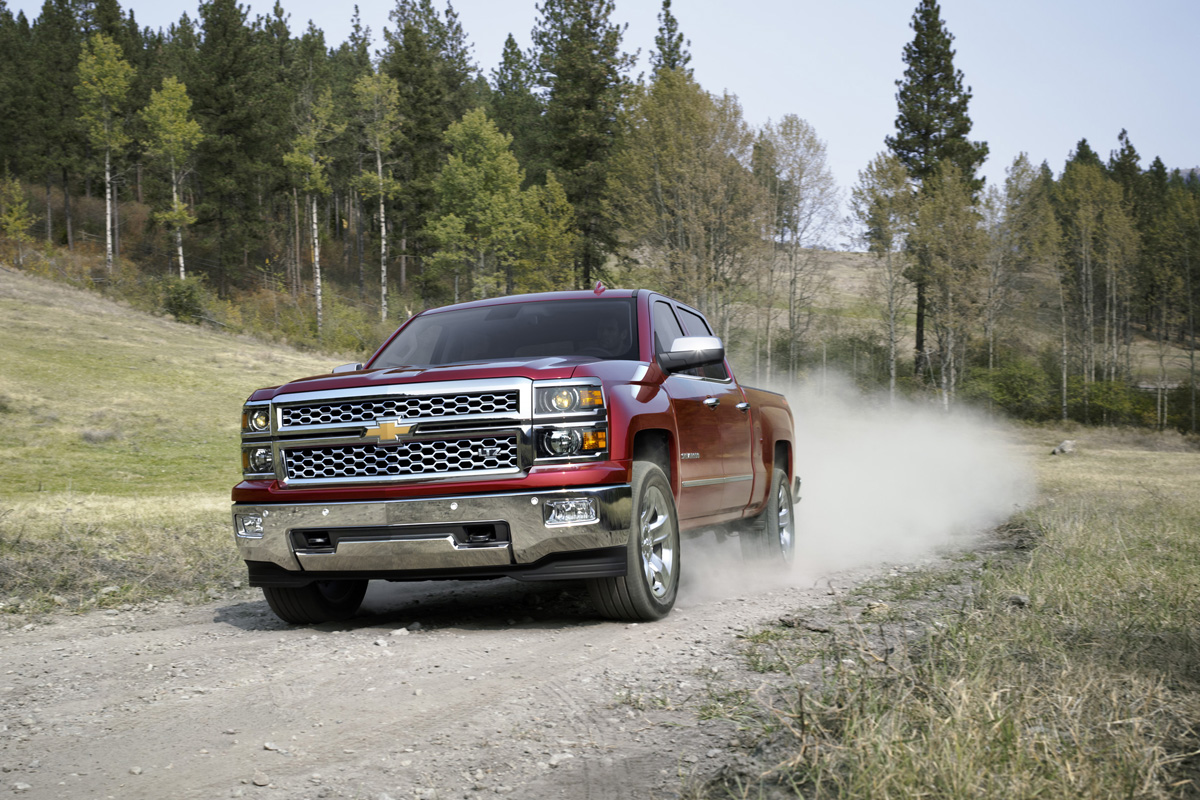 The new Stingray Corvette is a helluva ride – but it only seats two and can’t tow a whole lot. How about the same engine in something that can (and also seats five)? 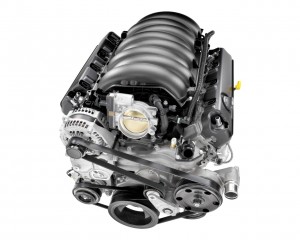 The 2015 Chevy Silverado 1500 is now available with the same basic 6.2 liter berserker used in the ‘Vette – and it’s a show you won’t want to miss. But unlike previous He-trucks (the Ford SVT Lightning comes to mind) this truck is not some 2WD-only tire-fryer useless for work. Its 420 hp will get you to 60 in 5.4 seconds, if you like. But it’ll also pull 12,000 lbs. – best in class – carry 4×8 sheets in the bed and a crew of guys inside the cab to the job site.

The strong-armed 6.2 liter V-8 is paired with a new (and also Corvette-shared) eight-speed automatic, and somehow manages to deliver better gas mileage than the weaker-engined Dodge Ram 1500 and and dead-heat matching the new F-150 on that score while making its smallish 5.0 liter/385 hp V-8 seem … well, small.

Of course, there are a few caveats… .

For one, the killer Corvette-sourced V-8 is only available in higher trim Silverados; ditto the eight-speed automatic (the Chevy’s smaller 5.3 liter V-8 is paired with a six-speed automatic).

Dodge includes an eight-speed automatic with every V-8 it sells.

Also – and this applies to the F-150, too – there’s still no diesel engine on the roster.

Dodge is currently the only brand that’ll sell you a diesel in a 1500 pick-up – and it’s available optionally in the lower-trim (Tradesman) versions that are still priced in the $20ks instead of being optional on high-trim versions that start well into the $30ks.

But hey, it won’t nail 60 in a bit over 5 seconds. Not without a JATO rocket strapped to the roof, anyhow. And if you look at the other numbers you’ll find the mileage disparity between the 6.2 Silverado and the turbo-diesel Ram isn’t going to save you all that much at the pump. Especially with gas now selling for just over $2 a gallon. It might not last, granted. But – as they say in Rome – carpe diem… seize the day.

It may not pass this way again! 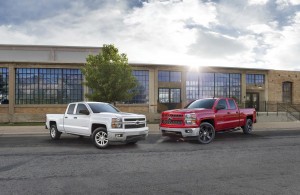 Three engines are available, two gas V-8s and one gas V-6. Unlike its main rivals – the Ford F-150 and the Dodge Ram 1500 – Chevy does not offer turbocharged gas or diesel engines – which has its pros and its cons (more on that below). 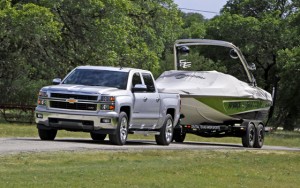 GM gave its 1500s a major overhaul just last year (2014) but there are several significant updates for 2015 that make the 2015 more than just another model year newer.

The big news, of course, is the availability of the Corvette-in-drag 6.2 liter V-8 and the new eight-speed automatic that comes with it.

Does it without turbos or other cost/complexity adders.

Abundant (and convenient) storage in the cab – and in the bed.

6.2 V-8 (and eight-speed automatic) limited to higher-end (and higher cost) trims; can’t get ’em in a regular cab/long bed Silverado.

No diesel on the options roster. 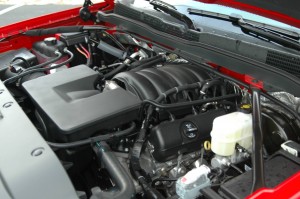 Previously (pre-2014) the Silverado’s base V-6 was so underpowered (190 hp in a full-size pick-up is like trying to light up a skyscraper with a backyard generator) it effectively forced buyers to option-up to the V-8, if they meant to do any work with the truck. That’s been dealt with most affirmatively. The Silverado’s base V-6 is now slightly stronger than the Ford F-150’s base 3.5 liter V-6 (283 hp) and only slightly less strong than the Dodge Ram’s standard 3.6 liter, 305 hp V-6.

It also makes more torque than both of them.

This engine is paired with a six-speed automatic and can pull 7,600 pounds – exactly the same rating as the other two when ordered with their respective standard equipment sixes. 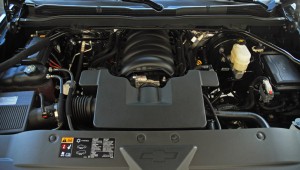 Another interesting wild card is the Ford F-truck’s new micro-turbo 2.7 liter “EcoBoost” V-6. It makes 325 hp and 375 ft.-lbs. of torque. Those are big numbers for a little engine – in a big truck. So is the 8,500 lb. tow rating Ford gives F trucks so equipped.

Acceleration with this engine – which comes paired with a new-for-2015 eight-speed automatic – is boggling. Zero to 60 in 5.4 seconds for the RWD version; a tick or two more for those with 4WD. 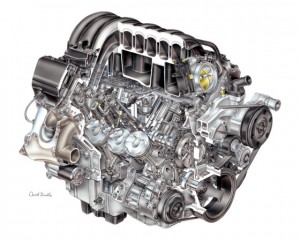 Corvette power, to be specific. The 6.2 liter V-8 is the same basic engine used in the new Stingray – enhanced with an 8.5 quart capacity oil pan (the ‘Vette’s capacity is seven quarts) and tuned (intake and exhaust) for more low and mid-range thrust.  The torque number (460 ft.-lbs.) is the same as the Corvette’s – but it arrives 500 RPM earlier – at 4,100 vs. 4,600 RPM in the Corvette.

The new eight-speed automatic is also shared with America’s sports car and when paired with the Silverado uses a neck-snapping 4.56 first gear ratio. Feed that to a 3.42 rear axle and the result is a three-ton pick-up that’ll run neck and neck with something like the 2015 Mustang turbo I wrote about a couple weeks ago (see here) and which is quicker than something like the Cadillac CTS “sport sedan” I reviewed last week. The fact of the matter is the 6.2 Silverado is quick enough to keep a new Corvette in sight… at least, until wind resistance at 120 or so begins to weigh increasingly in the Corvette’s favor. 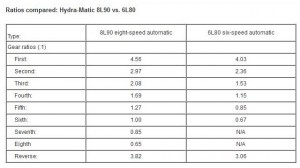 Cylinder deactivation (the big V-8 runs on just four cylinders during steady-state cruise another light-load moments) high (11.5:1) compression (which makes the most of each squirt of fuel) , direct injection – and the efficiency advantage of having eight rather than six forward gears is what makes it all possible. 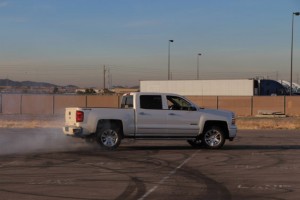 It’s a measure of how good we have it – if “we” means those who crave power – that you can buy a full-size pick-up that’s quicker than most classic-era muscle cars but which use less gas.

Even the middling 5.3 V-8 is a hauler of the mail. Hell, the base V-6 is stronger than any normal production truck V-8 you could buy back in the ’90s.

And Chevy has worked these miracles with oft-derided “ancient” technology.  The LS Series V-8s are two-valve/pushrod designs – superficially the same as the ur small block Chevy that debuted back in 1955. But the new ones flow oceans of air through alloy passages that have been honed and tweaked to such an extent that they outperform the four-valve/overhead cam (alleged “state of the art”) engines they compete with.

Also miraculous is the un-truck ride quality of this still leaf-sprung truck – solid rear axle and as much unsprung weight as Titanic in drydock. Well, maybe not quite that much – but still, it’s a heavy Chevy. But it feels amazingly light on its feet and easy to manage… except in tight confines such as narrow driveways and busy shopping mall parking lots. This cannot be helped. It’s a full-size truck and there’s no getting around the length and width. It comes with the territory. But once you’ve eased out of the slip and pointed her toward the open ocean, it’s a wonderful cruise.

Ground clearance varies from 8.2 inches to 8.6 inches, depending on the configuration.

The eight-speed automatic’s tire-frying/stump-pulling first gear ratio in tandem with a magnificent superfluity of horsepower literally lifts the front end almost off the ground if you do a dragstrip-style launch. Go out and torment some old GTOs. 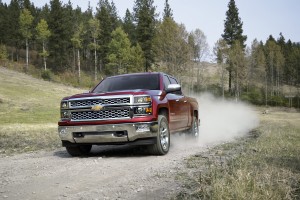 During part-throttle driving, though, the eight speed in my test truck sometimes wandered around the ranges, trying to find the “right” gear for the situation. This is probably inevitable with so many forward gears. I have experienced the same phenomenon in other new vehicles with eight and nine-speed transmissions. It’s the price we have to pay in order to continue to have access to big V-8s. That 2-3 MPG uptick made possible by these boxes is critical to the continued viability of engines other than sixes and fours – not because of consumer demand for less engine but because of the government edicts that gas mileage rise ever higher. 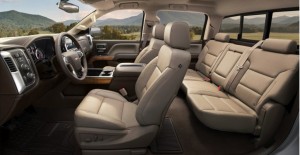 The Silverado’s not unique in that respect, of course. Both the Ram 1500 and the F-150 are also offered in regular cab versions (as is the Toyota Tundra though not the Nissan Titan). But you might want to “gather ye rosebuds while ye may” – as the regular cab (and long bed to go with it) configuration seems to be gradually fading away. That combo is unavailable in current mid-sized trucks like the new Chevy Canyon/GMC Colorado as well as the Nissan Frontier and Toyota Tacoma.

And no one sells a compact-sized truck in any configuration.

The “why” is easy to get a handle on when you realize that trucks have become at least as much about transporting people (in comfort) as they have traditionally been used for carting 4×8 sheets of OSB to a job site. 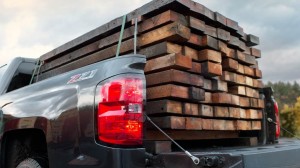 So, for the moment, you can still get a regular cab Silverado – and an eight foot bed to go with it. How much longer, though, is anyone’s guess.

The double cab comes only with the 6.6 bed, however.

Crew cabs (four fill-size doors) come with either the above 6.6 bed or a really short 5.8 foot bed.

Perhaps even more interesting, the regular cab/short bed Silverado itself is several inches shorter overall than its main rivals: 205.6 inches vs. 209.3 inches for the new F-truck and 209 inches for the Ram. The Chevy is also wider than both of them: 80 inches vs. 79.4 for the Ram and 79.9 for the Ford.

Trims range from the base Work Truck – which is still a very nice truck (AC, cruise control, power door locks, a decent stereo) – all the way up to the luxurious High Country, which rides on chrome 20 inch wheels and comes with a high-end Bose stereo, heated leather seats and eight-inch LCD MyLink touchscreen interface.

Standout available features include in-truck Wi-Fi Internet access, which comes on whenever the truck is on; foot-holds built into each corner of the rear bumper to make accessing the bed easier; a “damped” tailgate that lowers itself in a smooth, fluid motion and a rear-seat DVD/Blue-Ray player.

The Chevy is the second-newest of the “big three” – having been substantially redesigned for the 2014 model year and significantly updated for the 2015 model year. The updates have been more conservative relative to Ford’s fairly radical decision to go all-aluminum (and its earlier decision to shy away from V-8s in favor of turbo sixes… and now turbo fours).  But, arguably, conservative is a good thing when it comes to trucks.

The F-150’s new aluminum body may be lighter, but it will make the truck harder (read, more expensive) to repair – at least until body shops get comfortable working with aluminum panels. And the fuel efficiency advantage of the F-truck’s turbo’d sixes and fours is not spectacular (best case, 19 city, 26 highway for the four vs. 15 city, 21 highway for the Silverado’s more-than-twice-as-big and much stronger 6.2 liter V-8) and the cost to repair/replace those turbos may very well be exactly that (i.e., spectacular) eight or ten years down the road from now. GM’s fairly simple V-8s have fewer parts (two valves rather than four; just the one camshaft rather than two or four; and of course, no turbos at all) which necessarily means fewer things that could potentially go wrong – and these engines have a proven track record for being largely bulletproof.

I think Chevy ought to have at least made the new eight-speed automatic optional with the middle V-8 (the 5.3 liter) rather than exclusive to the 6.2 liter V-8. Still, this new combo rocks the truck world like Cheap Trick at the Budokan back in ’79.

I want you to want me!