Imagine a 40 percent tax on food – or some other essential.

People would be out in the streets.

Such a tax would be two things that Americans generally don’t like – disproportionate and regressive. A tax that is both obnoxiously high – and hits those least able to absorb the blow (middle and working class people) the hardest. It’s not cool to hammer people excessively. It smacks of bullying.

So, what is it with the gas tax?

Before the economy began to tank, when gas was still under $2 per gallon for regular unleaded, roughly 25-40 percent of the price you paid was purely tax. In some cases (CA, MA, IL and other states that have motor fuels taxes above 60 cents per gallon) it was closer to 45 percent.

It’s true the percentages have gone down – but that’s only because the price of fuel has gone up. You may be paying less tax today, in percentage terms,than you were four years ago – but you’re still paying a small fortune in taxes.

Plus the cost of the fuel.

If you live in California, for example, and buy 15 gallons of gas each week, you’re paying about $10-$12 every week in gas taxes. That’s about $500 per year – just for motor fuels taxes.

That ain’t chump change for most of us – especially now that the price of the gas itself is currently averaging about $1 more per gallon than it cost around 2006.

Unlike, say, the punitively high taxes on cigarettes, gasoline taxes are unavoidable. Any smoker can choose not to smoke – and thereby avoid the tax. But most of us who drive have to drive. We can no more dodge gas taxes than we can income taxes. And even if we don’t drive at all, everything we have to buy to live gets shipped by vehicles – which burn gas. And whose owners pay taxes – which are factored into the final price they charge us.

It’s why gas taxes are so crippling. They literally affect every nook and cranny of the economy. They are one of the major “drivers” of increased costs for everyone who isn’t a Ted Kazcynski-like hermit living 100 percent off the grid.

Greenies like high gas taxes because they want to discourage driving. At least, the driving of others. Al Gore will not be giving up the keys to his Escalade. (Check him out in his movie; they forgot to edit out the scene where he’s lecturing us about consuming while behind the wheel of his 15 MPG Caddy).

Politicians like gas taxes because they are sneaky. Unlike income taxes and so on, they are much less visible. The tax is folded into the price of the fuel – not added afterward. You never see a gas station sign that reads: Regular Unleaded $1.90 cents – Plus Tax. So people don’t notice. In fact, their ire is focused not on the extortionate government but on “Big Oil” – which never dared to rape the populace as brazenly as the government does.

Defenders point out that motor fuels taxes fund road building and maintenance. But public roads are unique in being the only vital public accommodation that depends on disproportionate, regressive taxation. Courts, public schools and parks aren’t funded by disproportionate and regressive taxes.

How come roads are treated differently? Why are they  treated as a preferential means of transport for those with more money? After all, the less you earn, the more costly it is to drive.

How is this fair?

I think there’s a case to be made for funding roads in a more equitable way. Other big ticket items in the federal budget get an annual appropriation. Why not roads? Or at least, why not Interstate highways?

Something ought to be done, at any rate. Because no matter how you may feel about encouraging (or discouraging) driving, conservation, energy dependence and so on, the blunt and ugly fact of the matter is that average Joes and Janes are the ones disproportionately hit by sky-high gas taxes.

They deserve some relief, don’t you think?

Income taxation is foul, too – but there are at least a few escape hatches left.

Especially if your income isn’t too high; then you pay next to no federal tax. You’re still po’, if course – but at least Uncle Obama isn’t (yet) demanding that you hand over another 25-40 percent in taxes on whatever meager means you have left.

But with motor fuels taxes, that’s exactly what happens.

The guy earning seven figures doesn’t even notice the 67.1 cents per gallon the state of California snatches from him at every fill-up. But how about the minimum wage pizza delivery guy? Bet the farm that $10-plus per gallon in taxes he pays at every fill-up matters to him.

Compounding the misery, people with less money tend to drive older, less efficient vehicles. By definition, they’re not in a position to buy a new Prius hybrid. More likely than not, they’re sputtering around in some hand-me-down Hooptie that eats gas like a ’75 Pacer.

So, the gas tax is a pretty mean-spirited – and highly regressive tax. It hits those least able to cope with its burdens the hardest.

This is why progressives favor progressive taxes on income. The rich pay more in proportion to their income than do average income people. I’m not in favor of progressivism (the new word for socialism) but I do have an idea that progressives should be able to get behind: Why not apply the same principle to taxes on essential items such as motor fuels?

Surely that would be more fair – the favorite word of all progressives?

The fact that 99.9 percent of all progressives (the Nice Way to say, control freaks) react like a chicken just shot in the tail with a pellet gun to such a suggestion tells you all you need to know about the progressive notion of fairness.

In fact, they want the opposite – to punish average people as much as possible for clogging up their roads and using their resources. It annoys Al Gore that he can’t get to the airport (and his private Gulfstream jet) on time because the proletariat is out there on the roads getting in his way.

That’s the key insight to make here. Gas taxes are regressive and punitive for a reason.

And that reason has about as much to do with saving the planet as Al Gore lecturing us about being green from the driver’s seat of his Escalade. 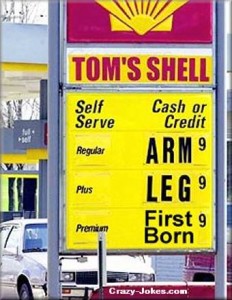