In the ’80s, it was tinny electronic recordings advising you that “the door is ajar.” 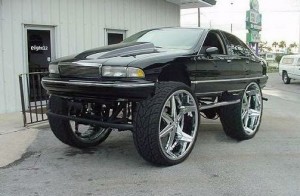 In the ’90s, it was auto-strangulating seatbelts that assaulted you as soon as you closed the door.

The sight of something along the lines of a clapped-out ’78 Caprice Classic worth $1,200 sporting $3,000 worth of tackier-than-New-Jersey-Hausefrau Cameltoe twennies is a spectacle unique to our era. Like curb feelers and jacked-up rear ends (redneck high culture) a generation ago. Only those things eventually went away. And – they were mocked as markers of low culture (and a low IQ) at the time.

The Big Shiny Wheel thing shows no signs of fading. And it has permeated all strata of the culture.

The look is now routinely emulated by the designers of brand-new $60,000 SUVs (see, for example, the new Range Rover Evoque – it comes standard with nineteens and twennies are optional, right from the factory). The surest confirmation that the ghetto has moved to the ‘burbs.

Where did it all begin? 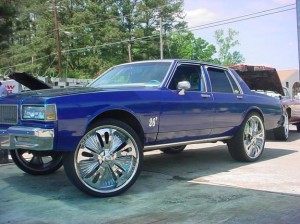 And will it ever end?

Larger (but not huge for their own sake) wheel/tire packages do have a functional purpose – up to a point. In the past, they were fitted pretty much exclusively to performance cars, for the purpose of enhancing their performance. A wider tire has a larger contact patch – and a shorter-sidewall tire flexes less – both of which improve things like steering response and cornering grip at high speed. But there are downsides, starting with a rougher ride and including higher rolling resistance from the increase in unsprung mass, more rapid tire wear and (almost always) much higher replacement cost.

In the context of a performance car, these liabilities are acceptable because the car handles, accelerates and brakes better. In other words, the larger wheels and tires make sense – they have a functional purpose – and the downsides are accepted in return for the enhanced functionality.

Or a new Camry?

At first, it was mere copycatting. Standard cars were made to appear sportier-looking by outfitting them with larger/wider/taller wheels. But it very quickly got completely out of hand – to the extent that today, even minivans routinely wear 18 inch wheels – which is utterly retarded given the purpose (and character) of minivans. Same goes for “crossover” SUVs and all the rest. From a functional point of view, shoeing ordinary A to B passenger vehicles with huge wheels/tires is as silly in its own way as fitting a performance car with ever smaller wheels and tires. 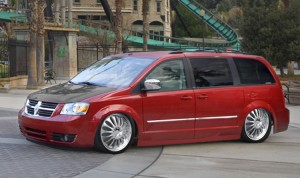 The aesthetic crime hardly needs to be discussed.

It’s as demented – and pointless – as people walking around wearing gigantic bulging codpieces. Which in a way is exactly what the current cultural obsession with ree-uhms  amounts to. Look at me – mine’s bigger. One can readily imagine a pair of silverback gorillas posturing – threat displays designed to attract a mate. Or crows pecking at a piece of tinfoil.

Every time I see a PT Cruiser (usually also outfitted with glue-on fake chrome portholes) or an Escalade riding along on its twennies a Vesuvius of bile starts to churn in my guts. It’s like seeing the wrinkled up tramp stamp above the ass crack of a 47-year-old wearing hip huggers. It just doesn’t look good – and the whole thing, besides, is about as original as a barbed wire arm tattoo  or a Van Dyke beard at this point. Can’t the culture come up with something else? Maybe, something different? 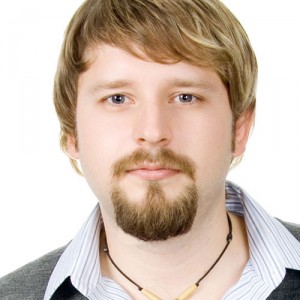 Is this as original as it gets? Twenty years in? Will we call it a day at twennysixes?

I keep hoping it’ll all go away – like bell bottom corduroys.

But rap “culture”– which gave mass culture its current obsession with ree-uhms – shows no sign of losing steam, even after 20-plus years of defiling America more thoroughly than a TSA goon fondling your 14-year-old daughter. It has killed off music (you know, the playing of actual instruments by musicians) and made displaying your underwear and butt cheeks in public the very height of fashion – as opposed to evidence of homelessness. Remember Derelicte from Zoolander?

Ree-uhms are the perfect accompaniment to this ensemble of civilization deconstruction.

In the ’80s, people thought that when the SHTF, the aftermath would look like The Road Warrior – guys in football pads driving around in V-8 interceptors searching for gazzuline.

Well, it looks like it’ll be a pimped-out Caddy with a gold-toofed thug sporting his ree-uhms looking for a blunt instead. No, worse than that. It’ll be a pathetic suburban kid trying to imitate the gold-toofed thug in his mom’s brad-new $60,000 SUV, blaring rap music as he rolls along on factory-installed twennies.