Risk is fun – and risk is part of life. Otherwise, we’d never get out of bed. No, rewind some more. We’d never leave our mother’s uterus. 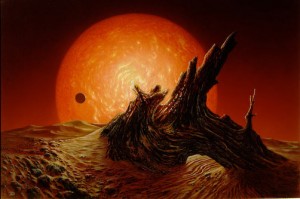 This idea that risk – note, not recklessness, not irresponsibility – just “risk” – is something to be stamped out at all costs is perhaps the most cancerous notion of our era, right behind egalitarianism and democracy.

Columbus accepted some risk when he set sail across the ocean sea. It would have been much safer, I suppose, to stay home. But then we’d not even know his name – much less celebrate a day in his honor. Those bold men who strapped themselves into a tiny capsule mounted on a very large Saturn V rocket and rode it all the way to the Moon took a risk, too.

Risk is rightly viewed as synonymous with challenge – which necessarily entails the possibility of failure. One does not seek it, one is aware of its possibility. But one accepts the possibility as the necessary price to be paid in order to meet the challenge. To strive, to achieve. To be competent rather than complacent. To do – as opposed to not doing. Risk is the very thing that makes human progress possible. To refuse to act – or to limit action – until and unless all risk is removed is to negate the possibility of acting. It is to embrace stasis – and even that amount to a false sense of security, since failing to act out of fear of risk can itself be lethally paralyzing. Think of the prey animal that freezes rather than bolts at the sight of a predator.

Yet risk-avoidance has become the cornerstone of the red giant phase American police state, whose lurid glare we all live under today. Every new authoritarian measure is proposed – is justified – on the basis of risk-avoidance, no matter how infinitesimal the risk. Any risk is too much risk. No price too high, no imposition too extreme. If it makes us safer. If it reduces some risk. 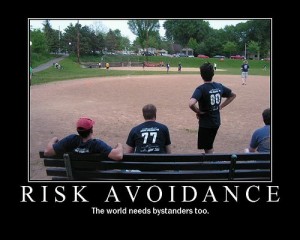 Recently, for example, the government issued a ukase that all new cars will have back-up cameras as standard equipment – even though the number of children (and others) run over by a backing-up car (more precisely, an incompetently backed-up car) is too small to even be described as a fraction of a fraction. During the past ten years, the government claims about 650 flattened toddlers. A tragedy for those involved, certainly. But does it constitute a national epidemic – a risk so great that it justifies forcing every single person in a nation of 310 million people who wishes to purchase a new car to also purchase a back-up camera?  Do the math. What is the ratio? The percentage? Let’s call it an even 1,000 – out of 310 million.  Oh, yes. I forget. If it saves even one life.  That is the mantra.

And the result of allowing it to pass, unchallenged by reason, is that costs will be imposed on 310 million – most of whom face an immeasurably tiny risk of ever being backed-over by an SmooVee. But who will be throttled (and charged) in the name of avoiding this picayune risk.

Passing zones are disappearing. Too “risky.” More probably, not enough revenue was being generated when people could lawfully pass. The most grotesque assaults on our former right to travel unmolested are committed against us in the name of risk-avoidance.

Kids can’t play football – or even play outside. Too risky. I like to backpack. I wonder how long it will be before that, too, is declared too risky. I might fall. I might twist my ankle. I could pass out from dehydration. A snake might bite me on the ankle. There are no cameras in the woods, no emergency call boxes. It is all very, very risky. But not really. The majority of these risks – like the risks discussed above – can be reduced to almost nothing by prudent action and common sense. I watch where I step. I wear boots that prevent my ankles from flexing too much in the event I lose my footing. These keep me safe from ankle-biting snakes, too. I carry plenty of water – and keep a gun at my side for just-in-case. These put my risks down to the peripheral. They are still there. Yes, something could happen.  But it probably won’t.   And so, I am willing to assume the risk – rationally, reasonably. 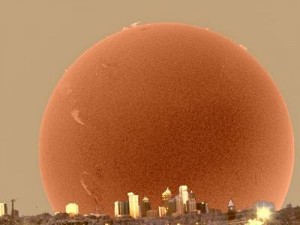 It is – or ought to be – the same in other aspects of life, cars included. There is, for example, an element of risk involved in not wearing a seat belt. But the risk of being involved in an automobile accident can be greatly reduced by attentive, skilled driving. In which case, the not-wearing of a seat belt incurs virtually no risk at all. But rather than encourage rational risk reduction by prudent individual action, our red star police state pulsates with authoritarian fury at the merest suggestion of a theoretical risk – and pours forth its radiation upon us.

And the end result is not unlike living under the sway of an actual real-life red giant sun: We are forced indoors, our actions curtailed and limited. Everything we do is done under the oppressive heat and remorseless, never-flinching gaze.

I’d rather run a little rational risk now and then myself. Even if it means I occasionally get a sunburn.

Heroes and Their Tazers