Let’s say you’re unlucky enough to live in a state that has a mandatory “buckle up for safety” law. But you prefer not to wear a seat belt – for any of several perfectly valid personal reasons, none of which are anyone else’s business or at least, not the government’s business. Not unless you also believe that whether you eat your veggies, exercise three times a week and get a good night’s sleep each night are also ticket-worthy matters of public concern.

So, you don’t wear the belt.

You go about your business, harming no one. One day, Officer Not-So-Friendly issues you a ticket for not wearing the belt. This irritates you, because you don’t accept the right of people who aren’t your spouse or your parents to lecture you about your personal lifestyle choices – much less cotton to the notion that the state has any legitimate business harassing (fining!) you over such things. You accept that the state has the right – the duty – to intervene when your actions cause harm to others. But how is not wearing a seat belt a threat to anyone other than oneself? And is that any more the state’s business than the girth of one’s waistline? Or one’s diet? One’s recreations? Of course not. This is America – not nursery school.

So, you crumple the ticket into a little ball and throw it where it belongs – in the trash.

A few months down the road, you find yourself coming up on a “safety” checkpoint. You are forced to stop your car, roll down your window and hand over ID and other paperwork to another Officer Not-So-Friendly. He informs you that your “privilege” to drive has been suspended on account of your having not paid the fine for the seatbelt ticket of several months back. But he “gives you a break” – and says he’ll only issue you a ticket, which will be dismissed later on provided you pay the original fine. You of course have no intention of paying the fine but, wishing to end the encounter and be on your way, sign the new ticket and prepare to drive off. “Buckle your seat belt,” orders Officer-Not-So-Friendly. You do not. And drive off.

Now you are ordered out of your car and arrested for driving a motor vehicle without the requisite permission slip. And for refusing to wear your seatbelt.  Your car is hauled off to the impound lot. 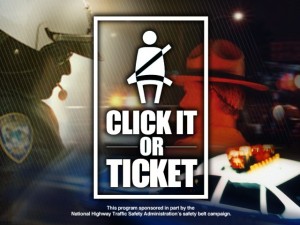 Several hundred dollars later, you bail-bond yourself out of the Hotel Graybar and your friend (because you have lost your “privileges”) drives home your car.

Now things begin to get heavy.

Because you were convicted of driving without a valid/current permission slip, your insurance company has cancelled your policy. Since insurance is mandatory, if you want to keep your vehicle legally registered, you are forced to go begging to another one of the cartel’s members – which makes you an offer you can’t refuse: No insurance, or SR-22 insurance – and a premium jump from the $300 a year you were paying as a “good driver” with no accidents or claims filed against you to $2,000 a year as a newly minted “bad driver” – based on the record of your driving without permission because you didn’t pay the original seatbelt fine.

Well, you have a mortgage and other bills and only so much money – unlike the state, which has limitless access to millions of helpless victims’ pockets. So you decide not to purchase the “service” you are ordered by the state to purchase. You also decide that, on the principle of the thing, you will not pay that seatbelt fine.

A few weeks later, you go to get the mail and find a letter from the DMV. A random spot check has discovered that you have a currently registered vehicle that’s not covered by insurance, as per law. Your  driving “privileges” are now revoked rather than merely suspended and you are ordered to pay another, even larger fine. Which you decline to pay. Check Sprouts Ad and Albertsons Ad.

At which point, you have become Tazer bait. Defend yourself against the uniformed goon and you become a felon.

All because you refused to pay a fine for an “offense” that’s of a piece with ignoring a high school hall monitor – only the assistant principle wasn’t armed and usually  the worst he could do was order an afternoon or two’s detention.

This is not America. Or rather, it’s not what America was.

Is it not a tragic thing that we’ve allowed the country to become a large-scale reformatory in which almost everyone is guilty of some “offense” against the system – but hardly ever guilty of committing an actual harm?  In which we’re treated like idiot children by heavily-armed busybodies empowered and prepared to do literally anything to us in order to obtain our submission? And to what end? Or rather, where does it end? Will it actually get to the point that armed men will hover over our dinner tables to make sure we’ve eaten all our veggies? Will we have “physical jerks” in front of the TV each morning a la Winston Smith in 1984?  What will prevent things from going that far?

The answer, of course, is – nothing.

Nothing, that is, short of a wholesale rejection of the idea that how we live our lives is anyone’s business except our own – so long as we’re not harming anyone in the process. And a renewed appreciation for what Jefferson styled the pursuit of happiness. Our right to live our lives as we see fit, no matter what others may think of our choices, free of nannying-at-gunpoint. 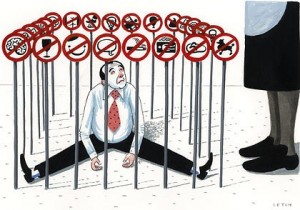 I hope I live long enough to make it to the day when Americans – enough of them to turn the tide – recover their senses.  And learn once more to live – and let live.