The government enacts laws – or issues regulatory fatwas – requiring that new cars comply with various “safety” standards. Ironically, the result of these standards – in terms of vehicle design and otherwise – may just be cars that are less safe to actually drive. 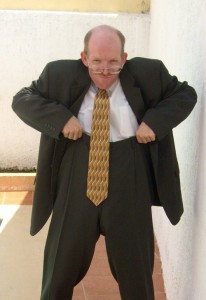 For example, you may have noticed that the beltline (door height) of the typical new car is higher up than was typical in the past. This makes it feel as though you’re sitting lower in the car, as you’re surrounded by a bathtub of steel. (No more resting your arm on the top of the door as you drive with the window rolled down.) Beltlines  are higher to meet increasingly stringent side impact standards. But for every action, there is a reaction.

To maintain reasonable overall proportions, the designers abbreviate the vehicle’s side glass height to make up for the higher doors – and rake the front and rear glass. You get a “chopped” look. (Otherwise, the vehicle would look overtall.) But reduced glass area means decreased visibility – and this along with the now-commonplace steeply raked glass (in particular, the rear glass) results in a diminished view that’s also frequently distorted on top of that.

You can’t see as much – and what you do see isn’t seen as clearly.

Another factor impinging negatively on visibility is the growing thickness of the car’s A, B and C pillars (roof crush standards – as well as making room for side-impact air bags) in addition to taller/thicker seat headrests (whiplash). In several new (2013) cars I’ve driven recently, it is very hard to see cross traffic coming at you from either side –  making it much more dangerous to enter a busy intersection. Blind spots are larger, too – requiring more situational awareness of drivers – who are not infrequently more aware of their sail fawns than what’s going on around them as they drive.

You have to drive an older car to get a sense of how much has changed. The other day, I went for a ride in my friend’s ’63 Buick Special sedan. You felt like you were in a greenhouse. Excellent visibility all around. They used to make “pillarless” sedans – no B pillar at all – so when you rolled down the front and rear side glass, the entire area was completely open. Not anymore. It’s illegal.

Apparently being able to see is less important (to the government) than what happens when you roll the car – even though you are far less likely to roll the car if you can see.

The government has tacitly admitted there’s a problem – caused by itself – by demanding that all new cars be equipped with closed-circuit TV systems (back-up cameras) for the simple reason that it’s increasingly difficult to see what’s behind you when you’re backing up a new (government-approved) “safety” vehicle. But that Band-Aid causes its own slew of problems, including limited peripheral view and a distorted view relative to what a functioning human eye connected to an operating human brain would otherwise perceive. It is much harder  (if not impossible) to see a kid on a bike coming down the sidewalk into the path of the backing-up car – because the camera has a limited field of vision. It can’t “see” the kid until the kid is within its narrow field of vision. It is also possible to get some regular products here. By which time, it is already too late. Drivers who rely on the camera rather than their own two eyes may end up having a very tragic morning some day. 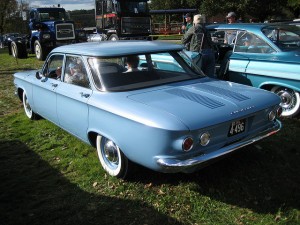 A lower beltline – and larger rear glass – would arguably be a lot safer. It would certainly cost less (back-up cameras are expected to add at least a couple hundred dollars to the purchase price of a new car, as well as increased down-the-road maintenance costs since the systems will have to remain in operational condition – as a government required “safety” feature – for the life of the vehicle.)

Here’s another one: Most new cars no longer carry a full-size spare tire. Not as a result of “safety” mandates – but because of pressure to comply with fuel efficiency mandates. A full-size spare is pretty heavy. A mini-spare is half or less the weight. So, what’s the problem? Driving around on three normal-sized tires and one skinny minny often results in a very evil-handling (and braking) car. Most new cars come with pretty aggressive wheel/tire packages. Seventeen and eighteen inches being pretty much the norm – along with at least 60-something series tires. You hit a roofing nail and one goes down. You put on the mini – which  might be literally half or less the width of the normal tire and with a completely different (temporary use only – it says so right there on the sidewall) tread pattern/design. You have to be extra careful – and hope it’s not necessary to brake suddenly or swerve. Because if you do, the car will probably react weirdly. If you’re not ready for it, you might end up in the ditch. 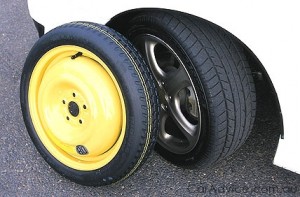 But, your car got one-tenth of an MPG better gas mileage.

Thank Uncle for that as you wait for the wrecker.

Reader Question: The Volt and Octane?