A mile-high tidal wave could not do more damage to human beings than the unnatural force called government. In terms of outright mass murder – line ’em up at the edge of the ditch and mow ’em down – government has no equal. Jeffrey Dahmer – America’s most prolific serial killer-cannibal – got maybe 40 victims over a ten-year period. For Uncle Sam, that’s not even an afternoon’s work. In “peace” time. 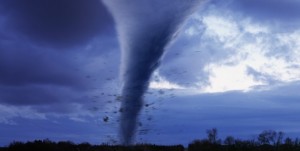 According to a study published in the Feb. issue of the academic journal, Injury Prevention (see here) there has been an Everest-like ascent in motorcycle injuries during the past decade. Older riders (age 60 and over) are getting hurt the most – up 247 percent, from 4,300 injuries per year in 2001 to 15,100 in 2008 – but it’s not just them. Accidents involving riders in the 40-59 bracket are also up 61 percent; for riders in the 20-39 bracket, it’s 28 percent.

More people of all ages are riding.

But why the sudden uptick in motorcycle riding? 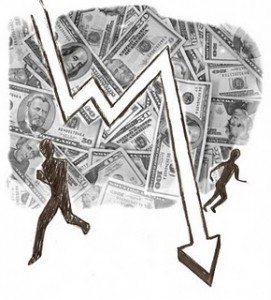 Or rather, follow the lack thereof. The ridership explosion has tracked in correlation with the economic implosion. You know – the unnatural disaster caused by government.

More people have taken to riding because it’s less expensive to ride than it is to drive. One can buy a 60 MPG-capable commuter bike for about 75 percent less than the cost of a 50 MPG Prius. And the bike only costs about $10 to fill up – vs. $40-$50 for the Prius. It’s a great way to cut down one’s costs of getting around.

A rider is not only more vulnerable than a driver, he’s more at risk if he’s an average (or less) rider – because it takes a great deal more in the way of physical and mental skills to competently ride a motorcycle than it does to drive a car. Excellent vision – and excellent reflexes (including physical flexibility, such as being able to quickly turn one’s head, shift one’s weight in the seat – and so on) are not required. But without them, your odds of going down are probably much greater than they would be inside a car. Because in a car, maintaining control is not as dependent on the driver’s physical capabilities. There are also more – and different – tasks one must handle. For example, almost all motorcycles have manual transmissions as well as separate front and rear brakes that must be operated individually, yet in a mutually complementary way. And there are unique tasks – such as learning to steer by learning to lean – that require physical skills some people don’t have. Or don’t have enough of. 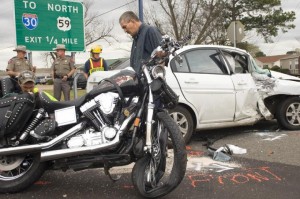 Historically, the higher skill threshold involved – and frankly, the fear – acted as a kind of natural check on motorcycle mayhem.

Much in the way that skiing has for the most part been a niche hobby. Something only a relative handful of people – most of whom had the skill/experience necessary to do it successfully – got into doing. Likewise, bikers chiefly rode because of the fun of it. And because they could.

Not because of the economics of it.

Now – out of desperation – lots of people who probably ought not to be riding are taking it up. And ending up badly.

Ironically – sadly – the uptick in bike accidents has happened despite the fact that bikes today are in numerous ways far safer to ride (if you know how to ride) than the bikes of the past. While that is also true of cars, it is much more true of bikes. The typical 1970s-1980s-era motorcycle was – in terms of important things like brakes – roughly where cars were circa 1955. It was commonplace for a ’70s bike to have a single nearly useless disc bake up front (if you were lucky) and an utterly useless drum brake out back – but often, an engine capable of pushing the bike to 130 MPH in less time than it took most cars to get to 70. The suspensions were typically terrible, the headlight inadequate and the tires insufficient. They were scary – which was part of the attraction, of course. But it did help keep many people who had no business riding from even thinking about it. 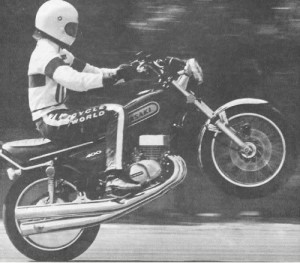 Modern bikes, on the other hand, are like modern cars in that they are deceptively easy to ride. Even elite high-performance sport bikes are startlingly docile-seeming . . . given what they are capable of (0-60 in 3 seconds; 9 second quarter-mile runs; top speeds approaching 200 MPH). Big touring/cruiser bikes are super-comfortable and friendly-feeling. Until the day its 60-something newbie rider sweeps over the double yellow in a curve because the 800 pound bike got away from him.

I wasn’t able to sift it out, but I suspect the stats in the Injury Prevention piece also include scooters and mopeds. These have become even more attractive than bikes – as an economic end-run – because they’re (typically) even cheaper to buy and (usually) much more fuel-efficient (some are capable of 100 MPG or even more). And: Many people who’ve been convicted of “drunk” driving resort to a moped or scooter to get around – because in many jurisdictions, a permission slip (i.e., a driver’s license) is not required to operate them.

They’re also easier to ride – because most are automatic and also what’s called “step-throughs.” Unlike riding a motorcycle – which is more like riding a horse – with mopeds and scooters, you don’t throw a leg over. Instead, you step through and sit down – with a riding position very much like sitting at a desk.

But, these not-quite-bikes have their own set of issues – in addition to the motorcycle issues discussed above. Most of them are really slow; some have top speeds no higher than 40 MPH or so. This often means they’re incapable of keeping up with traffic. Cars tailgate and swerve as they try to get by the moped doing 40 on a road where traffic is running 55 or 60. Not infrequently, they swerve into the moped or scooter rider. 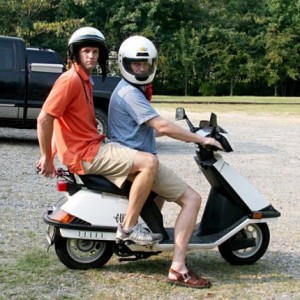 Nonetheless, moped and scooter sales have – like bikes sales – dramatically upticked in recent years. Arguably, out of economic necessity.

And thanks to government. Its policies – and their destructive effect on people’s financial well-being.

But government is never held to account for the mayhem it causes – whether directly or indirectly, consciously or not. For some bizarre reason (lack of ability to reason, actually) many people give government a pass – accepting outcomes that would never be accepted if they were the result of the actions of private individuals or privately owned businesses. When GM cheaped-out on the design of the early Corvair and a few people got in over their heads (and some got killed) there was hell to pay. But when government policies lead to mayhem, most people shrug it off as the cost of doing business.

What was it Stalin said?

A single death is a tragedy – a million deaths, a statistic.