“The Fight Has Officially Been Brought To My Front Door”
Mac Slavo
SHTFplan.com

When certified firearms instructor Shawn Moore posted a photo of his 11 year-old son on Facebook the last thing he expected was a SWAT style raid on his home. The picture showed his son, a licensed hunter, holding his new birthday gift, a .22 caliber rifle. 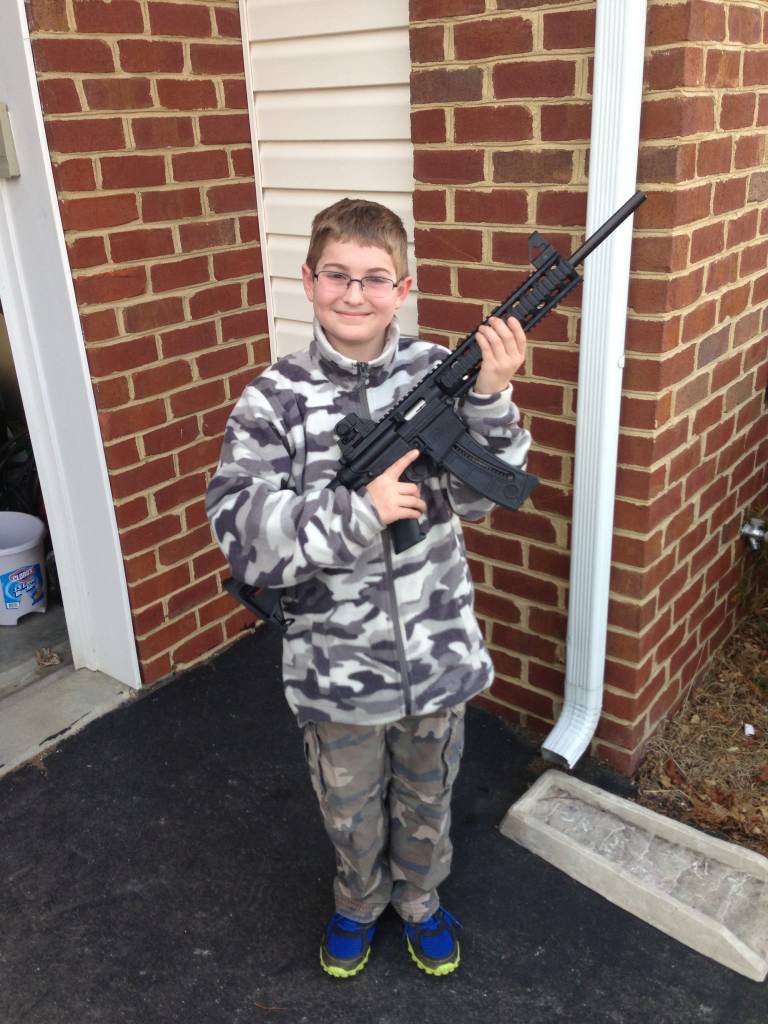 While Moore’s son proudly displaying his semi-automatic personal defense rifle was completely legal, an anonymous tipster contacted New Jersey’s Department of Children and Family Services and declared that the Moore family was neglecting and abusing their child, an unfounded accusation that led to the mobilization of local police who were apparently not at all concerned with the unconstitutionality of their actions which violated numerous protections of the Moore family including their right to bear arms, their right to be secure in their homes, their right to speak freely, and their right to be considered innocent until proven guilty.

Of critical importance is that the police who raided the Moore home never even saw the photo.

“It was all hear say. Just a phone call saying someone saw a pic of a child holding a gun,” reports Moore.

Last night I was out with a buddy of mine. I got a text from my wife that the cops and DYFS [Division of Youth and Family Services] are at the house and they wanna check out my guns and needed me to open my safe.

I’m instantly on my way. I get in contact with [attorney] Evan Nappen on the way. I explain the situation.

I walk in my house and hand the phone to the first cop I see. Then direct all of them outside. DYFS got a call because of a pic of my son holding a gun.

They wanted to look around and check all my guns out, make sure they were all registered.

Obviously that didn’t go well because I refused.

I had Nappen on speaker phone the entire time so they had to deal with both of us. They kept trying to pressure me to open my safe. They had no warrant, no charges, nothing.

I was told I was being “unreasonable” and that I was acting suspicious because I wouldn’t open my safe. Told me they were gonna get a search warrant. Told em go ahead.

Nappen (my lawyer) asked me for the DYFS workers name. She wouldn’t give it. I asked for credentials and she wouldn’t show them. I tried to take a pic of her and she turned around real fast and walked away.

After a while of them threatening to take my kids, get warrants and intimidation they left. Empty handed and seeing nothing.

Police and Family Services overstepped their bounds when they illegally entered this man’s home, demanded he open his gun safe, and threatened to take away his children because of an anonymous tip based on absolutely zero evidence.

This is the world in which we now find ourselves, where an American exercising his right to bear arms is considered suspicious simply because he refuses to give up his Constitutionally protected rights.

If you resist in any form or fashion you are immediately considered a criminal or terrorist.

The government and its storm troopers will continue to act brazenly, violating the rights of Americans until they are held accountable. As citizens, we are left with no other choice than to resist the tyranny and fight back, just as Shawn Moore did when they came for his guns AND his children. We can do this by understanding the laws of the land, and by documenting every interaction with officials of the government, who will stop at anything to pursue their agenda and stroke their own egos.

They will come to each of our front doors, and when they do, we must resist. We must fight back with every tool our Founding Fathers afforded us.