Just as entomologists are always discovering some new species of beetle, new forms of Clover are constantly being identified and cataloged.

Here, fresh from recent field research, are a few of the latest finds: 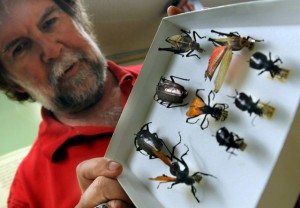 This well-intentioned Clover has a politeness fetish that turns out to be rather rude. He will stop his car in the middle of the road and then wave another car waiting to make a right turn onto the road ahead of him. No doubt he feels good about his generosity – and probably, the driver waiting to merge is happy to have been given the opportunity. But what of the drivers behind Clover whose travel was interrupted? And what of “the law” – which Clover worships like a pagan idol? The law that says stopping in the middle of the road (absent a red light or pedestrians crossing) is illegal? Why, it is dismissed as blithely as the laws which state one must yield to faster-moving traffic and numerous other laws besides. It is a defining taxonomical characteristic of homo Cloveronis that “the law” (paraphrasing the Humpty Dumpty) means just what he chooses it to mean – nothing more or less. 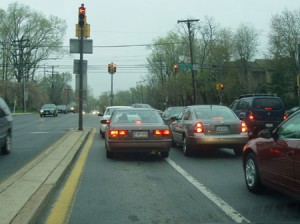 This Clover will tailgate the car ahead when it’s moving, but when traffic stops – as at a red light – Clover will typically leave half a car length between himself and the car ahead. Usually, this is just enough to prevent the car(s) behind Clover from accessing the left turn lane that bleeds off from the main road. And Clover – being Clover – will rarely deign to look behind him and thus, notice the guy behind him is trying to angle his car through the space – and do the decent thing and move up some so that the other driver can make the light. Sometimes, Clover will notice – and still won’t move his car up. Even when the driver behind gestures or taps his horn. Clover takes this as an aggressive act – and reacts passively aggressively, by deliberately blocking the space.

It is rather amazing that the species survives to reproduce. It may not realize the debt it owes to the forbearance of those it habitually tortures with its inconsideration. 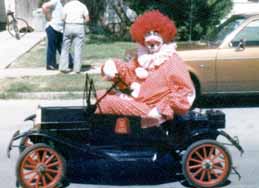 We’ve all encountered this common form of Clover. You’re driving on a road with two lanes in each direction of travel. Up ahead, two cars, one in the left lane, the other in the right. Clover’s the one to the left. The one who exactly matches the speed of the car to his right – such that None Shall Pass. This iron law of Clover Conduct  holds regardless of the speed of the car in the right lane. It might be doing the speed limit – or more. Or less. It does not matter.

Clover will pace him – in order to thwart you.

When Clover misses his exit (having failed to pay attention/anticipate) he will sometimes simply back up. Right there, on the shoulder of the highway. It is almost a mathematical axiom that there will never be a cop around to witness this. They are busy manning radar traps, enforcing the speed limit Clover venerates above everything else. 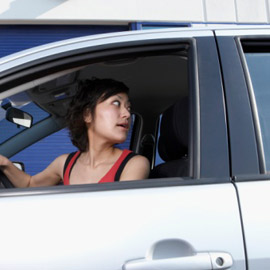 Except, of course, when he himself happens to be “speeding.”

So, you’d like to fill up. But, you can’t – because Clover is filling up. More precisely, was filling up. He finished about 10 minutes ago, but did not move his car before heading inside to get Cheetos and Fanta (part of Clover’s staple diet). He just parked there, oblivious to the possibility that other people might be waiting to fuel their cars. It goes without saying, of course, that Clover didn’t pull up to the pump  farthest down the line, so that the other pumps are accessible. Clover likes to conserve his energy, so he always, invariably, pulls up to the first available pump – even if there are two or three pumps down the line. Forcing you to go around (if you can) and back up.

You are waiting at a signaled intersection (yield on green) in the left turn lane, looking for an opening to proceed. Across the street – opposite you – is the left turn lane for opposing traffic. A Clover – often driving a monstrous SUV – will pull in. And pull wide (huge gap between his vehicle and the curb) such that now it’s hard, if not impossible, to see oncoming traffic in the travel lanes.  So, you’re stuck – until Clover clears the intersection and you can see what’s coming again. 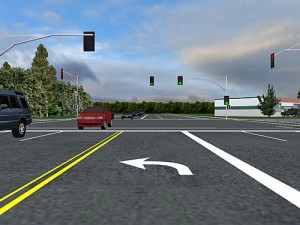 He loves his music so much he wants to share it with the whole, wide world. He will usually be the guy – it’s almost always a male of the species – in a car worth $1,800 with a $5,000 stereo capable of projecting sound waves that can be physically felt as they reverb into your space. But, that’s the key. Clover cannot conceive of your space – or anyone’s space, except his own. The world is Clover’s space.

That’s what he’s  trying to convey by radiating his “music” for a quarter mile in every direction.

“hero” Hassles Trucker Because He Hasn’t Made His Bed