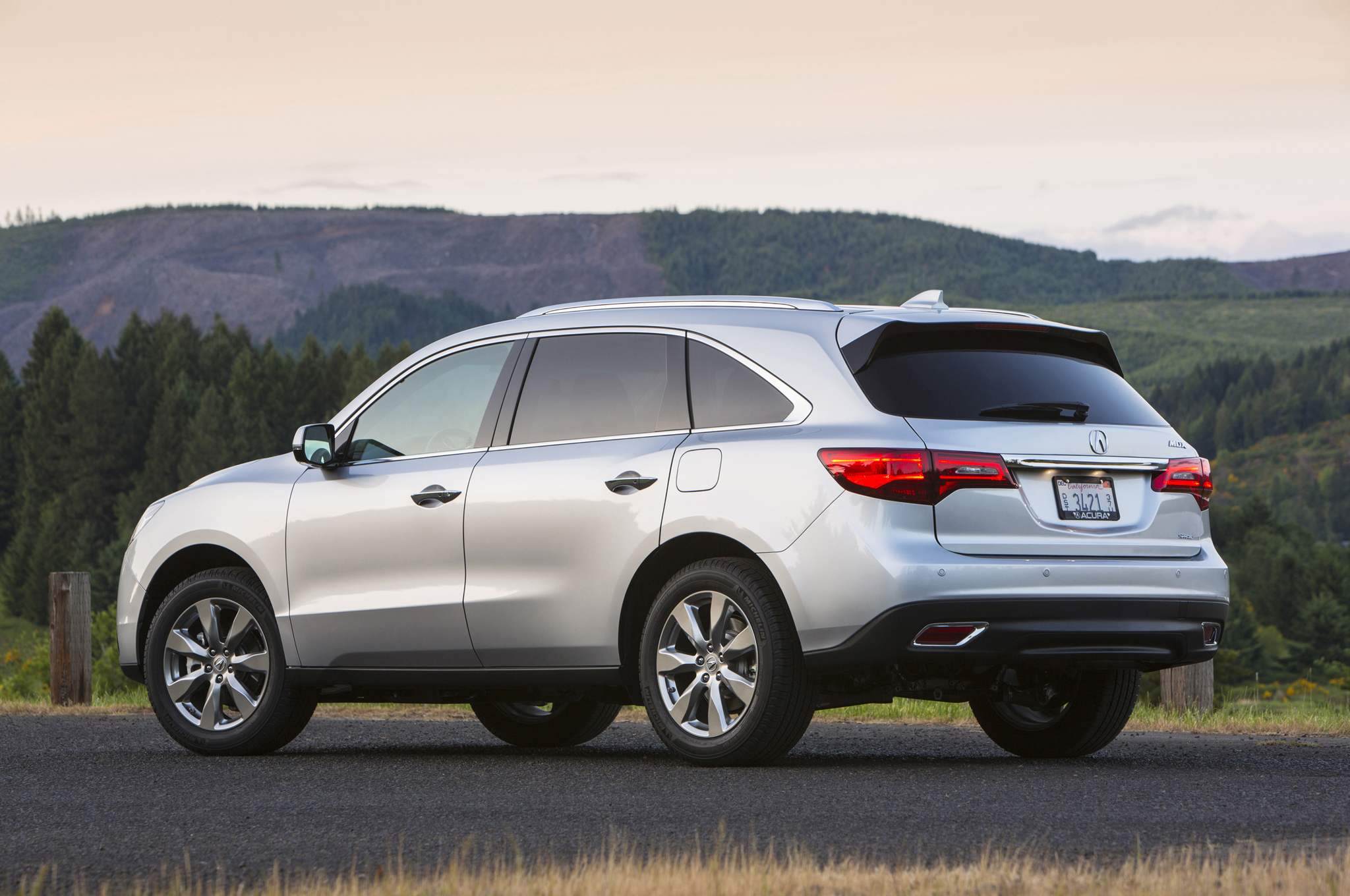 Acura has performed a Jenny Craig miracle with the new MDX. The just-updated 2014 is bigger – and quicker. But it’s also much lighter (by more than 500 lbs.) and a whole lot less thirsty (28 on the highway now vs. 21 before). 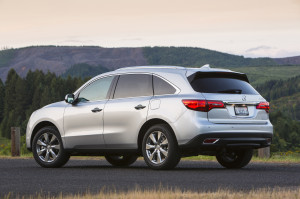 Did I mention the new MDX costs less to start, too?

The MDX is a luxury-sport crossover SUV. Its main competition is the Lexus RX, but the MDX is sportier – and unlike the Lexus, the Acura comes standard with a third row and room for seven.

Prices for the 2014 – which has been thoroughly redesigned for the new model year – begin at $42,290 with FWD and top out at $56,505 for an AWD-equipped model with the optional Advance and Entertainment packages, the latter of which includes a wide-screen (16.2 inch) DVD system and 115V household-style power point. 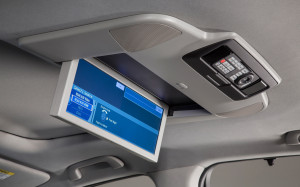 One of the new MDX’s unusual tech features is a semi self-steering system.

Also available is solar-sensing climate control that automatically adjusts interior temperature in accordance with the intensity of exterior sunshine.

The works. The ’14 MDX is built on an all-new platform – one not shared with the current Honda Pilot.

Direct injection (a step up over mere EFI) is now standard equipment – and this contributes to the ’14’s improved performance and economy.

Also, for the first time, AWD is no longer standard – which accounts for the lower to-start sticker price, as well as the lower as-it-sits curb weight. 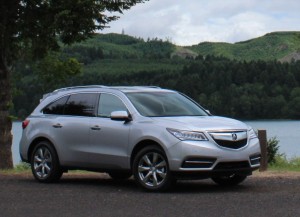 Lighter, quicker, cheaper (to start) and much less thirsty than before.

Available SH-AWD system is more sophisticated than AWD systems in the competition.

More adroit handling/feeling than the competition.

Cutting edge technology. MDX offers things (SH-AWD) competitors don’t and does things (like steer itself) that few competitors can do.

Cutting-edge equipment such as the semi-automatic steering may encourage passive – inattentive – driving. 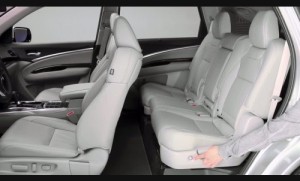 Single screen entertainment system is big picture – but makes it impossible for two people to watch different movies at the same time.

Second row legroom has been reduced. 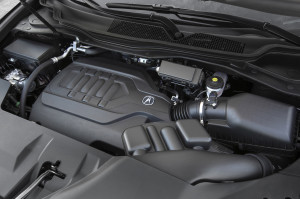 The difference also shows up at the pump. The new MDX rates 20 city/28 highway with FWD vs. a guzzlicious 16 city, 21 highway for the 2013. Even when equipped with the now-optional SH-AWD system, the 2014 is noticeably more fuel-efficient: 18 city, 27 highway.

But the main one-up the Acura has over the Lexus – over the other crossovers you might buy for about the same money – is its available Super Handling All Wheel Drive (SH-AWD) system. The acronym may be clunky, but so equipped, the MDX is an exceptionally poised as well as capable crossover. 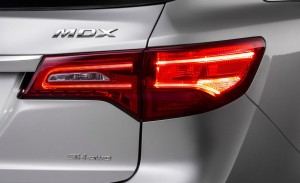 Unlike most other AWD systems, which are set up to be FWD dominant almost all of the time and which only kick power back to the rear wheels as a pair and only up to a certain percentage, the SH-AWD system is set up to mimic the power transfer (and thus, the road feel/handing) of a RWD vehicle when you’re really hammering it. This is done by routing most of the available power to the rear wheels under WOT. But that’s not all she does, cap’n. The SH-AWD system keeps the MDX tracking true in the corners by modulating the power delivery to individual wheels, applying braking pressure (and then, power) as necessary to limit if not eliminate any sliding tendencies or loss of stability.

Equipped with SH-AWD, it almost impossible to ditch the MDX. In the snow, in the wet – or on dry pavement. 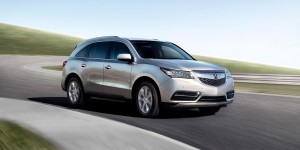 In a sea of relative sameness, the MDX breaks right and barrel rolls like an F-18 that got tired of herding a group of C-130s. It is one of the few large crossovers that wants to play – and encourages you to join in. I’ve already expounded on the virtues of the SH-AWD system. To get something comparable, you’d need to go with something laid out RWD, like the BMW X5. But the move-bustin’ BMW has only two rows of seats and it starts at $53,725 – and when ordered with a few bells and whistles (like AWD) the price approaches (and can easily exceed) $60k. That puts it in another orbit.

Depress the little button on the steering wheel and a form of early automotive sentience is aroused. Sensors mounted in the front of the vehicle “see” the painted lines on the road ahead and use these as reference points to keep the MDX in its lane – even in the curves – via computer-controlled steering. You feel the wheel cant left or right, making course corrections on its own. To be clear, it’s intended to provide assist – not to take over – and Acura is emphatic about not taking your hands off the wheel. But the fact that you can – and the car will steer itself – is a temptation many will not be able to resist. 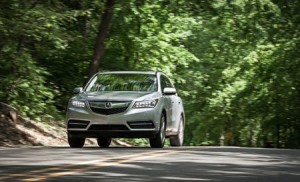 Now the system is not foolproof – so do not be a fool. It sometimes fails to read the painted lines (if they are faded – or simply not there) and it cannot self-steer beyond a certain point – as in a less than very mild curve. So resist the temptation to take your hands off the wheel – even to show off to your friends. And if you do, the car will ding (and flash) warnings when manual steering input (that’s you) is needed.

The reduction in unsprung mass – and the much higher power-to-weight ratio – makes the new MDX feel a lot more sprightly, in the corners and coming out of them. The MDX has always been among the best handling, most responsive vehicles of its type – and now it’s noticeably better. It pulls harder – and it’s not as necessary to put the pedal all the way down to access that pull.

Acura deserves kudos for maintaining these attributes without downsizing the MDX. 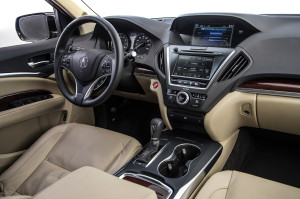 Nothing in the MDX’s price ballpark that also handles also comes standard with – or even offers – seven passenger seating. It is the MDX’s second trump card. (The first being its innovative – and uniquely capable – SH-AWD system.)

The BMW X5 is a fun-driver, but it only seats five. Ditto the hot roddy Infinit QX70 and the snarky Caddy SRX. The Lexus RX is also a two-row-only ride.

You could move up to something bigger – a Buick Enclave, for instance. It can handle more people (up to eight). But it doesn’t handle. It wasn’t designed to. It’s a boozy down-the-road cruiser, a kid-carter and family trip mobile. As pretty much all three-row crossovers are … except for the MDX. 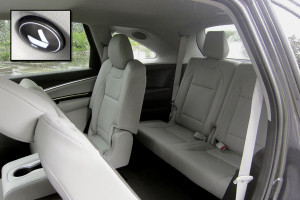 Weirdly – and unfortunately – there is no appreciable increase in interior real estate (or cargo capacity). In fact, there is a bit less room overall. Second-row legroom now stands at 36.6 inches vs. 38.7 previously. Since cargo space behind the third row remains about the same (15.8 cubic feet for the ’14 vs. 15 even for the ’13) the lost space has probably been given over to the third row, to make it more viable for other than tweens. It’s still a tight fit, though – and a tight squeeze.

Getting in – and back out – requires some limberness. If you lack it, forget it. The third row is kind of like the “break glass in case of emergency” fire extinguishers. It’s there if you really need it – but you hope you never need to use it.

If you do need a third row that can comfortably handle adult humans, you will probably have to give up handling to get it – and go get yourself something along the lines of the Enclave.

On the upside, the second row slides both ways (almost six inches of travel) allowing you to configure the cabin in such a way as to maximize the space for the occupants you’re carrying. 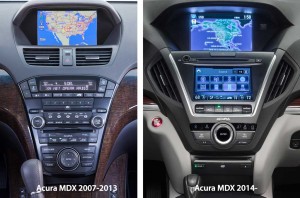 My chief gripe with the MDX – current and former – is the less-than-user-friendly layout of the secondary controls. Many “inputs” require first scrolling through (or digging through) various layers of tap and click first. There are now two smaller flat screens instead of the former one – but the workings can still be intimidating and more than a little bit frustrating. Haptic (tactile feedback) buttons help, but I still frequently found myself having to take my attention off the road and direct it to the center stack to try to keep track of what I was trying to do.

To be fair to the MDX, this is a pretty common problem – because of the exponentially increasing array of features being offered by higher-end cars. There is only so much space on the dashboard/center stack – hence the adoption of mutli-function buttons (and scroll-through menus) in lieu of individual control buttons and switches. 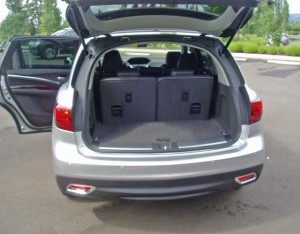 The fulsome scurvy truth is we are within sight now of the autonomous, self-driving car. It is just over the horizon. Soon, cars will drive themselves – and then we’ll be free to play with all the toys all the time.

Button happiness aside, if you’re looking for a crossover that handles – and can handle more than five – the MDX has to be on your short list.