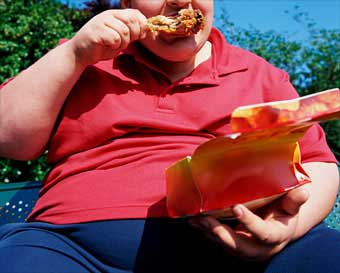 Ah, the people of Wal-Mart. 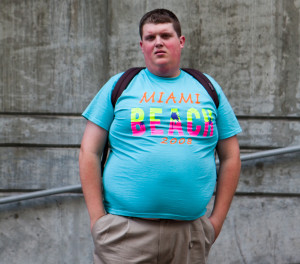 According to an article in the peer-reviewed journal, Pediatrics, about one out of every six children ages 1 to 6 is too beefy to fit into a standard-sized child safety seat – and needs oversized models designed to accommodate proto-Elvii.

One of the study’s authors, Lara Trifiletti, decided to look into the matter after she discovered researchers evaluating the functionality of child safety seats were encountering problems finding seats to fit/properly restrain “husky” children.

This isn’t baby fat wer’e talking here. These are three-year-olds who weigh in at 40 plus. Kiddies on a fast food track to being 200 pounders by their tweens.

Those gummi bears and juice boxes really add up, apparently.

Instead, the call is for accommodation, for super-sized car safety seats – units titanic enough to hold Baby Fatima so that she’s not injured in the event of a car wreck. That she’ll end up a teen diabetic – or in the cardiac care ICU by 40 – doesn’t matter much, I guess.

It’s much easier to build a bigger seat than put not-so-junior on a diet.

These weighty waddler toddlers need wide-load seats such as the $250 Britax “Husky” (no, really) like Elvis needed another 3,000 calorie serving of Fool’s Loaf Gold (See here, “The Sandwich That Killed Elvis”).

The “Husky” seat is designed to handle kids who weigh up to 80 pounds. Remember, this is for 3-5 year-olds. Hopefully, the parents of these kids are going to the gym – because they’ll need Popeye-sized biceps to heft their little giants onboard the family SUV.

Maybe the automakers will develop a special auto-winch system? 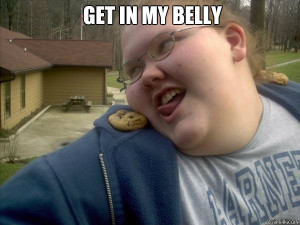 Britax spokeswoman Joyce Kara told the Associate Press that the childhood obesity epidemic is “. . . something that we do keep in mind when designing our seats to make sure our seats are versatile in accommodating all sizes of children.”

They might be better served if someone sent them a membership to the YMCA.

Meanwhile, the National Highway Traffic Safety Administration (NHTSA) is looking into new regulations which would apply to these super-sized child seats. They’ll be using a crash test dummy carrying an extra 25 pounds to simulate an 80 pound youngster.

No word as to whether the shock absorbers on the cars involved will also be tested to see whether they can handle the load.

The part that slays me is that, on the one hand, our society is mawkishly fixated on safety uber alles as far as outside risks go – helmets for kids on Big Wheels, seatbelts everywhere and forget about lawn darts – yet more indifferent than a chain-smoking, gin-and-tonic-swilling Mad Men ’60s-era mom to the arguably greater threat posed by man-titty’d ten-year-old boys and young girls on their way to becoming the next stand-in for “Precious” by the time they’re 14. 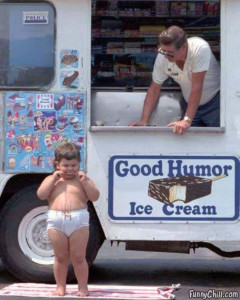 You’d think that parents would take notice of their child’s expanding girth (and their inability to find a child seat that fits) as evidence of a problem with the child – not a reason to go buy a supersized car seat.

Childhood obesity was pretty rare 25 years ago, in the pre-Playstation age. Nowadays, fat kids – really fat kids – are everywhere. Is it likely our genetic make-up mutated in this short span of time? Or could it be we’re just eating too damn much – and too much of the wrong stuff?

I recently got through reading Wheatbelly, an excellent book by Dr. William Davis (see here). His thesis is that it’s not so much that people have become more sedentary, it’s that they are being turned into mutants by their diet. And not so much the quantity, but the stuff itself. Stuff that spikes our blood sugar, which triggers a fat deposition process and metabolic mayhem within us, the external manifestation of which is grotesque fatness.

I strongly recommend this book.

Also, maybe sign Baby Huey up for Little league instead of buying him another Pixar mind-rotter and handing him a quart-sized jug of high fructose corn syrup and colored water.

We’re not doing these kids (or ourselves) any favors by accommodating their wide-load waistbands. But it’s probably easier for often also-beefy parents to look upon their progeny as smaller scale (for the moment) versions of themselves and thus, perfectly ok. 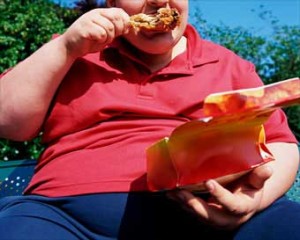 If current trends continue, looking like the Michelin Man will be the new normal – and the handful of skinny kids who somehow fall through the cracks will just have to make do with flopping around in super-sized seats.

How They Used to Make ‘Em