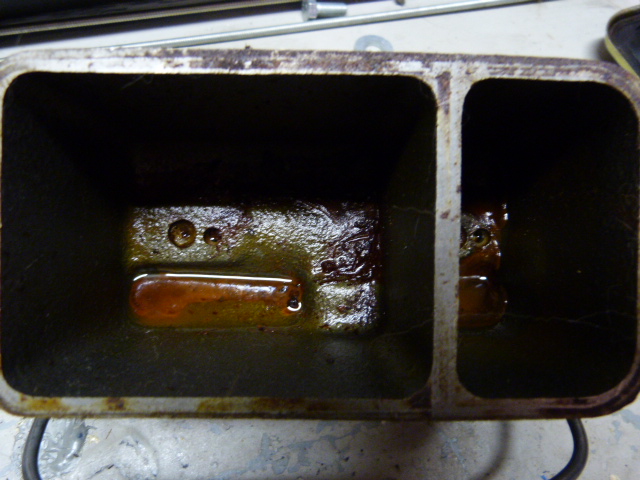 There is a reason why Jay Leno has a crew of guys to take care of his fleet of classic cars – and yeah, it’s because he can afford to pay them. 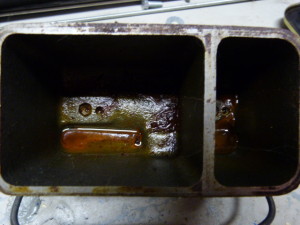 But the reason he needs to pay them is that there’s no way he could take care of the fleet himself. This problem – on a smaller-scale – is a problem many old car people have. There’s only one you – but you’ve got several old cars. Plus your “everyday” cars. Plus – probably – a job. Plus – usually – a family. Even if your life is cars, there’s only so much time in the day – and it’s easy to lose track, forget.

This happened to me again recently.

After doing an article about changing out the differential lube in my antique Pontiac Trans-Am (see here) I got to thinking about other maintenance items.

Several years ago (it turned out to be 12 years ago; even though I was sure it wasn’t more than eight at the outside) I rebuilt the entire system. Master cylinder to wheel cylinders. New stainless steel hard lines. Calipers, rotors, drums, springs and small parts – the works. Now, I knew the pads (and shoes) were ok because I don’t put more than a couple hundred miles a year on the Trans-Am and pads are usually good for at least 20,000 miles (that’s if you run the car hard; if not, 30,000-plus) and the rear shoes (which do less work stopping the car) ought to be good for – well, forever given how little I drive the car.

When I rebuilt the system, I filled it up with DOT 5 fluid – silicone. The stuff has a number of advantages, including a higher boiling point and (unlike standard brake fluid) it will not eat paint if you spill some. An important consideration with a classic car. Note: DOT 5 and other brake fluids do not – and should never be – mixed. If you want to use DOT 5, you must thoroughly purge the entire system of all the old fluid, which is virtually impossible to do without complete disassembly/rebuilding as residual (old, not silicone) fluid will still linger within the calipers, lines, wheel cylinders and so on.

Anyhow, that’s not primarily what I wanted to tell you about. What I want to tell you about is that even DOT 5 in a literally “all new” and – you’d think – hermetically sealed from the outside world system – will eventually turn to something ugly after a period of years.

When I popped the master cylinder reservoir to have a look – expecting to see relatively clean fluid and expecting to have to do nothing more than a thorough bleed/re-fill of the system with fresh fluid – I got a nasty surprise. The fluid – formerly translucent – now looked like Potomac River water. Muddy brown. And there was “mud” at the bottom of the master cylinder fluid reservoir, too. Goopy gunk – probably a mix of rust that formed as moisture (inevitable) accelerated the chemical deterioration of the cast iron walls of the reservoir. Even though the system was closed to the outside world, there was still some air gap between the fluid level and the lid (as in all brake systems) and moisture could precipitate out as a result of normal heat cycling. Give it 12 years … and, viola. 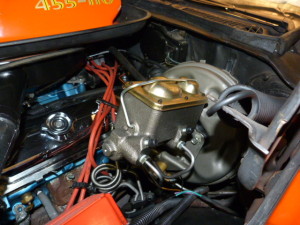 So, instead of bleeding the system and replacing the old fluid with fresh fluid, I had to remove/replace the master cylinder, purge the lines and then refill the works with fresh fluid. A small job became a bigger job. A more expensive one, too. All because of losing track – and letting things slide.

Had I changed out the fluid once every three years, probably I would have not had a problem.

It is really important to periodically bleed/replace brake fluid – especially if the car is a cloistered classic that mostly just sits. You’d think just sitting – under cover, in a nice warm garage – would be an easier life than daily driver duty, but it some ways it’s not. The daily driver – being a daily driver – gets more attention paid to it. Since you depend on it, you’re likely to be more on top of maintenance. It occurs to you that, hey, I haven’t changed the oil in a while – but I’ve put another 8,000 miles on it since last year. Better get to it.

The classic car? It’s hardly been driven at all since last year – so everything must be squared away. Right? 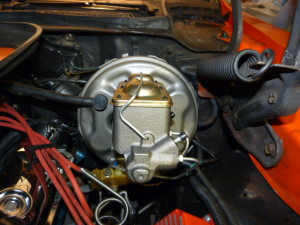 Jay has his crew to take care of things. I can’t afford a crew. But I can afford a notebook.  A little spiral thing I keep in the glovebox now. In it I record everything done – and when it was done. Now all I have to do is read through the thing once a year – and remind myself what needs doing, or soon will.

It’s almost as effective as Jay’s crew of guys – and whole lot cheaper!