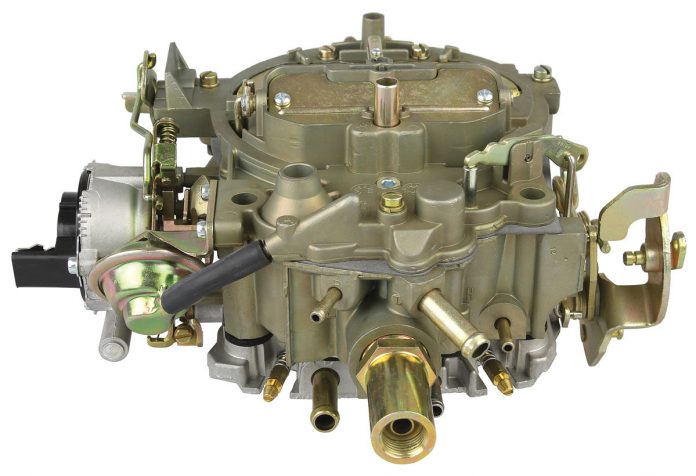 Being able to fix rather than replace things is probably going to become of greater interest in the years – perhaps weeks – ahead.

One such fixable rather than tossable thing is the now-venerable carburetor, a fuel-delivery device as unknown to most people under 30 today as being able to get on an airplane without being felt up – or a cup of coffee without having to play Sickness Kabuki.

Carburetors mix and distribute fuel mechanically rather than electronically and this accounts for their being fixable rather than tossable.

The device consists of two or three main castings, usually made of aluminum or some other light alloy. These are held together with screws, gaskets sandwiched in between, to keep them from leaking. Inside are a few small parts that regulate the flow of fuel in – and out – of the carburetor, such as the needle and seat and float, as well as some small springs and rubber things that fatigue or otherwise wear out over time.

These small parts do need to be replaced every so often but the carburetor itself soldiers on  . . . for decades. 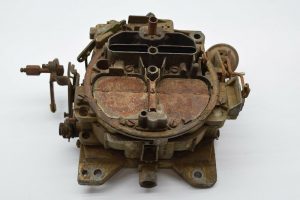 It’s not a pretty thing to look at unless you understand its beauty.

The carburetor, I mean.

It is a self-contained, completely mechanical device that constitutes the entirety of the “fuel system.” It does literally everything except pump the fuel to itself, which is handled – in cars with carbs – via a simple mechanical pump that is powered by the running engine rather than electricity and which is both cheap – usually less than $50 – and easily accessible, being bolted to the side of the engine, where you can get your hands on it. 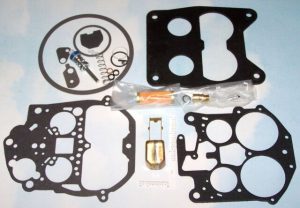 The carburetor has no wires because it is not connected to anything electronic. It “senses” only two things: The pressure of your right foot, via a cable attached to the accelerator pedal – and the pull of the engine’s vacuum, which serves to suck the air and fuel mix into the engine.

Physical things, in other words.

It is generally eld to the engine by four bolts. Remove these, disconnect the fuel line and the cable connecting the throttle arm to the accelerator pedal and the carb comes off the engine. It is a ten minute job at the most, if you work slowly. It is also a job anyone with a few very basic hand tools can perform just as well as a trained mechanic because it doesn’t require being a trained mechanic to perform it.

Bring the carburetor over to your work bench. Behold! You are looking at everything – the works. If you fix this, there is nothing else to fix. 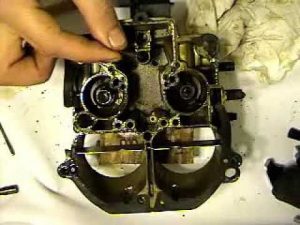 Taking it apart and putting it back together again – the rebuilding – does take a little more skill and a few specialized tools. But it doesn’t require hugely expensive diagnostic equipment or the specialized training of a professional “technician.” Chiefly because everything that needs attention can be seen and handled – being mechanical and physical – rather than electronic and invisible.

The thing can be carefully disassembled on the bench, inspected and cleaned. If you are capable of taking measurements and have the simple tools needed, you can handle taking all the measurements necessary to rebuild a carburetor. The cleaning is something anyone who has an old toothbrush and solvent can do. 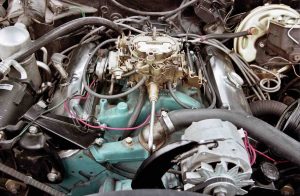 Rebuild kits are available for most popular carburetors, such as this Quadrajet four barrel. The kit will generally contain the small parts that need to be replaced once every 20 years or so. These include the needle and seat, which – along with the float – regulate the entry of fuel into the carb and how much fuel flows through it. Another little item is the accelerator pump, which is what spritzes the gas into the engine when you first push down on the accelerator pedal (after that, negative air pressure – vacuum – sucks the fuel into the engine).

That plus gaskets and careful re-assembly and a few adjustments constitutes the entirety of the rebuilding process and once done the entirety of the fuel delivery system is as functionally new as the day it was first installed on the engine, all those decades ago.

This 1978 Quadrajet is ready for another 42 years of fuel mixing. The Quadrajet mounted on my ’76 Trans-Am has been mixing fuel for 44 years and – absent some intervening political ugliness – it will be mixing it for more decades to come than I probably have left.

Electronic fuel injection has many merits – but rebuildability is not among them. When electronic components stop working, they don’t ever work again. You throw them away and replace them – with new parts. But these new parts – and there are many parts in an EFI system – may not be available in the years – or weeks – to come.

How about the decades to come?

And you may not have the funds to replace all those sensors – and the computer that runs it all. Which you can’t rebuild for $75 on your bench after a little scrubbing with a toothbrush and some solvent.