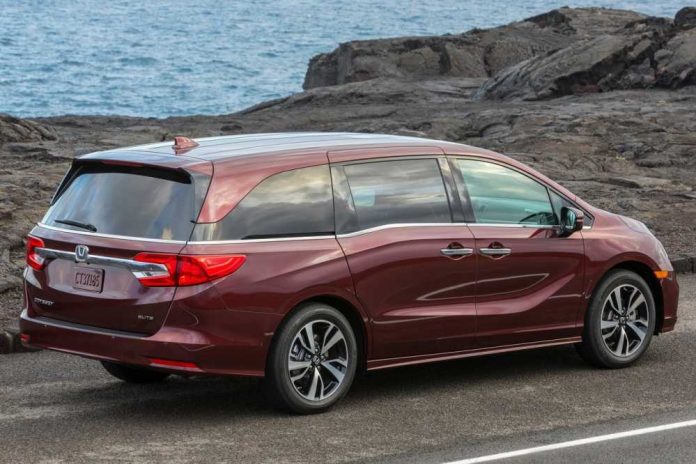 It’s ironic that two of the things that make for a family-friendlier vehicle have been disappearing from the market: Sliding – rather than swing-open – doors. And three usable rows of seats – which can be made even more usable by making some of them disappear whenever you need them to.

That vehicle being the minivan – which GM, Ford, Nissan, VW – even Dodge – have stopped making. Chiefly because people are buying what amounts to minivans without the sliding doors or the usable (and stowable) third row. 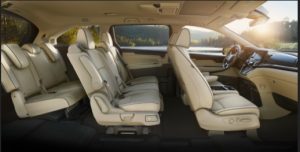 Those vehicles being crossover SUVs – which do their best to be as utilitarian as minivans without looking like minivans.

The problem being they aren’t as utilitarian as minivans – for just that reason.

If you prefer function over form, you’ll be glad to know a few are still available, including the just-updated Honda Odyssey.

The Odyssey is a traditional minivan, a type of vehicle currently produced by a diminishing number of car companies, including Honda, Toyota (Sienna), Kia (Sedona) and – for who-knows-how-much-longer – Chrysler (Voyager). Who-knows-how-much longer because Chrysler itself is down to just two models, the Voyager and the 300 sedan. 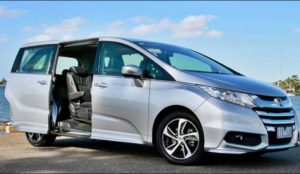 Like the other vans in this class, the Odyssey offers 7-8 passenger seating capacity, depending on the configuration, with unsurpassed access to those rows, the step in height of a car (unlike big SUVs with comparable seating capacity) and the ability to easily transform most of its cargo area into a flat space by disappearing the third row into the floor.

Large SUVs can’t offer this feature because their third rows can’t be folded flat, due to the rear axle that’s under the floor.

Base price is $31,790 for the family-cruiser-intended LX trim. A top-of-the line Elite with a rear seat DVD entertainment system, heated steering wheel and a built in vacuum cleaner  – a handy feature other vans don’t offer – stickers for $47,820.

Nothing beats dual sliding doors for getting people and stuff in – and out.

Standard V6 in all trims.

Minivans don’t sell well anymore, which makes them harder to re-sell when the time comes.

It’s not so “mini.” The Odyssey has a slightly larger overall footprint than a full-sized SUV like the Chevy Tahoe.

The Odyssey hasn’t yet become a victim of engine downsizing.

It still comes standard with a large (3.5 liter) V6 that makes 280 horsepower without a turbo – because it doesn’t need one.

This fact will possibly make it more appealing to buyers vs. the just-redesigned Toyota Sienna, which no longer offers a V6 at all. The 2021 comes only with a hybrid/four cylinder setup which will advertise slightly better fuel economy but may actually use more fuel on the highway, where the hybrid drivetrain will probably have to work harder to maintain the pace. It could cost more down the road, too – due to the doubled number of parts and the much-increased complexity of the system as well as the hybrid battery that will eventually have to be replaced when it loses its capacity to retain charge. 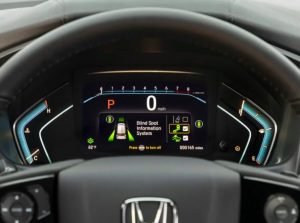 A ten speed automatic is paired with the Odyssey’s V6, which helps it (via multiple overdrive gearing) to deliver 19 MPG in city driving and 28 on the highway. That’s significantly better than the 15 city/21 highway delivered by a full-sized SUV like the Chevy Tahoe.

On the downside, the Odyssey can only pull 3,500 lbs. (vs. 8,600 lbs. for the Tahoe) and it’s front-drive only (no AWD) option – a feature that’s available with the Toyota Sienna – so it’s not much of a trailer-puller or snow-day hauler. 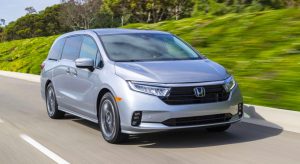 It doesn’t look fast – but that doesn’t mean it’s slow.

In fact, the Odyssey is speedier than some sports cars half its size. It can hustle to 60 MPH in a little over six seconds – which to put the matter in context is speedier than Corvettes were when the first minivans appeared back in the early ’80s.

It’s also speedier than the other vans in the class, including its most on-paper-equivalent rival, the Kia Sedona  – which also comes standard with a strong (276 horsepower) V6 (3.3 liters) but needs almost a full second longer to get to 60. This probably has to do with gearing more than weight – because the Kia is only about 70 pounds heavier overall (4,411 lbs. vs. 4,354 lbs. for the Honda).

The Kia has an eight speed automatic with two overdrive gears vs. three in the Honda’s box – which in addition to helping with mileage (the Kia’s is not a little bit lower, 18 city, 24 highway) also helps get two tons-plus of family bus moving speedily since the lower gears are more tightly spaced. 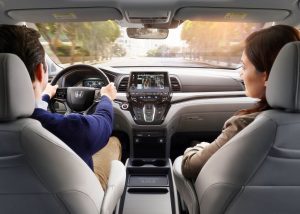 Either that or Honda has fudged the horsepower actually produced by its V6 – or Kia has overstated its number.

Regardless, it can move – which makes it fun as well as family-friendly. No one expects a minivan to be speedy. Especially the drivers of sporty cars, who assume they can snark right by at will. You will also be invisible to cops. Or at least, less visible. Your radar signature will be larger, of course – but the odds of being picked out of a pack for the piece of payin’ paper are smaller and your odds of getting just a warning are probably higher.

Cops feel sorry for minivan drivers. An emotion rarely summoned by the sight of drivers of sporty cars who’ve flouted the speed limit.

It is also supremely comfortable – for eight people. Minivans have become RV alternatives as much as kid-conveyors. Few vehicles are better suited to cross-country driving – without putting on a ‘hurting – than a new minivan. 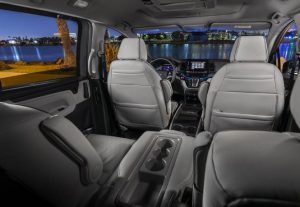 And while it’s big, it’s also low. Unlike SUVs, in which you sit up high. And climb over as well as up to get into the seats. Not everyone wants that – and the only way to avoid that while still having the ability to carry eight without contortions is by getting something like this.

One thing you also get – mentioned earlier – is the array of driver “assistance” tech, which is no longer optional. Which is unfortunate – if you don’t need the “assistance.” These systems are being hard-sold to the public via use of adjectives such as “advanced” – but they’re frankly retarded in that that they cannot – among other failings – discern the difference between an intended lane change and a wandering into the other lane change. If you fail to signal a turn, even though no other car is near, the Lane Departure Mitigation will try to steer you back into your lane.

Similarly, the Forward Collision Mitigation – Honda’s term for automated emergency braking – will sometimes brake when there is no emergency, as when a car up ahead is stopped but obviously (to you, the driver) in the process of exiting the road, but the “advanced” assistance system doesn’t have the refinement to discern this and jams on the brakes regardless.

These systems can be turned off – which is good. But it’d be better if Honda let buyers decide whether they want the “assist” in the first place. Here, the Kia Sedona has the advantage, if you’d rather drive without “assistance.” These features are available in the Sedona – but they are still happily optional. 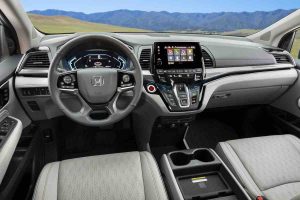 The Odyssey  tries harder to not look like a minivan than the others in the class. It almost looks like a kind of super-sized Accord – outside and inside. Which is to say, it looks pretty nice, especially in view of the parameters.

You can only do so much with the shape without impinging on the form. Honda did a credible job of pushing the styling envelope about as far as is it could be pushed.

A word on words.

The original minivans were just that.

Not much larger than a family car of the era – being based on family cars of the era like the K-car, which served as the foundation of the first mass-market minivans from Dodge and Plymouth (RIP).

The Odyssey is larger – overall – than a current full-size SUV like the Chevy Tahoe, which is only 204 inches long vs. 205.2 inches for the Odyssey. 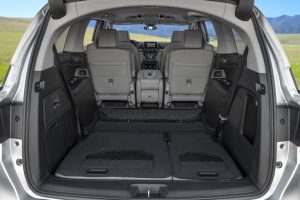 But it can do things the full-size SUV can’t – such as disappear its third row entirely into the floor -and nothing competes with sliding door access to all three rows.

Except, of course, another minivan.

Here, again, the Kia Sedona has a little bit of an edge – because it is not quite as large overall. At 201.4 inches end to end, it’s smaller overall than the Tahoe, too. But the price you pay for that is what you’d expect:

The Odyssey has the most room inside in the class – 155.7 cubic feet vs. 142 for the smaller-on-the-outside Sedona, 140.5 for the Chrysler  Voyager  and 150 cubic feet for the 2020 Sienna (2021 specs weren’t available when this review was written and it is possible the hybrid 2021 Sienna will have less cargo capacity than the outgoing model because of the room which the hybrid battery/motor system will necessarily consume). 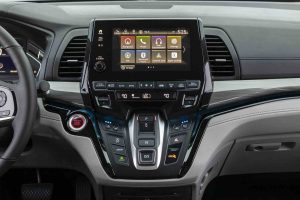 The Honda is arguably the nicest van in the class – and this is reflected by its price, which is higher to start than the Sedona’s as well as the Voyager’s. But you get what you pay, including standard automatic climate control AC (vs. manual), high-output LED headlights and a very nice standard seven speaker stereo. 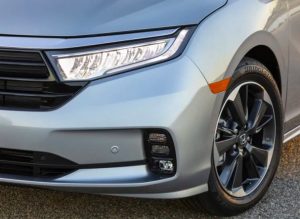 One thing you don’t get for your money – unless pay some more money – is AppleCarPlay and Android Auto, which don’t come standard in the base LX trim. You have to move up to the more expensive EX ($35,190 to start) to get them. The desirable power rear liftgate is also extra-cost, but you can outfit this rig with Winnebago-esque luxuries such as ambient interior mood lighting, a cabin intercom system and an 11 speaker premium audio system.

The others offer similar amenities, of course – but none of them can match the Odyssey’s performance. 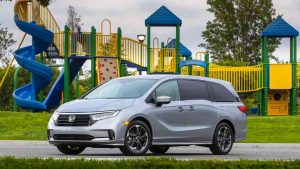 There is an upside to being not-so-popular. It is being in a better position to haggle. It is probable you’ll be able to buy a new Odyssey for less than what you’d end up paying for something otherwise comparable but more popular – and without the handiness of those sliding doors.

And those disappearing third row seats.

Minivans may not be exactly sexy – but they still have their attractions.