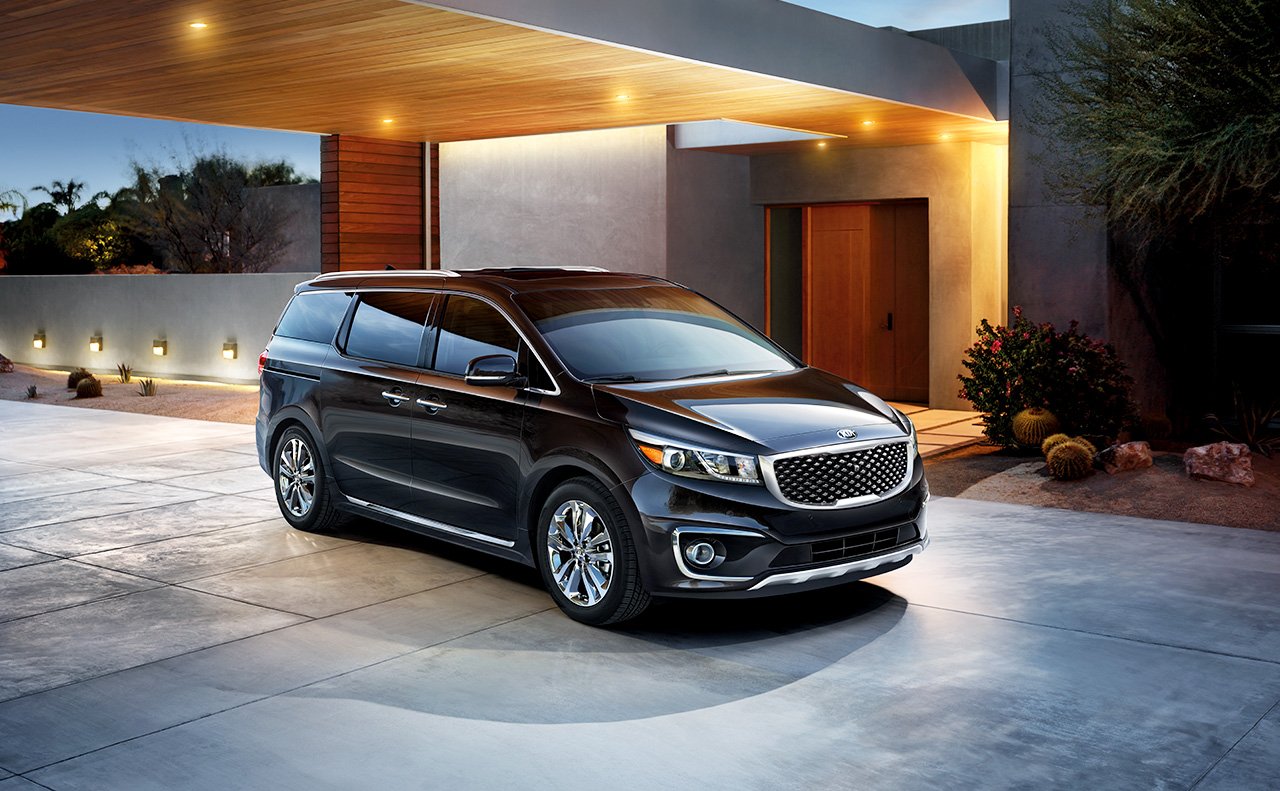 Minivans have become kind of like timeshares. Not many people seem to want to buy in. 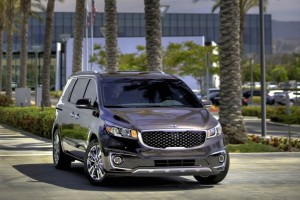 Part of the problem is image. Minivans are the automotive equivalent of middle-aged ED.

Or at least, likely to be associated with it.

A much bigger problem for minivans is the availability of crossovers – many of which have everything a traditional minivan has in the way of kid-carrying/stuff hauling functionality except the sliding doors. Along with other features – like all-wheel-drive – not generally available in traditional minivans (the Toyota Sienna is the only new van that still offers it). These alternatives to minivans have made it harder to sell traditional minivans.

Note that GM and Ford don’t even try to sell them anymore. They’ve crossed over to crossovers 100 percent.

But another problem, arguably, is price.

Most of the remaining minivans are pretty expensive. The Chrysler Town & Country, for instance, starts at just $5 under thirty-thousand bucks ($29,995). 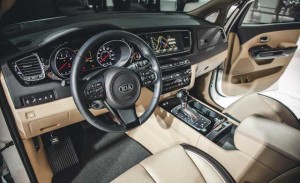 That’s before taxes and tags.

Its lower-rent sibling, the Dodge Caravan, is still affordable (base price $21,795). But it is a long way from being the smaller-scale luxury RV that the T&C is.

Then there’s the Kia Sedona.

It splits the difference.

Much nicer than the Motel 6-ish Caravan – but not nearly as expensive as the Town & Country (or the Sienna or the Honda Odyssey).

It’s also less minivan-y than they are.

And that is priceless.

The Sedona is a full-size minivan available in seven and eight-passenger configurations.

Like the models it targets – the Toyota Sienna, Honda Odyssey and the Chrysler Town & Country – the Sedona is as much about luxury and technology as it is about utility and practicality.

The Sedona is all-new, a wheels-up redesign. 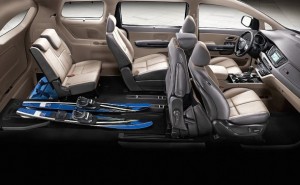 Family-friendliest price (and warranty coverage) of the bunch.

For “safety,” many of the vehicle’s settings and apps cannot be accessed unless the vehicle is stationary – which is a hassle when you’re not. 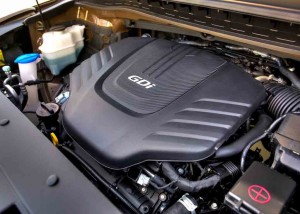 In a very real way, minivans do not deserve their Mom Mobile rep. It’s not what they’re capable of.

It’s stuffed in a minivan, sure. So it’s carting an extra 1,000 pounds or so, compared with the old TA.

The Kia’s in the mid-high sevens, which is speedy for a minivan and period. The fact is this minivan would give a ’73 SD-455 a run for the money, 0-60. The TA would win – but not by an embarrassing margin. 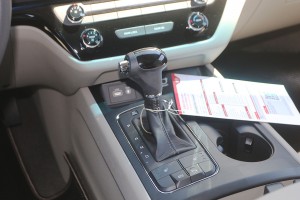 Which is kind of embarrassing… for the Trans-Am!

The downside – and this applies generally to the entire class of minivans – is that they drink fuel at nearly the same rate as an early ’70s V8 muscle car.

And the Kia is particularly thirsty.

The sporty-themed SX-L trim (which is the heaviest version) comes with a fairly appalling 17 city, 22 highway rating. The SX is a little better – 18/ 25. But that’s still low-20s/high teens, in average everyday driving.

In other words, about 5 MPG better than a V8 muscle car averaged. Without a four-barrel Holley sucking air. And with an overdrive transmission.

The exception is the Honda Odyssey, which somehow manages 19 city and 28 on the highway.

The Kia’s V6, like the others in this class, is paired only with an automatic (six-speed) and the only available drive configuration is front-wheel-drive. This includes Chrysler – which used to aggressively tout its AWD-available vans. 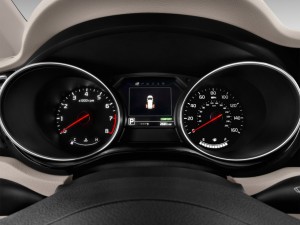 It’s not that AWD isn’t popular. Virtually every crossover SUV offers this feature. It’s that adding it really eats into the mileage (viz, the AWD Sienna’s hole-in-the-gas-tank 16 city rating).

People seem to be more tolerant of OPEC-friendly MPG numbers in crossovers – which are seen as rugged and sporty. Whereas minivans are supposed to be at least plausibly practical. But

Kia compensates for its hungrier-than-others engine by adding an extra gallon of tank capacity – 21.1 gallons vs. 20 for the Sienna and T&C. So you can go about the same distance in any of them.

You’ll just pay a little more to fill up the Kia.

The Odyssey also has a 21 gallon tank – and because its V6 drinks less fuel than the others, it can go farther on that tank than any of them: 588 miles on the highway vs. 506.4 for the Kia, 500 for the Toyota and the Chrysler.

When ordered with the optional hitch/trailering package, the Sedona can pull a respectable 3,500 lbs. – same as the Sienna and Odyssey, slightly less than the T&C (3,600 lbs.) 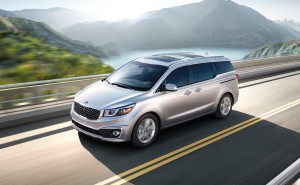 Kia worked hard on this thing to downplay the minivan meme. You notice this immediately when you observe the console-mounted gear shifter. The others all have their shifters mounted on the dash, toggle-style. It’s sensible and functional (frees up console space) but about as sporty as granny panties.

It’s a very different look, for a minivan.

The performance potential complements this. Nearly 300 hp will get almost anything going in hurry and the Kia will respond eagerly, if given the opportunity. Burnouts would be possible if the traction control didn’t step in to prevent it. Regardless, this minivan is fully capable of beating several sporty cars to the next red light, especially if you get the drop on their drivers.

Which is easy to do, because you’re in a minivan – and no one expects you to drop the hammer. 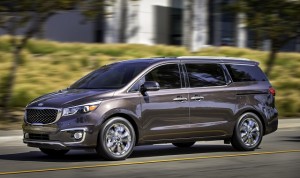 Kia has done good work here. The six-speed transmission shifts quickly, but not harshly; the engine seems to want to run… .

Which is why it’s such a shame that the typical minivan driver isn’t interested in that. Hence the minivan “rep” as a left lane hog and general traffic clogger, a fact made all the more frustrating to those caught behind one because they know it’s not the van’s fault.

A 19-inch wheel/tire package is available (17s are are as aggressive as it gets over at Chrysler; the Odyssey’s largest whees are 18s). The Sienna is the only other van that also offers such sporting enhancements and it’s a close race between the two, as far as hustling through the apexes. Which is actually a lot of fun in a seven-passenger bus that weighs about 4,400 pounds empty – but keep in mind that price disparity. 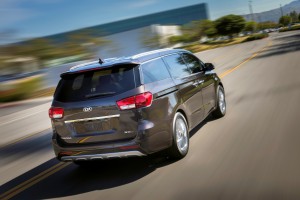 The Kia also looks more the part – or rather, less the part (of a minivan) and that adds an intangible. As a parallel, the Dodge Hellcat I got to test recently felt less fast than my old muscle car, despite the Hellcat having probably twice the power. Because my old muscle car was louder, had that air bag-free steering wheel, the sound of the big four-barrel sucking air through an open hood scoop.

The Kia does the same thing, minivan-wise. Toyota and Chrysler and Honda are still building minivans that look like minivans and so feel more like minivans, even when they’re comparably fun to drive (or could be, if you wanted to go that way).

Which brings me to… . 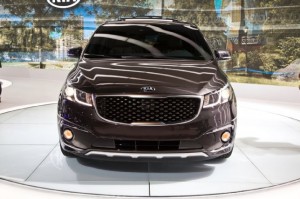 Building a minivan that doesn’t look like a minivan while still being a minivan in all the functional ways that matter to people who buy minivans is not unlike trying to make Rosie O’Donnell look good in a bikini.

Kia has pulled it off.

Coming at you, at least.

From that  angle, the Sedona looks a lot like the Optima – which is a good-looking sport sedan that Kia has sold a bunch of.  The other vans have front clips styled after their conservative family sedans, such as the last-generation Camry (Sienna), the pre-2015 Chrysler 200 (Town & Country) and the current generation Accord (Odyssey). 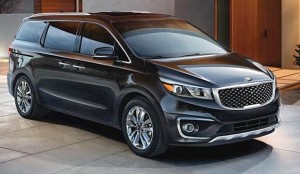 The Sedona’s Optima-inspired “bull-nose” front clip is much jauntier-looking than the Plain Jane faces of its rivals.

It looks sharp from the side too – via visual effects such as the appearance of a continuous sheet of tinted side glass extending from the windshield corners to the tail-lights.

Kia used a simple but very effective trick to do this. Instead of body-colored and upright B and C pillars, there’s are flush-mounted and rearward raked pieces of trim tinted exactly the same as the side glass. It makes it look as though the glass is a single unbroken panel from front to rear. 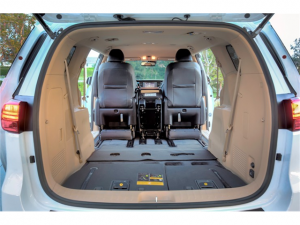 There is slightly less headroom up front (39.8 inches) than in more upright rivals like the Sienna (41 inches) but it’s a very small difference that most people are not likely to notice. But most people will probably notice the Kia’s significantly greater second-row legroom (40.6 inches, virtually the same as the driver and front seat passenger get) vs. the 36.5 inches in the T&C’s second row and 37.6 inches in the Sienna’s.

Only the Honda has more – 40.6 inches – which is what you’d expect from the master of maximizing interior space.

Still, the Kia is clearly better in that respect than two of its name-brand rivals – which both cost more, remember. 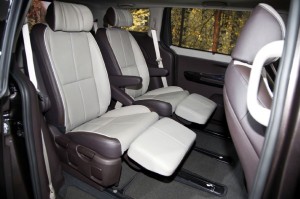 As noted up above, you can select either seven or eight-passenger seating, with the option to go with a set of really swanky “lounge” chairs that look (and feel) like what you’d find inside a corporate jet.  These slide and recline, which is not uncommon – but they also have fold-out leg rests (which isn’t common). Add the optional DVD entertainment system and you’ve got a mini-me RV for road-tripping adults. Or, stick with the standard chairs – which fold up forward against the driver and front seat passenger’s chairs – eliminating the need to physically remove them from the vehicle to make the most of the available interior volume.

Other neat Sedona features include outside rearview mirrors that tuck when you park and leave the vehicle and untuck automatically upon your return, an available refrigerated glovebox, rapid charge USB ports and Kia’s UVO/Bluetooth/wireless interface and apps. 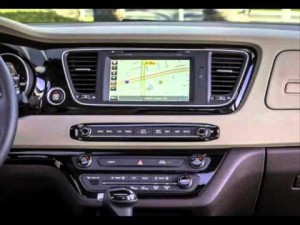 There is one area where the Kia is very much a minivan: Its Safety Nazi impediments to accessing/changing many of the electronically adjustable functions while the vehicle is moving – and the glacially slow open/close rate of the higher-trim model’s automatic sliding side doors and liftgate.

Here it is exactly like the Sienna and other traditional vans. God help you if you’re in any kind of hurry. Push the button and then – ever so slowly – the liftgate begins its crippled-up dance. You could eat a ham sandwich in the time it take the thing to open and close – and because it is attached to electric motors, the thing fights you if you try to hurry the action along by manually slam the thing closed or pull it open. 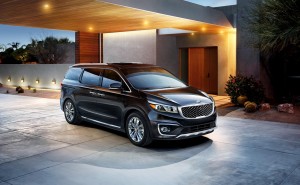 The non-gimpy (and in a hurry) will prefer the manual opening (non-electronic) sliders and liftgate. Unfortunately, they are to be found on the lower (L and LX) trims only – which puts you in a bind if you want stuff like the “lounge” chairs or the DVD entertainment rig or the sporty enhancements that come with the SX and SX-L.

It’s still a minivan, of course.