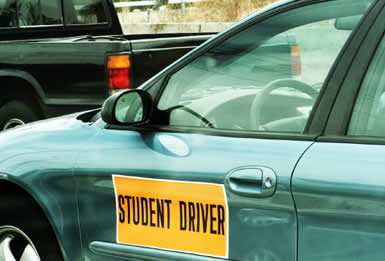 As a rule, poor drivers aren’t born. They are made. 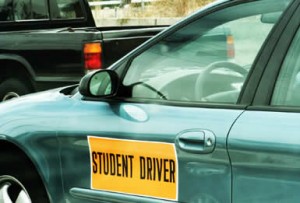 The other day, I came upon one such in process. She (as it happened) was obstructing five or six cars, all bunched up behind her. The speed limit was 55. She was doing between 40 and 45.

On the roof of her car, a placard read: XYZ Driving School (XYZ is made up, the rest is real).

A student driver being taught in the ways of Clover. To not move over. To pay no attention to the rearview mirror – or the inconvenience being caused her fellow motorists. To be oblivious – and entitled. No doubt her instructor was admonishing her that this constituted “safe” driving. And that all the cars bunched up behind her were “aggressive.”

For about eight long (and slow) miles, the ever-growing line of backed-up traffic followed the young Clover. She remained oblivious. Ignored numerous opportunities to pull off the road and into a parking lot – so that the by now dozens of people she was holding up could go about their business. This probably never occurred to her. She was tunnel-visioned on the road ahead and – for “safety” – being sure to never approach the posted speed limit. 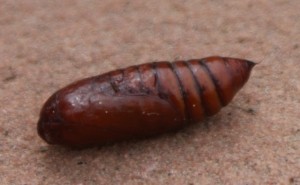 This pupating Clover will soon join the rest and traffic will get just that little bit worse.

Scale it up, ponder the effect of millions of such – and you will grok why things are such an enervating mess out there. Why throughput (how many cars can transit a given piece of road over a given period of time) continues to decline.

It literally takes just one Clover to clog an entire lane of traffic for miles behind him (or her). To make you miss a light you could have made because the driver three cars up took five seconds to notice the green – then another 15 to clear the intersection. By the time you get there, it’s red again.

To wait… and wait to merge with traffic from a sidestreet because the driver ahead of you requires 100 yards of clear space to the left and right before he’ll even make the attempt.

We’ve all experienced this.

But the experience has become more common because it is now policy to be a Clover.

Just as it is policy to be a busybody.

The other day, I happened to be watching an episode of the ancient ’70s TV show, Emergency. A busybody had phoned in about a kid left inside a parked car outside a store. The show’s stars – paramedics John Gage and Roy DeSoto arrived on scene. And did not break into the car. Did not arrest the woman – the kid’s mother – when she returned to the car five minutes later. They sheepishly apologized to her for the ruckus.

Similarly, the kind of “driving” that is now the rule rather than the exception was once upon a time considered socially unacceptable. There was, accordingly less of it. Because more was expected of people. New drivers were taught to use their mirrors. To yield. A new car’s passing gear performance was routinely touted and talked about.

Fast-forward 40 years to the era of the cruise-control pass.

If it is even attempted.

Mostly, not. Because up-and-coming drivers have been trained to regard over-caution as the sine qua non of “safe” driving.

To pay attention to their speed above all else; to be certain that it is always in conformity with the signage (which is there for “safety”) than take note of and react to the ever-changing environment around them.

There’s a reason, incidentally, why race cars don’t have speedometers.

To creep and crawl. 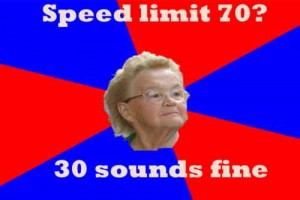 And to never, ever pull off or move over – even if you have a half-mile long conga line of cars stacked up behind you.

Such arthritic old lady-ism would was ridiculed within living memory of any person over the age of 40 today. I remember it distinctly.

Was it ever real?

Lawn darts (we learned to duck). Kids playing for hours unsupervised (we learned independence). Nobody wore seat belts except geeks. People made fun of Volvos.

I picture the future, a time when old people (future me) will be the ones who drive faster than people in their 20s and 30s – the latter having been thoroughly Cloverfied. Probably, none of us will be driving at all. The cars will do that for us.