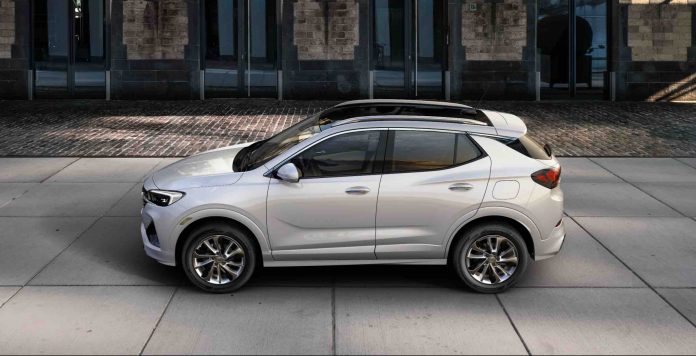 It’s an irony of history that Buick – once upon a time known for its Barcalounger big cars – now sells one of the smallest ones you can buy.

With one of the smallest engines on four wheels.

Many motorcycles have bigger engines.

But they haven’t got 50.2 cubic feet of cargo capacity – enough to take a motorcycle (if you take it apart) and the little Buick’s back seat, as it turns out, has almost exactly as much legroom as you’d find inside one of the biggest Buick’s ever, the 1970 Riviera.

Which was almost four feet longer overall than this Buick.

So, the size is still there. Just not outside.

Or under the hood.

The Encore GX is a small crossover SUV, in the same class as models like the Mazda CX3 and Honda HR-V. 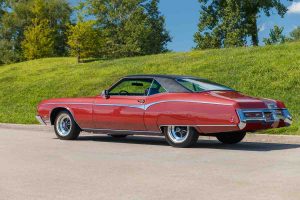 Two of them, actually.

You can upgrade from the standard 1.2 liter engine to a marginally larger 1.3 liter engine – but both of them still much smaller than the engines in rivals like the CX30 and HR-V.

But, what they lack in size they try to make up for in pressure. Both engines are turbocharged. But are they powerful enough – and efficient enough – to make up for their lack of displacement?

Prices start at $24,200 for the base Preferred trim with the 1.2 liter engine and front-wheel-drive. If you buy the available all-wheel-drive system, you get upgraded to the 1.3 liter engine, which is also optional by itself with the mid-trim Select ($25,800) and the top of the line Essence ($28,600) trim.

The Encore itself is largely the same as last year but all trims come standard with satellite radio and both Android Auto and AppleCarPlay connectivity this year. 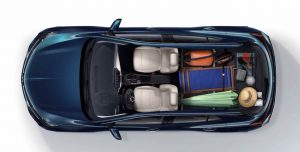 Lots of room – without the size.

Overpriced vs. rivals like the Mazda CX30 – which comes standard with a much stronger engine that doesn’t need a turbo.

Small engine uses about as much gas as larger engines in rivals – without the potential down-the-road cost of a replacement turbo.

Desirable features like the heated steering wheel, HUD and wireless sail fawn charger are extra-cost and only available with the top-of-the-line Essence trim.

Both of the Buick’s engines are so small they need a boost – literally. Turbocharging breathes four cylinder power (137 hp) into the standard 1.2 liter engine and 155 hp into the optional 1.3 liter engine.

Well, almost. Rivals like the CX30 come standard with fours that make more power – 2.5 liters and 186 hp. There’s also the slightly smaller overall Mazda CX3 (no 0). It comes standard with 2.0 liters and 148 hp. 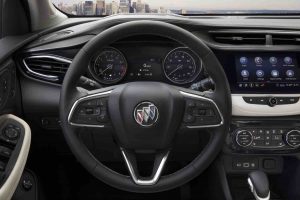 The transmission you get depends on which drive configuration you select. Encores equipped with the 1.2 liter engine automatically get a continuously variable (CVT) automatic and are front-wheel-drive only. The 1.3 liter engine is available with a nine-speed automatic, if you select all-wheel-drive – which is optional. If you stick with FWD, this engine gets paired with the CVT automatic.

Surprising, gas mileage with either engine is pretty mediocre given their smallness. The 1.2 liter engine in FWD configuration returns 28 city, 31 highway. With the slightly larger 1.3 liter engine and AWD, the number drops to 26 city, 29 highway.

A Honda HR-V comes standard with a 28 city, 34 highway rating.

So what is the upside, if any, of all this boost? 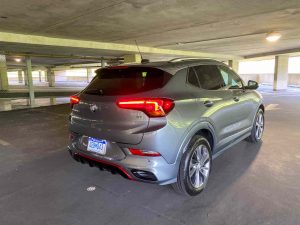 The main benefit of the Buick’s tiny turbo’d engines isn’t fuel efficiency. It’s ease of movement, the main benefit of turbocharging a gas engine. Which gives it the low RPM muscle of a diesel engine – just without the rattle and smoke.

Especially the Encore’s optional 1.3 liter engine, which makes its peak torque (174 ft. lbs.) at just 1,500 RPM, which is only slightly faster than the engine idles. Which means that just a little pressure on the accelerator gives immediate and substantial  . . . acceleration. The Mazda CX30’s engine is much stronger but not until it spins a lot faster – which means pushing harder on the accelerator to get things going quickly.

The CX30 will easily outrun the Buick, if you ask it to. The former can get to 60 in about 7.5 seconds; it takes the latter much longer. Over ten seconds with the 1.2 liter engine and just under that with the 1.3 liter engine. 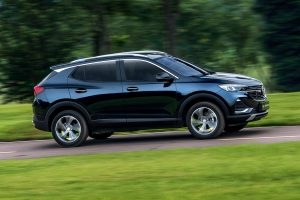 But the Buick’s much more relaxed demeanor just knocking around suits the heritage – which is weird given how small this thing is and given it’s nothing like Buicks are supposed to be like in terms of how it looks.

The Encore will never be confused with a road sofa like a ’70 Electra 225 with a 7.5 liter 455 V8 up front. But it has echoes of the classic Buick’s character. This includes its ride, which is noticeably softer than sportier-tuned models like the Mazda and generally. Practically everything – even minivans – is “tuned” to be “sporty” today – which is itself a weird thing, especially in a class of vehicle like this.

Expecting a small family-type vehicle to be “sporty” without impinging upon the things that make a vehicle family-friendly is almost like expecting a big truck to deliver the gas mileage of an economy car and be capable of pulling 10,000 lbs. Buick offers a quiet, nicely weighted ride. The seats are pretty soft, too. It makes for a small car that feels like a bigger car – which makes it a pretty pleasant car.

Will it take a curve as adroitly and with less tire squeal at high speed – at speeds well above legal speeds – as something like the Mazda? No, it won’t. But isn’t that for people who buy Mazdas? 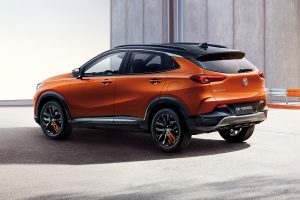 The Encore has pretty high doors and visibility toward the rear isn’t great – a failing that’s very common in crossovers as a class due to the nature of their shape. Most also have a pretty small and sloping rear window tucked in between thick “c” pillars and underneath a roof-mounted spoiler thing with the net result being a tunnel view of the rear through the rearview mirror.

A ’70 Riviera had a much more expansive view – even over that flight-deck of a hood.

On the upside, the Encore’s very tight packaging – there’s only about two feet of Encore from the base of the windshield to the front of the bumper – makes it very easy to Frogger the thing into tight parking spots. It also compensates somewhat for the take-your-time acceleration. Here, size does matter – if you want to make use of tight holes in traffic. 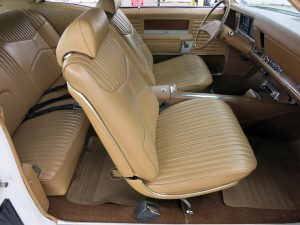 And it’s far from tight on the inside – the chief virtue of these small-on-the-outside crossovers.

The driver and front seat passenger enjoy 41.7 inches of legroom but the big stat is the 35 inches of backseat legroom. This is lots of room for a vehicle this small. It is almost exactly the same amount of room as inside that ’70 Riviera. It had a superabundance of cool – but less space than you’d think given how large it was on the outside.

The Encore has even more space behind its back seats – 17.8 cubic feet. This expands to 42.7 cubic feet when you lower the back seat. Which is almost three times as much room as the ’70 Riv had in its trunk, which was also low and wide but not tall – and so you couldn’t close it with tall things inside it.

While the exterior styling of this thing isn’t exactly Frank Sinatra, the inside look is more so. Echoes, again, of the calming fluidity and grace you used to find inside Buicks. A cut-above vibe and also relaxing by dint of not being over-the-top with technology. The gauges are analog, many of the major secondary controls are knob and button, none hard to reach or inscrutable. A small thing that’s a big thing in terms of everyday usefulness is the steering wheel-mounted thumbwheel for the radio volume. Other vehicles have this, too – but that doesn’t make it any less good that the Encore has it as well. 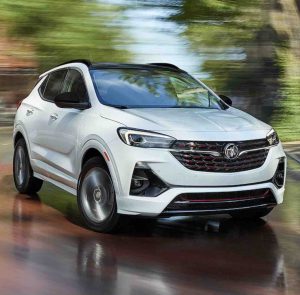 GM’s touchscreens are also better-than-average in terms of ease-of-use. A few large buttons rather than twice as many small ones. Plus, it’s not necessary to use them as much as most of them activate tertiary functions that you won’t need to access as often as things like the temperature control (controlled by a simple left-right knob) or the audio system (in addition to volume, you can change stations using another steering wheel-mounted thumbwheel).

Final pat  on the head – for the forward-mounted and visible USB and 12v power points, just ahead of the gear selector. Here Buick is among the few that don’t hide the USB ports inside the center console storage area.

Many new cars – of all kinds – no longer include a 12V power point at all. 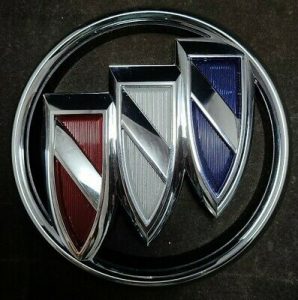 Buick charges significantly more for the Encore than rivals like Mazda charge for their equivalent offerings because Buick is a higher-zoot brand.

But do you get a higher-zoot vehicle?

The standard/optional equipment that comes in – or can be had – in the Buick is similar to what comes standard – and is available in – rivals like Mazda and Honda, for significantly less money.

If the Buick’s turbo’d engines gave it a significant mileage – or power – advantage over its bigger engined/lower-cost rivals, the price difference would make more sense.

To be fair to Buick, the Encore does offer the whole megillah of “advanced” driver saaaaaaaaaaaaaaaaaaaaaaaaaafety “assistance” technology, including automated emergency braking (for when you’re sleeping) and jerk-the-wheel steering (for when your car’s tire touches a painted line or you try to pass or turn off the road without signaling, which cancels the “assist”). 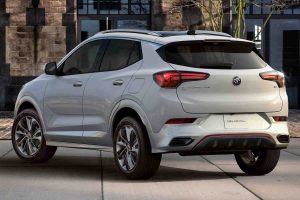 But if you don’t want these “assists” it’s a non issue – and you can spend the thousands you saved on things like a sunroof or a better stereo.

Or a bigger, stronger engine.