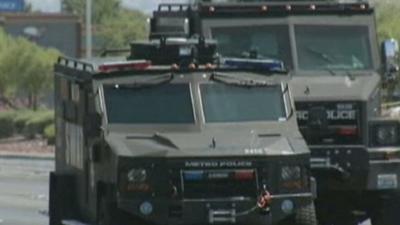 LAS VEGAS (AP) — Two police officers were “simply having lunch” at a strip mall pizza buffet in Las Vegas when a man and a woman fatally shot them in point-blank ambush, then fled to a nearby Walmart where they killed a third person and then themselves in an apparent suicide pact, authorities said.

The attack at a CiCi’s Pizza restaurant Sunday killed Officers Alyn Beck, 41, and Igor Soldo, 31, who are both husbands and fathers. One of the shooters yelled, “This is a revolution,” but a motive remains under investigation, Las Vegas police spokesman Larry Hadfield told The Associated Press.

For added safety, officers who normally work alone will be paired up with another officer for a time, Gillespie said.

The deadly rampage in the aging shopping center about five miles northeast of the Las Vegas Strip took place in a matter of minutes. Police were called at 11:22 a.m. to the pizzeria, where one of the officers was able to fire back at his assailants. It’s unclear whether he hit them, Gillespie said.

Shots were reported five minutes later at a nearby Wal-Mart, where the shooters gunned down a person just inside the front door and exchanged gunfire with police before killing themselves, police said.

The female suspect shot the male suspect before killing herself, Gillespie said. The victim’s identity hasn’t been confirmed, and the suspects’ names haven’t been released. 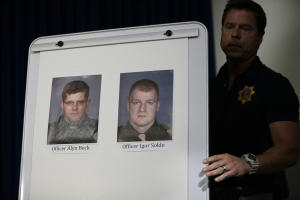 He was described as a good father and a “great guy” by his sister-in-law, Colleen Soldo of Beatrice, Nebraska. She said he attended high school in Lincoln, Nebraska, and previously worked as a corrections officer.

Sheree Burns, 48, told the Las Vegas Sun she was eating at the restaurant, seated just behind the two officers.

A man came up to one of the officers and shot him in the head, Burns said. She said she ducked under her table but peeked up and saw the other officer being shot.

She said the man took an officer’s handgun and the two attackers fled.

Pauline Pacheco was shopping at Wal-Mart when she saw the armed man and grabbed her father to escape, KLAS-TV reported.

“We saw when the man was walking, he was shouting, yelling bad words, and suddenly he had a gun,” she told the station. “It was terrible, it was terrible. That man was crazy.”

Assistant Sheriff Kevin McMahill said the male suspect yelled “everyone get out” before shooting at Wal-Mart. The suspects then walked to the back of the store.

Gov. Brian Sandoval said in a statement he was devastated by the murders of the two officers and an innocent bystander in an “act of senseless violence.”