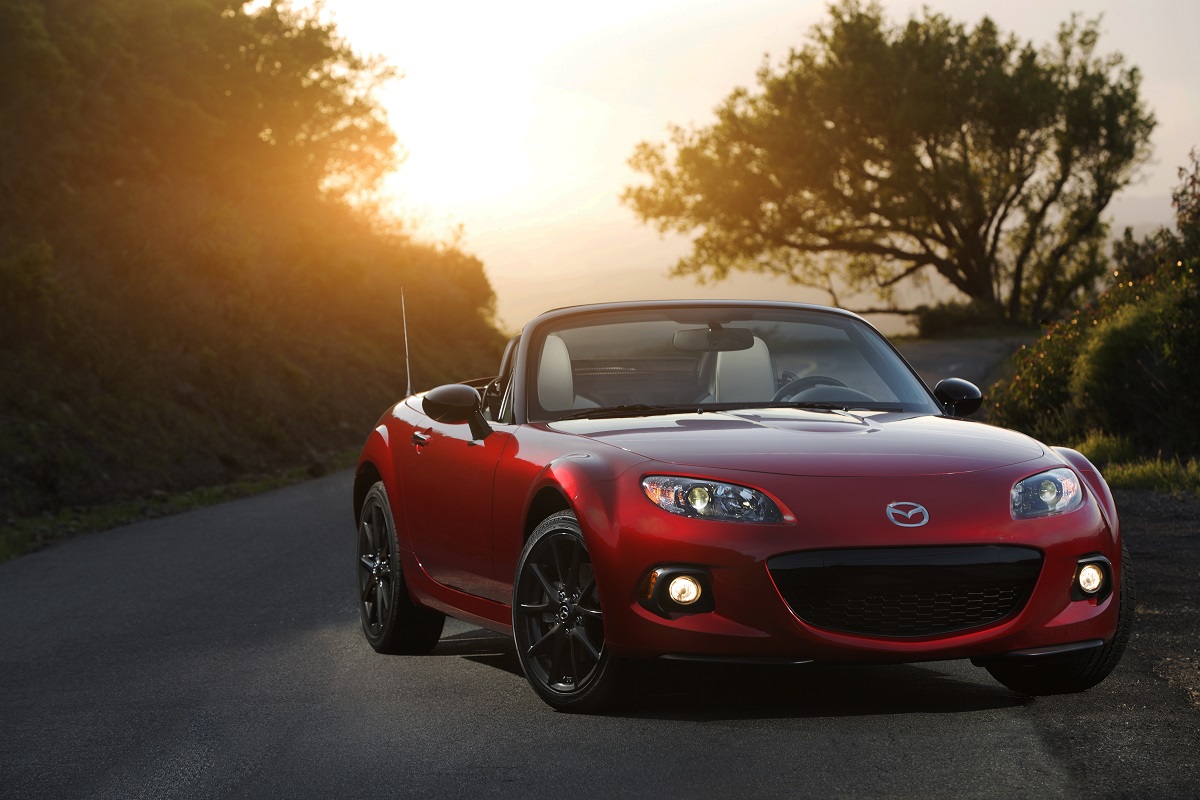 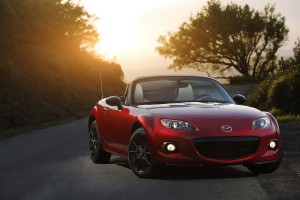 McRibs have come and (thankfully) gone.

Similarly over at Mazda. Since 1989 – the first year for the Miata – many other Mazdas have come … and gone. Not necessarily because they weren’t appealing cars (a twin-turbo RX-7 is very appealing) or even because they were bad cars (like the Millennia, which wasn’t).

It’s just that they were too much – or too little. Or they just lacked that intangible something that the Miata has had since Day One.

And still has today. 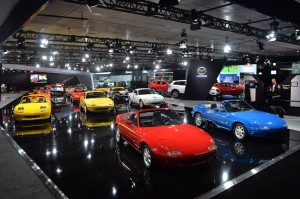 Durable as a Corolla – but unlike a Corolla, a track day implement that made you feel great on track and off. Race it on Sunday, drive it to work on Monday.

And now – hold your breath – an “all new” Miata is on deck for model year 2016, meaning it’ll be available for sale next summer or fall. It will reportedly be smaller – and lighter – and could possibly have a turbo engine.

It might also have a higher price tag, too.

Or buy the current car … in case they mess up the new car? 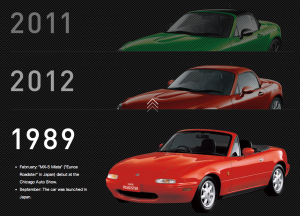 The Miata, of course, is everyone’s favorite British sports car – made by the Japanese. It’s a compact-sized two seater, available in either soft or retractable hardtop versions.

Base price is $23,970 for the Sport with soft top and five-speed manual transmission. The same car with six-speed automatic starts at $26,230.

A Grand Touring – with more power options and a six-speed manual transmission – lists for $26,905. With the folding hardtop, the sticker is $28,665.

For 2015, Mazda is offering a “kitchen sink” 25th Anniversary Edition that comes with every Miata option included (including the retractable hardtop) as well as some equipment specific to this model, such as a special wheel/tire package and interior trim upgrades. The six-speed manual-equipped version stickers for $32,205. With the automatic, the price is $32,655. 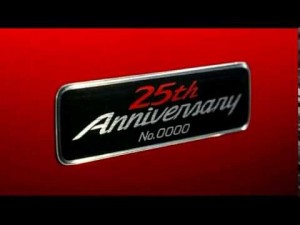 At its entry price point, the Mazda has no direct competition – because there’s no other RWD convertible available for just under $24k. Even the top-of-the-line 25th Anniversary Edition is a steal compared with something like a BMW Z4 roadster – which starts at nearly $50k.

The Miata’s closest-in-kind (and price) cross-shop is the Scion FR-S (base price $24,900)and its Subaru twin, the BR-Z (base price $25,695). However, they’re slightly larger cars (with four seats)and come only in hardtop coupe form.

Which pretty much leaves the Miata in a class by itself.

This is the final year for the current (4th generation) Miata.

An “all new” Miata will debut next spring. 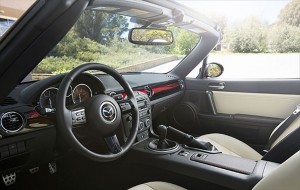 In the meanwhile, Mazda is offering a 25th Anniversary Edition, as described above.

Also: Base Sport roadsters get a new (and nicer) cloth soft-top instead of the previous vinyl soft-top.

As enjoyable as ever.

As affordable as ever.

Not as much of a strutter – or cop bait – as the Sciobaru “twins.”

Big price bump (about $3k) to get the six-speed manual. 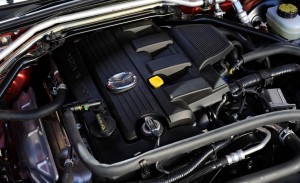 All Miatas are powered by the same 2.0 liter, in-line four. However, rated power output differs depending on the transmission you choose.

But if you choose the optional six-speed automatic, output droops to 158 hp – a significant downgrading.

With the manual (either one) a Miata can do the 0-60 run in the low-mid sixes – about the same as the Scion-Subaru twins (when ordered with their manual six-speed transmissions).

But with the automatic – and the down-powered engine – the Mazda’s acceleration is much more muted. As I noted in my review of the Scion FR-S (see here) a small-engined/sans turbo car with an automatic transmission almost always feels slightly sluggish compared with the same car equipped with a manual transmission, due to the small engine’s fairly low torque output – and the comparatively high RPM at which this torque is produced. (Again, assuming there’s no turbo to boost power at low RPMs.) 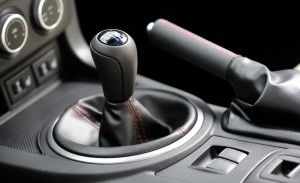 In a manual-equipped car, you can rev the engine up (to where it makes power) before releasing the clutch. In an automatic car, it takes a moment for the revs to build – and power to be made.

However, the Miata’s torque peak arrives earlier – at 5,000 RPM vs 6,600 RPM in the FR-S/BRZ. The Miata is also lighter by several hundred pounds (2,480 vs. just over 2,700 lbs.) and this makes the automatic-equipped Miata a bit less sluggish-feeling than the automatic-equipped Sciobarus – which do the 0-60 run in the low-mid eight-second-range.

Gas mileage-wise, the pick of the Miata litter turns out to be the five-speed manual model, which rates 22 city, 28 highway. Models equipped with the six-speed automatic register 21 city, 28 highway.

Models equipped with the closer-ratio six-speed manual get the same 21 city, 28 highway. 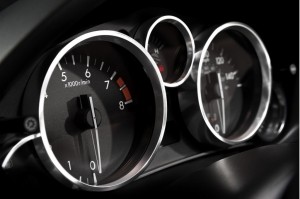 Interestingly, the Mazda’s mileage is not nearly as good as the Sciobaru twins, despite those cars being heavier (and somewhat more powerful, with 200 hp engines). With the automatic, an FR-S (or BRZ) rates 25 city, 34 highway – a respectable (and noticeable) 6 MPG difference on top. Even with the manual transmission, the “twins” do better, MPG-wise, than the Miata: 22 city, 30 highway.

In both cases (all three cases, actually) there is room for improvement.

One of the things to expect from the pending 2016 Miata is better mileage. Probably at least 35 MPG on the highway – necessary, given that 2016 is the year the federal government’s 35.5 MPG average fuel economy requirement goes into effect. Individual cars within a given car company’s model lineup that don’t make the cut will hurt their brand’s overall Corporate Average Fuel Economy (CAFE) numbers – which can mean “gas guzzler” penalties that are then passed on to consumers, making the car so saddled less appealing to potential buyers.

If Mazda can cut a couple hundred pounds off the Miata’s curb weight – which the rumor mill says they are working on – 35 on the highway ought to be very doable. 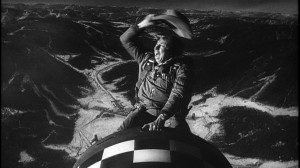 For the past 25 years at least, the car industry has been doing everything conceivable to turn cars into not-cars. That is, into anodyne metal and plastic cocoons meant to isolate us from the external world – and keep the “fuss” of driving to an absolute minimum. From triple insulated door seals to automated manual transmissions, launch control, lane keep and braking “assist” – the driver is being systematically taken out of the drive.

And for the past 25 years, the Miata has been the antidote to all of that.

You can’t help but drive this car. 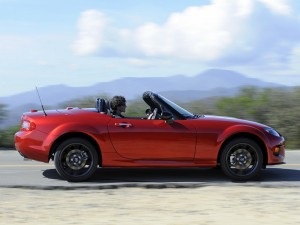 There is just enough power to play with – but you’d better be paying attention. To the gear you’re in at any given moment – and the gear you’ll need to grab at the next moment. The car is happiest when the engine is kept  singing – and that’s entirely up to you.

It is almost impossible not to be.

The stubby shifter – and its short, mechanically gratifying engagements – is an absolute ball to play with.

At 80 it feels – and sounds – like you’re doing 100. The rush of the slipstream; the delightful buzzing of the engine.

As in all truly great driver’s cars, a radio is superfluous.

Needless to say, the handling is brilliant. Needless, because everyone who knows the Miata already knows it. Its reputation precedes it. Tape the headlights, put a number on the door – you’re ready for SCCA club racing. Or just balls to the wall on the street. Which you can actually do, not merely because the car is capable of it, but because you can afford this car.

And because this car runs under the radar. 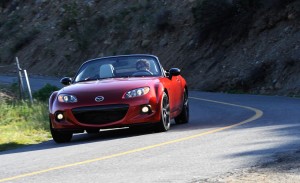 It does not chum the waters and draw the bullet head boys like sharks to a flailing seal  – as an FR-S or BRZ (and most definitely a Z4 or a Porsche Cayman or a new Corvette absolutely will, every time). The constant fear – the feeling that you are being watched and dare not; that even a few MPH over the limit is risking too much … it doesn’t exist when driving a Miata.

That is a huge plus.

So also the car’s ride. Which is much softer than you’d expect, despite the car’s ability to bob and weave. Very everyday livable. Visibility is superb, even in hardtop models – because of the more upright seating position and because of the car’s general diminutiveness.

When it’s time to find a spot to park, almost any spot will do. Zip right on in – usually, without having to back up, then in – repeat.

Zip right back out again when it’s time to split.

The Miata is intimately small – but not confining. You do not sit, Batman-like, hunkered low – as in the Scion-Subaru twins. It is one of the few (perhaps the only) new car in which it is still possible to roll the window down and rest your left elbow on the top of the driver’s side door as you motor on down the road.

Like those “small houses” that are becoming all the rage, the Miata’s designers made thoughtful use of all the available space. For instance – and unlike in the Scion/Subaru twins – the Miata’s twin cupholders are mounted in the center console where your right hand naturally falls … as opposed to unnaturally far back, such that getting at your coffee while the car is moving almost guarantees spillage. The emergency brake lever is mounted on the passenger side of the center console – where it’s not in the way of getting at whatever beverages you’ve got in those cupholders. 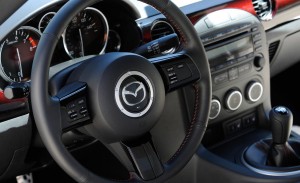 There is amply sufficient leg and headroom for a large man (6ft 3, about 200 pounds) to comfortably spend many hours in the car.  The only deficit is the seats can’t be reclined for by-the-road cat naps; a function of the two-seater layout.

The trunk is also really small – 5.3 cubes. However, you can end-run this limitation by making use of the various other possible storage area, including the vertical cubby in between the seat backs and (in hardtop models) the area behind the back seats. Just remember not to drop the top with stuff back there.

The base Sport trim has everything a car like this needs – except for perhaps one thing. The six-speed manual transmission. This is perhaps the current car’s biggest negative relative  to the Sciobaru twins, which both come standard with six-speed manuals. To get the manual six-speed (in lieu of the standard five-speed manual) one must buy the Club trim – which starts at $26,905. This is about a $3k bump over the base Sport – and also puts the Miata so equipped about $2k higher up than a base model Scion FR-S ($24,900). 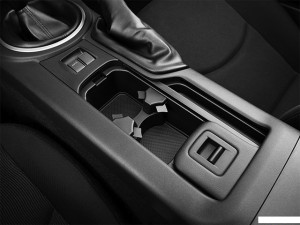 On the upside, once you’re at Club level, you can order a high-performance suspension package which includes Bilstein shocks and a limited-slip differential. Neither the FR-S nor the Subaru BRZ offer suspension upgrades from the factory.

Mazda – god bless ’em – set the tension on the pull-up emergency brake tight. So that you can lock the rear wheels up to make a 90 degree turn (or a 180 degree turn). Believe it or not, in this dreary age of “safety,” most new car emergency brakes are set to prevent this. To have just enough tension to (barely) hold the car stationary when it is parked. But not enough to lock the rear wheels up when the vehicle is moving.

Also, the Miata’s traction control turns off – and does not come on again unless you, the driver, choose to turn it back on again. 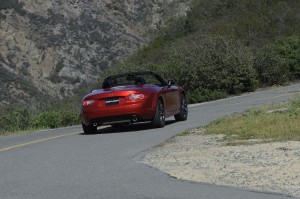 This car is so perfect, the challenge to improve it is a daunting one. There is also the risk they’ll mess it up while trying. The next Miata might be lighter – and faster – as well as more fuel-efficient. But it may also cost more – and be more complicated.