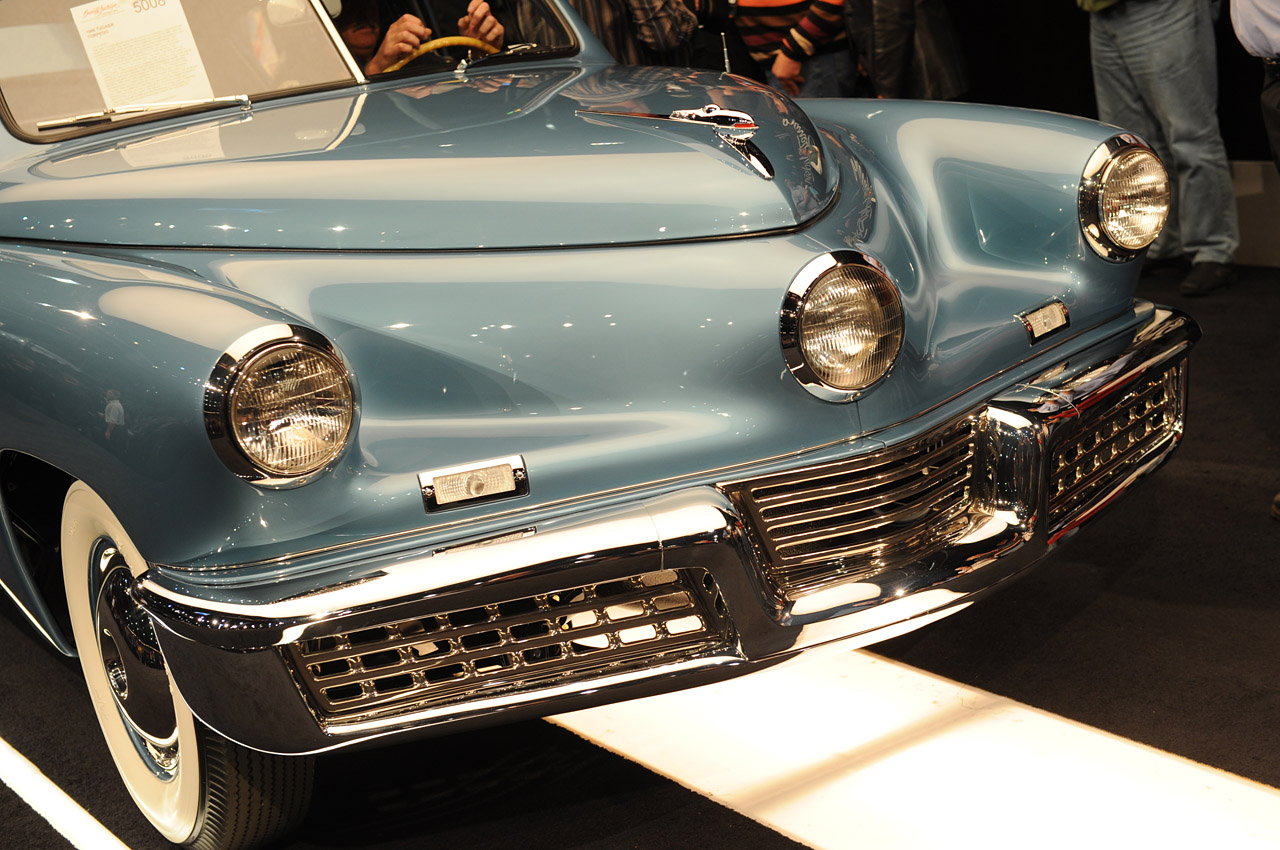 Preston Tucker has been described as a hopelessly naive genius, a con man . . . or some combination of both. 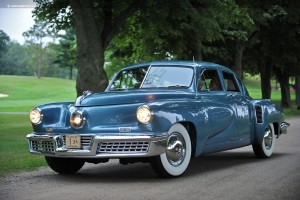 The evidence suggests he genuinely wanted to build cars – not filch people’s wallets. No doubt, he played fast and loose. So do most entrepreneurs.

Unlike GM or Ford or Chrysler, each of which had a bottomless well of money to draw from (WW II defense contracts had been very good for business and the postwar years were even better) Tucker had financial holes in his floorboards and getting anyone to front him cash took persuading that probably included a little fibbing.

Regardless, His dream of becoming a major player in the auto business quickly became a nightmare. His “car of the future” never made it past 1948. Just over 50 cars saw the light of day before everything imploded. Creditors descended like hungry vultures; the SEC was doing its best to put him in prison. The Chicago plant (where B29s had been built during the war) and all company assets were sold off at auction for 20 cents on the dollar. 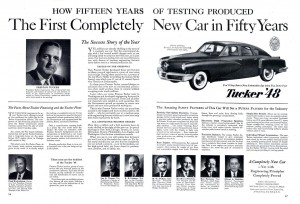 Time passed – and Tucker the legend began to take form.

In the 1988 film, Tucker, Jeff Bridges portrayed him as a ’40s version of maverick GM engineer (and father of the 1964 Pontiac GTO) John Z. DeLorean … without the coke. And the Tucker automobile has only grown in stature since the death of the man whose vision inspired it. Today, surviving examples are high-dollar collectibles, typically selling for seven figures.

This is not surprising.

Because the Tucker was a pretty cool car.

Each one featured pop-out safety glass, seat belts, a padded dashboard and a body structure specifically designed to protect occupants in the event of a wreck. These safety features were decades ahead of their time. It wasn’t until the 1960s that the Big Three began outfitting their cars with seat belts, for example. (Industry marketing types long believed that installing seat belts in cars implied the cars were not safe.) 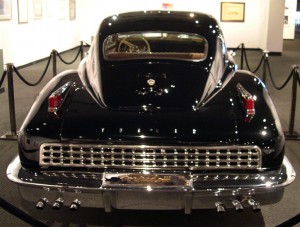 The Tucker also had a separately locking parking brake – so you could still stop the car even if the primary braking system failed – as well as large protective bumpers at each end. Interior knobs and controls were rounded off to limit the potential for injury to occupants in a crash. There was a reinforced “Safety Chamber” in the front footwell area, where driver and front seat passenger could dive “in case of impending collision.” That particular feature was never adopted by other automakers and likely wouldn’t have helped much in a crash. But the Tucker’s pop-out safety glass was a true life-saver. And its clever modular seats – which could be rotated from front to rear to even out wear – anticipated the idea of fold-away/fold-down/stowable seats that are commonplace in minivans and crossover SUVs today.

Tuckers also had a rear-mounted, aluminum engine – like Porsches, VWs and the Chevy Corvair. The placement of the engine enhanced traction by weighting the rear wheels and the low center of gravity of the horizontally-opposed “boxer” layout enhanced the car’s handling and stability.

You had to really try to flip a Tucker.

And unlike the economy-oriented (and equally luckless) Corvair, the Tucker’s flat six produced decent power (150 hp, advertised) and so the car was actually pretty quick for its time: Zero to 60 in about 10 seconds flat – with a very impressive 120 mph-plus top speed. 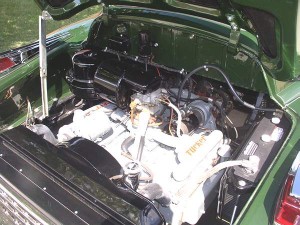 For the late 1940s, this was superior performance. Few cars of the time were capable of triple digit speeds, but the Tucker achieved them easily. A contributing factor was the car’s slippery aerodynamic profile (.27 CD, or coefficient of drag – about the same as a Honda Civic hybrid) and its low-to-the-ground, wife-tracked stance.

Also impressive was the Tucker’s 20 mpg highway fuel economy capability –  not too far off the mark for a modern full-size sedan equipped with all the latest technology, such as computer controlled fuel injection and an overdrive transmission. (The Tucker was actually supposed to have been fuel-injected, too – but cost constraints nixed that in favor of a more conventional – and much less expensive – carburetor.)

While the horizontally-opposed/rear-engined layout was similar to the Corvair’s in general terms, the Tucker’s enormous converted helicopter engine was a monster, displacing 335 cubic inches – comparable to a small block Chevy V-8. It was also converted to water-cooling from the original engine’s air-cooled design. The Corvair, meanwhile, had an engine half that size – 144 and then later 164 cubic inches – and it was designed from the get-go as an automotive powerplant. 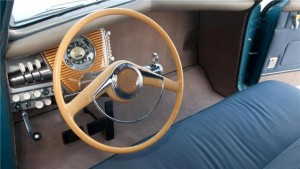 Still, the Tucker’s big six only weighed about 320 pounds fully dressed – chiefly because it was made of aluminum alloy rather than cast iron. It was light enough that two reasonably strong men could remove it by hand for servicing. A 283 CID Chevy V-8 weighed closer to the 500 pounds – considered light for a V8 – and the famous small-block Chevy wouldn’t make its debut until seven years later, in 1955. Other engines circa 1948 weighed as much as twice what the ’48 Tucker’s engine weighed.

The Tucker’s engine featured an industry-first sealed cooling system with an expansion tank. As the coolant got hot and boiled over, the excess would drain into the expansion tank, where it would be drawn back into circulation as the coolant cooled and pressure decreased. Other cars of the  era – and for many years to come – would simply spit coolant onto the road from heat expansion, necessitating regular checks and top-offs (as well as leaving toxic little green puddles in the driveway). 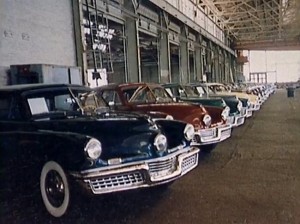 Another very forward-thinking feature of the ’48 Tucker was the car’s signature center-mounted “cyclops” third headlight that turned with the steering wheel while cornering to give the driver a better view of the road ahead. This idea has resurfaced in recent years and a form of it is available on a few high-end luxury cars. Called “Active Headlights,” the system is electronically controlled rather than mechanically actuated, as in the ’48 Tucker – but the concept is identical and Tucker developed it six decades sooner.

The Tucker’s chassis was equally prescient.

In addition to fully-boxed perimeter-style subframes front and rear, the Torpedo featured a four-wheel independent suspension system at a time when virtually every passenger car on the road (in the U.S. at least) used a solid rear axle and leaf springs – a layout that dated back to the Model T Ford.

All-independent suspensions would not become common on anything other than high-performance sports cars and European exotics for another 40 years. 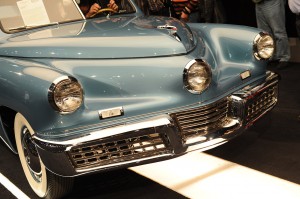 Unfortunately, the aircraft-inspired four-wheel disc brakes and lightweight magnesium wheels envisioned by Preston Tucker never made it to production, once again chiefly due to cost issues.

Nonetheless, the car was taking generational leaps in terms of design. As recently as the 1980s, disc brakes were still fairly rare – especially in American-brand cars. The ’77 Cadillac Seville was one of the first American cars other than Corvette to offer them. Most performance cars of the era such as the Chevy Camaro and Ford Mustang GT came standard with drum brakes on the rear wheels. Four wheel disc brakes did not become a given on performance (and most other) cars until the mid-1990s, some 40 years after Preston Tucker tried to bring them to market.

No one can say the car didn’t make it because it was ugly – or because it wasn’t well-designed. It was – and still is – a stunning piece of work that can be compared favorably with the iconic Studebaker Avanti or even the gorgeous Cord 810 in terms of both its clean lines and the original thinking behind its underlying design. 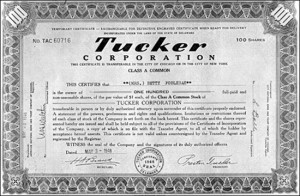 Ultimately, what did in the Tucker was the same thing that’s put the kibosh on just about every attempt by a newcomer since the pre-war era to launch a new car or new car company: finding the money to compete with the established automotive cartels. GM and Ford have long had economies of scale on their side. They can, for example, buy steel and tires and other car peripherals in huge quantities – and thus, negotiate much lower prices per unit – than a small upstart like Preston Tucker (or John DeLorean) could. GM and Ford can also afford to crash test a hundred brand new cars just to test a new design.

Preston Tucker was barely able to build two-thirds that many finished cars.

He over-promised – and got over-extended, prematurely issuing $15 million in stock that led to a highly publicized and hugely damaging investigation by the Securities and Exchange Commission and from there to a trial on 31 counts of fraud and conspiracy to commit fraud. Tucker and seven of his associates were eventually acquitted, but the negative publicity of the trial ruined Preston’s public image and that doomed the Tucker. 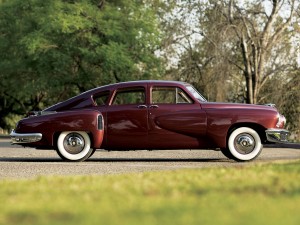 The saga of Preston Tucker proves on thing: You can build a better mousetrap – but you can’t do it successfully without the bucks and the backing to get in the game and stay in the game.

Alessandro DeTomaso – or John DeLorean – could tell you the same thing.

Back in 1948, Preston Tucker expected to sell his car for about $4,000 – comparable to the Cadillacs of the era. Today, it’ll cost you a million bucks and six figure change to acquire one – if you can find an owner willing to part with a piece of automotive history, a four-wheeled reminder of what almost was but didn’t quite make it.

* The Torpedo’s highly aerodynamic (.30 drag coefficient) and instantly recognizable low-slung/fastback exterior shape was penned by stylist Alex Tremulis. The car was low – just 60 inches off the ground – wide and very long – 219 inches – with integrated pontoon-style fenders and doors that were cut into the roofline to provide more room for entry and exit. 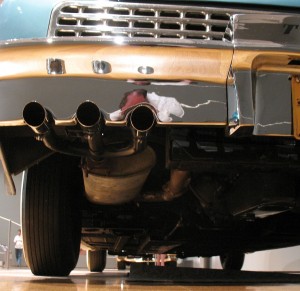 * The Tucker’s four-wheel independent suspension used a rubber torsion tube and shocks to deliver agile for its time handling and a smooth, bump-asborbing ride.

* One of the first publicly released design sketches for what would become the ’48 Tucker appeared in the December 1946 issue of Science Illustrated magazine.

* A little-know legal obstacle faced by the Tucker was that 17 states had laws prohibiting more than two headlights.