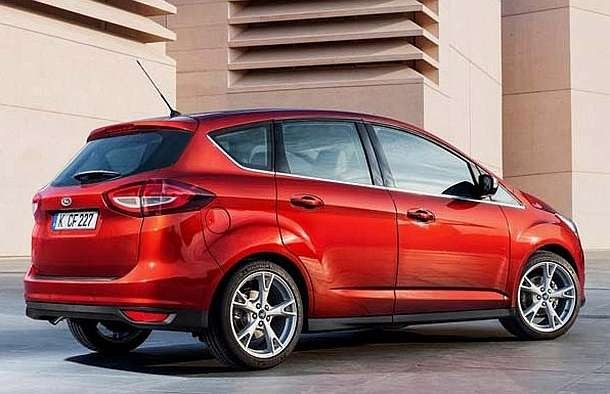 Not all hybrids are slow. 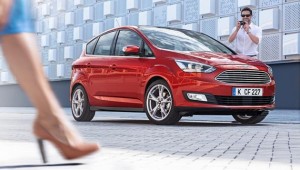 One of the few that goes is Ford’s C-Max hybrid, which is a kind of Jack & Coke to Toyota’s Diet Coke.

You know, the Prius.

The Toyota gives you really good gas mileage. But it also takes a really long time to get going. Ten seconds to 60, on a downhill.

The Ford can get there in just under eight. 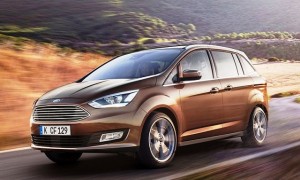 The C-Max is the speediest hybrid you can buy right now … well, for under $25k to start. (Porsche’s Cayenne hybrid is quicker but it damn well ought to be for $77k to start.)

It’s also the roomiest – with much more cargo capacity (52.6 cubic feet vs. 39.6 for the Prius) despite being the smaller-on-the-outside ride.

So, what’s the catch? Just one. Here, speed will not cost you money – or room. But you will pay a bit more at the pump.

The Prius is still the king of fuel efficiency hill, posting an untouchable 51 city, 48 on the highway vs. 42 city, 37 highway for the Ford. So, the age-old question gets changed around a little:

How slow do you want to go? 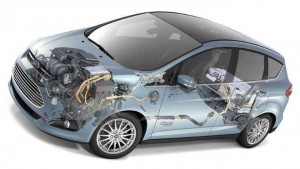 The C-Max is Ford’s perky alternative to the stereotypical Al Gorean hybrid.

It’s a bit less fuel-efficient than rivals like the Prius, but it’s a lot more fun to drive.

Being several inches smaller on the outside, it’s also an easier car to park/maneuver into (and out of) tight spots – and its substantially greater cargo capacity makes it more useful for carting stuff around than the Prius.

Base price is $24,170 for the SE; $27,170 for a top-of-the-line SEL, which comes with an array of luxury amenities that includes heated leather seats and a larger (8-inch) touchscreen. 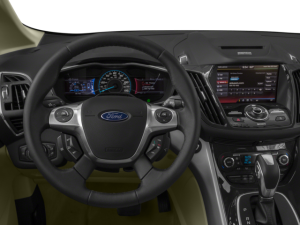 LIke its main rival, the Prius ($24,200 to start; $28,435 loaded) the C-Max is also available in plug-in form. These versions can be recharged externally, via any household power outlet (or especial fast-charger) and are capable of operating on just their batteries and electric motors for much longer (and at higher speeds).

They also cost a few bucks more than the regular hybrid versions: $31,770 for the plug-in C-Max and $29,90-$34,905 for the plug-in Prius. They’ve been a harder sell lately because gas prices have gone down – making the higher buy-in price harder to justify. 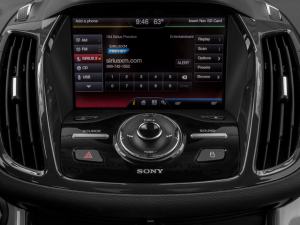 Ford has been upgrading the much-criticized MyFordTouch interface in its vehicles, including the ’16 C-Max, which gets a new Sync3 system along with an upgraded 8-inch touchscreen. Sync features Smartphone-style pinch/swipe controlsand larger, easier-to-comprehend icons for the various apps.

Otherwise, the ’16 C-Max is a carryover, functionally the same as last year.

Which could be trouble – for Ford.

Because Toyota is on the verge of replacing the current Prius with an all-new model that the rumor mill whispers will deliver the expected gas sippyness with a shot of sexiness, too. 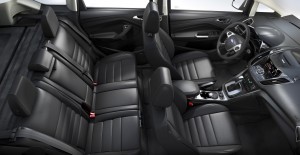 Does not make sad noises.

Pending 2016 Prius might be as quick (or even quicker) as well as more efficient and possibly just as roomy inside, too. 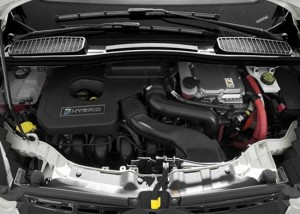 Among hybrids, the C-Max is a horsepower heavyweight.

A fairly large – for a hybrid – 2.0 liter gas engine plus a lithium-ion battery pack and an electric motor produce a total of 188 hp.

The current Prius has a smaller 1.8 liter engine and its combined output (the gas engine plus the battery pack and electric motor) is a mealy-mouthed 134 hp.

The 50-something horsepower difference in output explains the Performance Gap between the two contenders.

Zero to 60 in just under eight seconds for the C-Max, which is hot-roddy for a hybrid and “par” for a current non-hybrid family car or economy car… vs. well over 10 seconds for the Prius. 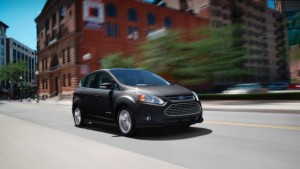 Which is slow for an economy car and under par vs. a current  family car.

In my real-world testing of both cars, I found that the overall difference is about what the EPA says it is.

Well, the spread, at any rate.

If you drive “hypermile” style – turtle starts, lots of coasting, keeping your foot out of it –  and keeping your speed under 70 – you can achieve and even exceed the EPA’s stats, for either car.

But if you drive so as to at least keep up with traffic, your mileage will vary. 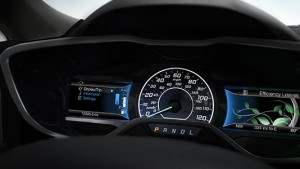 The way I drive – stealy wheely automobiley style – the average in the C-Max was low 30s vs. low 40s in the Prius. So, about the same split (roughly 10 MPG) but less-than-advertised in both of them.

This is still very good, but when gas was $4 a gallon, the MPG advantage was financially more relevant than it is at the moment. With gas currently costing about $2 a gallon, it’s easier to indulge the Ford’s much better performance because the cost of doing so is minimal. Driving the Prius might save you $30 a month – at current gas prices. But how much will it cost your will to live?

Of course, gas prices could change… .

We’ve already touched on the Performance Gap between the C and the P. There is also the Noise Gap. 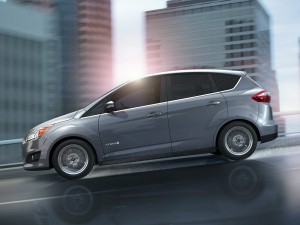 Both cars have continuously variable (CVT) automatics, a type of automatic transmission with just one continuously varying forward speed rather than five or six (or more) fixed gears, as in a conventional automatic. The CVT design eliminates the feeling of gears changing (and shift shock as the gears change) because there are no gears. The car accelerates seamlessly. Push the gas pedal and the car kind of surges forward. The sensation is similar to what you experience in a commercial jet on its takeoff roll.

But CVTs can also be noisy.

Especially if the engine they’re mated to is wheezy.

A CVT transmission is designed to let the engine rev to where it makes the power needed to get you going. But if the engine doesn’t make much power (Prius) it will rev up to what can feel (and sound) like alarmingly high RPMs (at or near redline). And stay there, as long as you keep your foot in it. This happens because the little – and underpowered – engine makes what little power it makes at high RPM. There’s not much going on lower down in the powerband. So when you try to make tracks, the car squeals like Ned Beatty, or at least a mechanical simulation of such sounds of despair and agony. 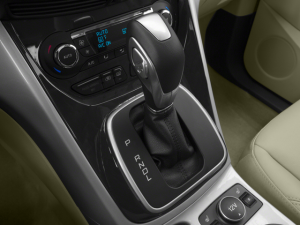 It’s not the CVTs fault, though. It’s the fault of putting a weak engine in front of it.

Ford did not make this mistake.

188 hp is serviceable. There is enough power in reserve that the C-Max almost never feels maxxed out.

The Prius constantly does.

Try driving one up a 9 percent grade, for instance.

Try passing another car on a 9 percent grade.

Or, maintaining 75-ish on the highway. Which – these days – is just barely keeping up with traffic.

The C-max has no trouble doing all those things. Or rather, it does not struggle to do those things. It’s not necessary, as a for-instance, to floor the thing to pass another car.

The Prius is about tapped out at that speed. 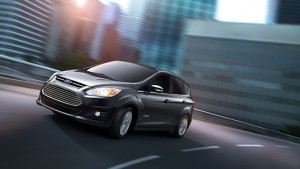 It is the better (the more fuel-sippy) city car, by far. It also has a tighter turning circle (34.2 feet vs. a surprisingly broad-beamed 38.4 for the Ford).

But on the open road, its deficits are much more apparent. The steering is dead-feeling and the drone and whine and other sad noises made by the Prius get old after awhile.

Especially now that you’re not saving that much money on gas.

It has a conventional car-type gear shifter mounted where you’d expect to find it (on the center console) as opposed to the Prius’ video game-style toggle shifter (which has nil tactile feedback) mounted up on the dashboard.

The Prius does. And you cannot shut it off.

Not without a hammer.

The C’s much higher roofline (63.9 inches vs. 58.7 inches) and tall side glass also give you a much better view of your surroundings – as well as much more headroom and cargo room, which we’ll take a look at now.

The C-max, like the Prius, is its own unique animal because there is no non-hybrid version of the thing. Unlike the hybridized versions of, as a counterpoint, the Toyota Camry, Honda Accord and the C-Max’s corporate kin, the Fusion sedan. 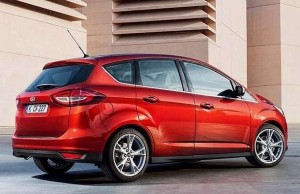 The models just mentioned, in addition to being hybrid conversions, are also conventional sedans – with all the liabilities that come with that layout, including very limited cargo space in smallish trunks and lower rooflines, which usually means less room for your head.

The Camry hybrid sedan, for example, has all of 13.1 cubic feet of trunk – vs. 52.6 cubic feet of cargo capacity in the hatchback C-max.  The taller Ford also has much more headroom in both rows (41 and 39.4 inches, respectively, vs. 38.8 and 38.1 in the Camry). The stats are similarly stilted in the C-max’s favor vs. other hybrid sedans.

But that’s  apples-oranges. How does it stack up against the Prius, which is also a five-door hatchback? 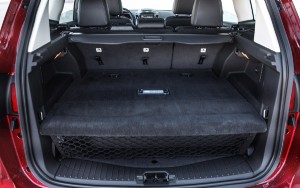 As alluded to earlier, even though it is stubbier, the Ford has more room in almost every category – especially room for cargo. The Prius has 39.6 cubic feet with its second row folded flat. This is a 13 cubic foot difference (one whole Camry’s worth) in the Ford’s favor. Headroom and legroom are better int he Ford as well. By 2.4 inches (headroom-wise) in the front row.

You also get less in the way of gas mileage.

The Prius V isn’t nearly as fuel efficient as the regular Prius hatchback. EPA tags it with a 44 city, 40 highway sticker. Re-read the C-max’s numbers. It does better in city driving (42 MPG) and nearly as well on the highway (37 MPG). 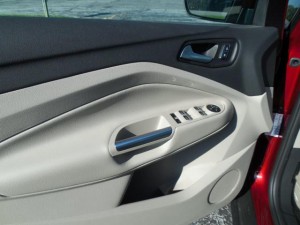 Plus, it is even quicker – because the Prius V is even slower. That thing is a road toad. Same drivetrain as in the regular Prius, but a few hundred pounds heavier equals 0-60 in about 11.5 seconds.

Another area where the C outshines the current Prius is equipment-wise. The stuff it comes standard with vs. what’s extra-cost in the Toyota.

For instance, 17 vs. 15 inch wheels, leather vs. cloth trim and a better standard stereo with Bluetooth and Pandora radio. Keep in mind the two are priced virtually the same to start (the Ford is actually $30 cheaper).

Same deal on the other end of the continuum. 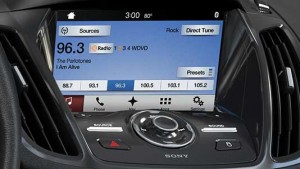 An SEL trim C-max is just over $27k while a top of the line Prius “5” lists for $30,005. The Prius “5” gets you 17 inch wheels (standard on the base trim C-max) foglights (standard on the $27k SEL C-max) and LED lighting, which is one of the few things you get for the extra coin that you don’t get for less coin with the Ford.

The Toyota does offer some things you can’t get in the Ford, such as a solar roof that ventilates the interior while the car is parked and a heads-up display (HUD) like in jet fighters. But the Ford drives more like a jet fighter (as hybrids go) and you’ll have to weigh that in that balance.

You can also get automatic parallel and perpendicular park assist – though in this car (with its tight proportions and superb visibility) it’s really not necessary. 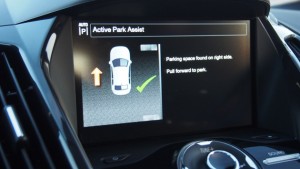 If you want to save fuel and have some fun, the C-max is calling your name.