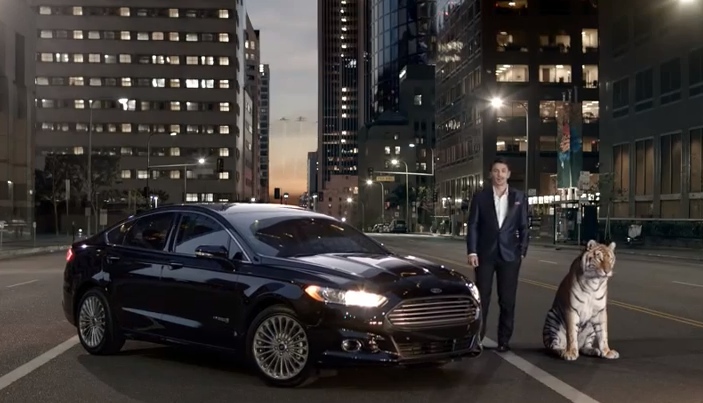 The first mass-production car – Ford’s Model T – had many virtues, but variety wasn’t one of them. Not even when it came to color (Henry Ford decreed buyers could have any color they liked, so long as it was black). 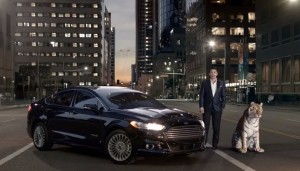 Henry Sr. got away with that for awhile, because there weren’t many alternatives to the T. Then Chevy began offering colors – and other things – and the T began to lose some of its luster.

The situation with hybrids is analogous.

The first successful one – the Prius – did its thing (run on battery power much of the time, burn less gas) very well. But it was – like the T – a dowdy thing. Its main appeal was functional – and economical: Its ability to operate on its batteries – and thereby burn less gas.

Fast forward about 15 years – to now.

Lots of choices in a hybrid – many of them capable of nearly matching the performance-at-the-pump of the Prius, while smoking its performance on the road. Not to mention looking good while doing it – something the Prius still can’t do. 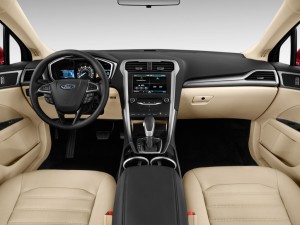 The ’14 Ford Fusion hybrid, for instance. It – and its rivals, the Honda Accord hybrid and the Kia Optima hybrid especially  – are sporty/sexy-looking hybrid sedans and most un-Prius in every way except for their almost-Prius capability to run on not much gas.

The Ford is a sort of middle ground choice – not quite as economical to operate as the new (and 50 MPG-capable) Accord hybrid (reviewed here) but also not nearly as expensive to buy as the nearly $30k to start Accord hybrid. It’s also much suaver-looking (thanks to its Aston Martin-esque styling) than the Toyota Camry hybrid – while being much more fuel-efficient than the sexy-but-thirsty-for-a-hybrid (36 city, 40 highway) Kia Optima hybrid.

A hybrid gas-electric version of the mid-sized Fusion sedan.

Unlike its target rivals – the Accord, Optima and Camry hybrids – the Ford’s EPA rated fuel economy is the same in both city and highway driving: 47 MPG either way. Other hybrids do their best work in city/suburban stop-and-go-driving – where they can operate with the gas engine off for longer periods. But they typically get not-as-great mileage on the highway. 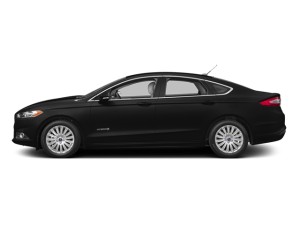 The Camry hybrid, for instance, rates 43 city – but only 39 highway. The new Accord hybrid’s 50 MPG is tops – only the Prius does better. But that’s city driving. On the highway, the Accord’s rated mileage is lower: 45 MPG. 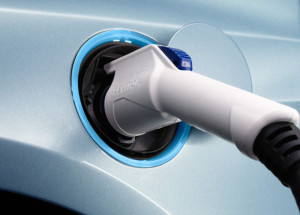 To make a stronger economic case for the  2014 Fusion hybrid, Ford now offers a lower-priced S trim. Previously, the hybrid Fusion was offered only in more expensive SE and Titanium trims.

Buyers interested in luxury as much as economy, meanwhile, can order a heated steering wheel as well as ventilated front seats. 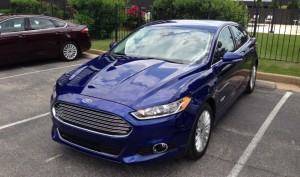 Better city mileage than its rivals.

Not quite as quick as the Accord hybrid – nor as fuel efficient. 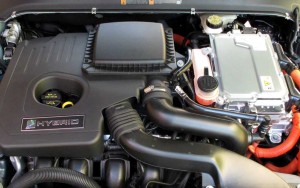 Like other hybrids, the Fusion’s got two ways to get going –  a 2.0 liter gas engine and an electric motor, which provides supplementary power on demand. There is also a lithium-ion battery pack in the trunk to power the electric motor – and also to power electric accessories when the car is stationary or the gas engine is not running.

Like its rivals, the Honda Accord hybrid and Toyota Camry hybrid, the Fusion hybrid can trundle down the road – and reach (and hold) highway speeds on electric drive alone. The gas engine will automatically kick back on when the battery pack depletes, in order to recharge it as well as to keep you moving.

The standard – and only – transmission is a continuously variable (CVT) automatic – a type of automatic that is becoming the go-to transmission in cars generally and not just hybrids because it offers the efficiency of a manual with the ease of use of a conventional (hydraulic) automatic. 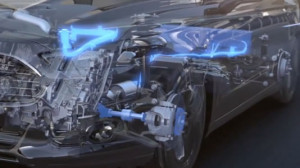 Instead of a torque converter, valve body and fixed forward gears, a CVT uses a pair of variable-diameter pulleys connected by a chain. As the pulleys expand or contract, the groove the chain rides in increases or decreases – and this alters the effective drive ratio, just like shifting from first to second or from second to third (and so on). The big advantage is the CVT’s “gears” (ranges, really) are almost infinitely (and, of course, continuously) variable – whereas a conventional automatic or manual transmission has only so many forward gears, each one a step up – or a step down.

The CVT is always in the right gear for optimum efficiency, whereas a conventional automatic or manual only hit that sweet spot sometimes.

Another CVT upside: There’s no “shift shock” – as from first to second (with a conventional automatic or manual) during full throttle acceleration – because there is no shift. The CVT simply eases into a different ratio, without any discernible sensation. Acceleration – even pedal to the metal – is turbine-like. Uninterrupted forward thrust, until you back off the pedal.

The downside of CVTs is they’re a little noisy – though this is getting better. 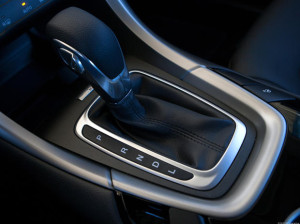 The Ford’s gas mileage – and performance – is an interesting counterpoint to its rivals. It doesn’t quite match the current class- best Honda Accord – the first other-than-Prius hybrid to achieve a 50 MPG (city) rating, nor its class-best acceleration (0-60 in about 7.5 seconds vs. 8.4 for the Ford). But its combined 47 MPG (city and highway) is more balanced than the Accord’s (and other hybrids in this class) typically better city – and typically worse–  highway mileage.

However, there is some question among car jockey test drivers as to the Fusion’s real world vs. claimed mileage.

I’ll get into that now. 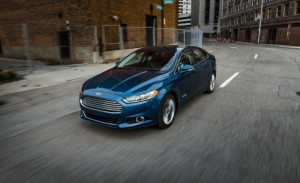 Cue that old lady at the counter barking, “Where’s the beef?”

It just happened that I test drove the Fusion hybrid the week after test-driving the Accord hybrid, so I was able to directly compare their relative performance – and real-world mileage.

In theory, both cars ought to deliver – roughly – the same overall mileage. Even though the Accord is tilted (like other hybrids) more toward the “city” side of the scale, its average – combined city and highway, divided by two – works out to the same 47 MPG as the Fusion’s rated 47 city/47 highway. 47.5 MPG, actually.

Yet – for me – the Accord hybrid’s real-world mileage was noticeably higher than Ford’s.

After a week of driving the Honda, it still had nearly a third of a tank left when the delivery service came to pick it up. As I type this – with two days left before they come to pick up the Ford – the Fusion’s tank is nearly empty, according to the gauge. 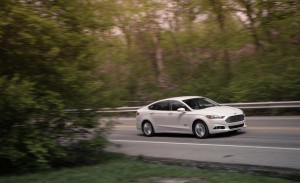 Roughly the same miles driven – by the same driver. But the Fusion didn’t go as far as the Accord hybrid.

Well, one factor is fuel. There’s less of it in the Fusion’s gas tank. Which holds 13.5 gallons vs. the Honda’s 15.8 gallons. Still, that doesn’t quite explain everything. The difference – 2.3 gallons – would theoretically add 108.1 miles of driving range (at 47 MPG), upping the maximum city/highway range to 742.6 miles. But the Honda – with the same fuel load – can go 790 miles.

At least, according to the EPA.

According to me, the Accord has longer legs than the Fusion – 41.4 MPG average (per the Honda’s in-car mileage computer) vs. 40.3 for the Ford. To be fair to both cars, this is much lower than either are capable of. My driving is fast – and I live out in the Woods, far from the traffic jams and stop-and-go driving where hybrids do their best work. Be gentler to either car and you ought to see closer to 45-50 MPG. 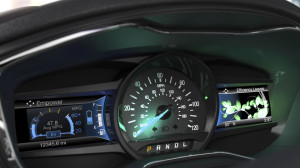 However, the Accord’s higher performance was nice to have out in the Woods – out on the road – where its 1 second advantage in pick-up can be felt (and used). The Fusion’s not slow, mind. Just not as quick as the Accord. Which I would not harp on, if it were also more fuel efficient.

It is, however, less expensive – and that has to be taken into consideration (see below for more on this point).

Handling-wise, the Fusion is – once again – middle-of-the-road. It can be driven faster – and still feel like it’s not being driven too fast – than the Mr. Softie Camry hybrid, but won’t corner at speed as confidently as the Accord hybrid. It’s kind of fun to squeal the tires around the apexes, though. 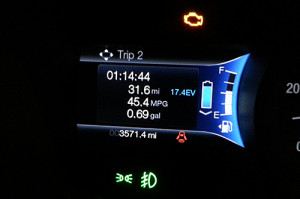 From a hybrid buyer’s perspective, the main beef with the Fusion hybrid may be its hybrid-specific gauges – specifically, the one to the left of the speedo that “coaches” you as you drive to obtain the best mileage, as well as the larger LCD display in the center stack. The gauge to the left is much too small – too small to show more than one readout at a time (such as battery charge) and too small to read at a glance. To get more info, you’ve got to scroll – using little buttons on the steering wheel – throughout he various menus. The other – larger – screen in the center stack is more devoted to the audio system, navigation and apps than to monitoring the hybrid drivetrain’s operations. 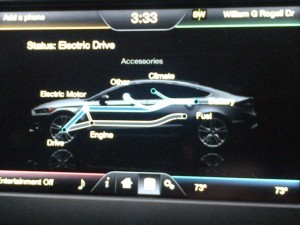 In the Accord, you get a lush – and real-time – display of numerous operating parameters.

The Fusion’s CVT is commendably not-noisy, even under WOT acceleration. And when you’re just loping along, the drivetrain is dead quiet. Literally. Because you can operate gas engine off at pretty high road speeds. Watch the “EV” light to the left of the speedo; when it’s on the gas engine isn’t – and the Fusion is a silent runner. Roll the windows down and all you’ll hear is the wind and the tires – until the gas engine fires back up. And that’s something you’ll need to listen closely for. There’s no shudder, no bark of exhaust. The little “EV” light goes off – and that’s your major clue-in. 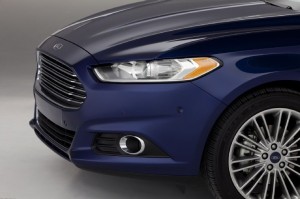 Back in the ’90s, Ford swallowed up a bunch of smaller car companies – high end car companies – and subsumed them under something called the Premier Auto Group. One of these acquisitions (since divested) was Aston Martin.

Notice anything Aston Martin-ish about the Fusion?

There’s a Vantage in the woodpile – so to speak. Especially from the front end. The chin, the eyes . .  who’s your daddy? 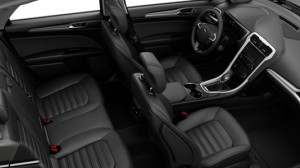 Trunk space, on the other hand, is just 12 cubic feet – which for a mid-sized family sedan is pretty puny. On the other hand, neither the Accord hybrid nor the Camry hybrid are much better – 12.7 and 13.1 cubes, respectively. All the cars in this class – hybrid mid-sized sedans – have small trunks because they are mid-sized sedans. If they were tall-roofed hatchbacks – like the Prius – the space taken by the battery pack would be compensated for by the additional real estate provided by the tall-roof/hatchback layout. But as sedans, they’re inherently constrained; there’s only so much the designers can do within the parameters of the layout. This rather than fuel efficiency is now the chief downside to owning a hybrid sedan like the Fusion or its competitors – relative to the Prius. 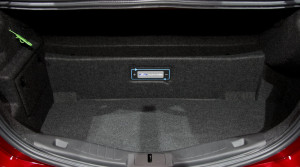 After all, buying one of these hybrids is at least nominally about saving money – as much as about saving on gas. And $2,885 is no small chunk of change.

I think Ford was smart to undercut the Accord, price-wise. It definitely makes up for a lot, performance and economy-wise. 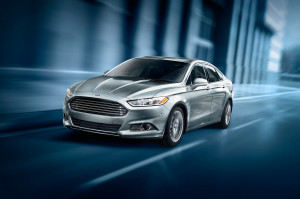 Buyer’s note: If you’re in the market for a hybrid mid-sized sedan, you might want to wait a couple months. Kia is going to introduce an updated version of the Optima hybrid very soon – and knowing Kia, it would not be surprising to me if it one-upped both Honda and Ford. Toyota, meanwhile, has an all-new Camry on deck for the 2015 model year – which is only a few months from now.

It, too, could be a game-changer.

The new Fusion hybrid – and its rivals – are rolling proof that hybrids are finally ready for prime time. They do more than merely work.