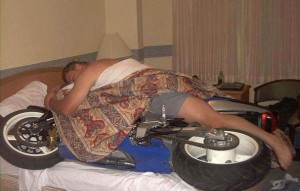 Machinery that doesn’t get used for a long time often doesn’t work when you need to use it. Motorcycles fall into this category. Unless you’re one of the lucky ones who gets to live in southern California or Florida, the arrival of winter usually means extended garage time for the bikes. 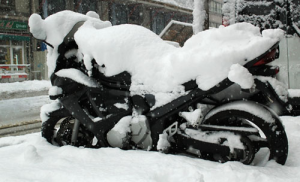 You’d think not being used wouldn’t hurt ’em – but lack of use is its own form of hard use. Especially these days, thanks to ethanol-in-the gas.

But there are other issues to deal with, too.

Not 10 percent ethanol “gas” – which is generally what you’ll be served unless you specifically request (and find) gas that’s still 100 percent gas.

Why does it matter? 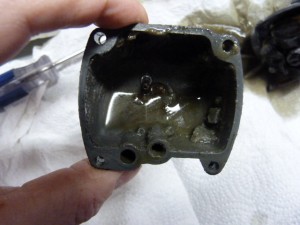 Unlike most cars, there are still a lot of bikes out there that have carburetors. They were common as recently as the early 2000s (cars have been fuel-injected since the late 1980s). Unlike fuel injection, fuel just sits inside the bowl of a carburetor – where it is exposed to air. Which accelerates the fuel’s deterioration. Which occurs faster with ethanol-doused “gas” – because of the chemical nature of the fuel. It does not store as well – or as long. Which leads to gunk – literally – inside the carburetor’s small passages (jets, etc.) which leads to it-won’t-start (or runs-like-garbage) come spring. The ethanol-laced “gas” we’re served also attracts moisture and is (or can be) corrosive to carburetors and other bike fuel system parts – including the tank, which is often made of steel (most recent-year car tanks are made of composite/plastic material) and are susceptible to rusting from the inside out…. feeding your carbs little flakes of rust in the process. 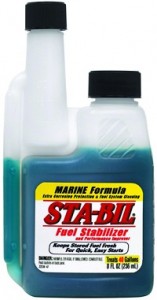 Keeping the tank full helps reduce moisture build-up from condensation. Filling up with 100 percent gas (rather than 10 percent ethanol) increases the fuel’s shelf life, especially if you add a fuel stabilizer (I use marine-grade Sta-Bil) and also eliminates ethanol-specific worries such as the alcohol in the fuel turning rubber and plastic parts to goo inside your bike’s carbs.

I like to run my bikes every couple of weeks – at least once a month – during the off-season. Even if I can’t actually ride them.

Ten minutes or so is usually enough to fully warm up the engine and purge old gas from the lines and carburetor bowls – and refill both with fresh (or at least, fresher) gas. Engine internals will get a nice hot oil bath and seals and so on as well.

If your bike has a center stand, you can also run it through the gears, which is good for the transmission/clutch as well as the driveline – including the chain. 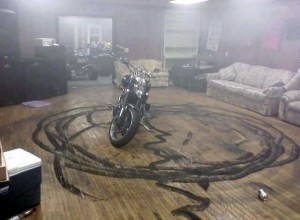 If the bike hasn’t got center stand, walk the bike around the garage a little as it moves the chain around. This way, all the tension isn’t focused on one spot while the bike sits.

If the bike has a fuel shut off valve, turn it to “off” just before you’re ready to shut down and let the engine run until it runs out of gas. With carbureted bikes especially, this is important as it will help keep the fuel bowls from gunking up. If you feel motivated to go one step farther, get a small catch can and remove the drain screw at the bottom/side of each fuel bowl. Let all the gas out, then re-install the drain screw.

Dry-storing carbs is preferable to wet storing them.

Just sitting is hard on any tire, but it’s harder on bike tires. It may have something to do with their construction – which is very different from that of car tires. Many bikes still in regular use still use tires with tubes, for one thing. Cars haven’t since the ’60s. Tube tires (in my experience, for what it’s worth) tend to lose air pressure faster than tubeless tires – but regardless, it’s important to not let either type of tire go flat while the bike sits. 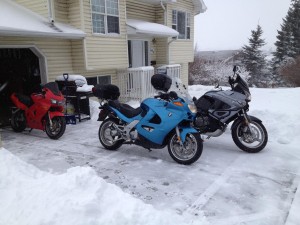 Bike tires also have a rounded rather than flattened contact patch, like car tires. When they lose air, the weight of the bike compresses the tire – and if left that way for a long enough time – it can ruin the tire.

You may have had the experience of going out for a ride on a bike that has fairly new tires – but had been sitting for a good long while. You immediately notice it doesn’t feel right; the bike won’t transition smoothly from upright to leaned over in a curve. There are strange oscillations and noises.

And often, there’s no fix except to get new tires – which sucks when the ones you’ve got still have two-thirds of their tread left. 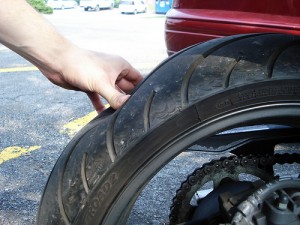 This can be avoided by checking air pressure at least once a month – and by walking the bike around the garage to avoid having the bike’s weight pushing down on the same section of tire for months of just sitting.

Another thing you can do is find a shop that will fill the tires with nitrogen. So filled, the tire leaks less and also (assuming the shop has good equipment) will contain less moisture, which will help reduce internal corrosion (wheel rot, from the inside) another fairly common problem with bike wheels.

Even if your bike has a kick starter, it’s not a good idea to ride it much on a weak or (worse) dead battery because of the excessive load it puts on the much more expensive alternator/generator.

Bike batteries also cost a small fortune – so the longer they last, the better. 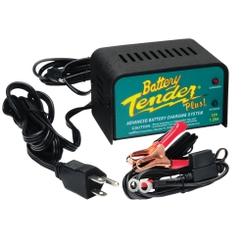 Some guys just disconnect the battery  during the off-season months. That’s a good way to eliminate problems (discharge) arising from minor current draws that may not matter when the bike is regularly ridden but which can drain it dead over a month or two of just sitting.

I take it one step farther by hooking up a battery tender to each of my five bikes. The tender feeds a steady low-amp charge into the battery, as needed – keeping it topped off and automatically shutting itself off once the battery is at full charge.

Most tenders/trickle chargers come with an easy-connect pigtail option that makes it a snap to just plug them in while they’re sitting. I recommend this method over the alligator clamps, which are much more hassle (often, it’s necessary to pull the seat so you can get at the battery) and which can also can spark and – if there is gas vapor – lead to a fire. Most bike trickle chargers have LED lights to indicate charging status: Green for fully charged, Yellow for charging – and Red for dead. 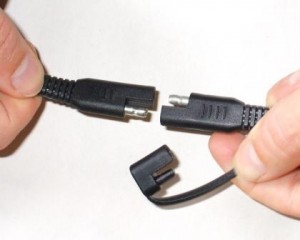 You can buy a battery tender at pretty much any auto parts store or bike shop for about $40. If you have more than one bike, you don’t need to buy a tender for each bike, either.

Just rotate the one tender you’ve got from bike to bike once a week or so.

Even in a garage, there is dust. Also, moisture.

Which can lead to rust.

Once a month, at least, I give each bike a wipe down with a good spray cleaner (Honda aerosol detailer is great stuff), paying particular attention to chrome parts but not neglecting the saddle (the spray detailer is great because it’s designed for metal and upholstered surfaces; rubber and plastic, too). This will keep things shiny rather than dusty and hopefully, not rusty. It’ll also help forestall cracking/premature aging/uglification of rubber grips and so on. 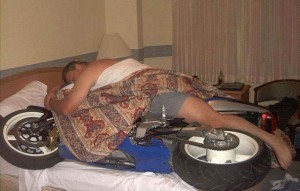 A coat of wax on the tank/panels and other painted surfaces is good medicine, too.

Once all the above’s done, I tuck each bike in under an old cotton bedsheet. These are soft and scratch-proof and a much less expensive alternative to a custom cover and a good way to make use of old bed sheets you might otherwise just toss or give away to the Salvation Army.