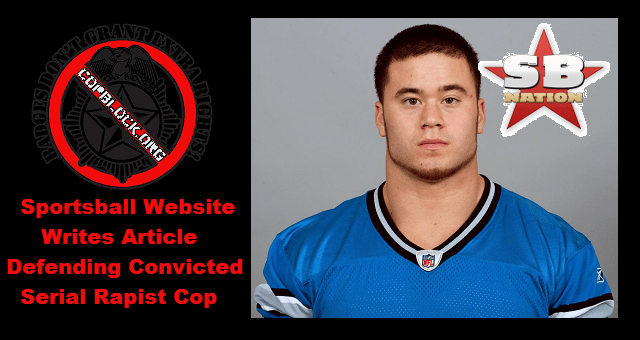 That article, which appeared at SB Nation, was immediately met with criticism and outrage. The website pulled the article, but it had already been cached by Google and copied be several readers. Within hours other media outlets had picked up on this and began publishing articles critical of article, its author and the website that initially published it. This one by Slate highlights some of the most grotesque parts of that article:

In Bates’ view, Holtzclaw was swept up in the furor over treatment of black Americans by police officers in other places, turmoil that had already resulted the #BlackLivesMatter movement and sparked riots in places like Ferguson, Missouri, and Baltimore, a brewing perfect storm that was only getting worse.

“The emotions were already there and all (the public) needed was a poster child and Daniel came along at the absolute worst time for Daniel,” Bates said. “And he was done.”

Yeah, it was all of those people angry about police killings that were responsible for Daniel’s downfall, not all of that raping he did.

His football career ended at Eastern Michigan, in Ypsilanti. Less than one year after starring in the MAC, he was a former college football player, accent on “former.”

If anything caused Holtzclaw to become unhinged, that may, in part, be what did. For the first time in his life, he had failed and the goal he had long sought was no longer available. For the first time, his strength and will had not been enough. Without an NFL dream to aspire to, perhaps he felt that his sacrifices had been for nothing. As a football player, he had believed he was in charge of his own destiny, now he was stripped of his power.

Or maybe it was the NFL’s fault for not fulfilling his dream to be a fuuuuhhhhhhhhtttttball Hero.

Scientists at Boston University determined, according to the HBO report, that lesions in the anterior temporal lobe of many former players’ brains have been impacted by the constant head trauma. In the report, Dr. Ann McKee, told HBO that when damaged, that part of brain, which controls emotions and self-control, can lead to bouts of anger and aggression. The potential connection in Holtzclaw’s case is intriguing, but hardly certain, and without testing, there is no real way to determine if Holtzclaw is affected, or, even if he is, if that may have played a role in his crimes.