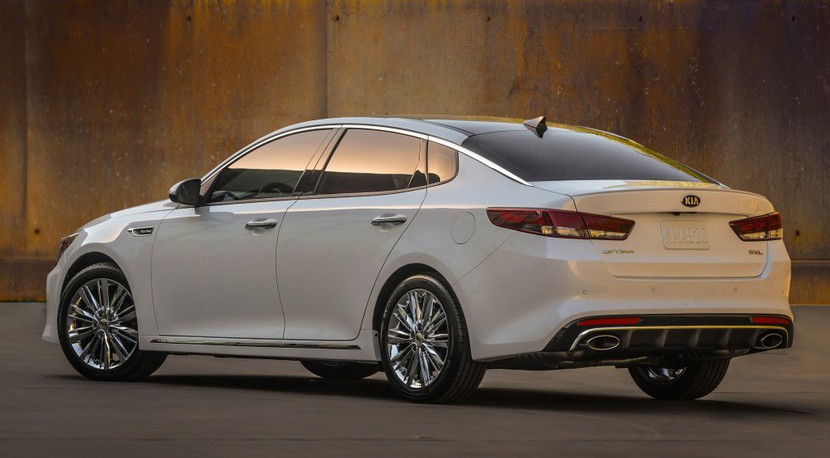 How good are the Koreans at making cars? Here’s a metric: 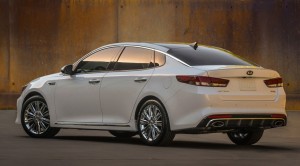 They successfully (hand over fist) sell two versions of the same basic car in a segment (mid-sized family sedans) that’s hard for other car companies to do ok in with just one entrant.

There is the Hyundai-badged Sonata and – for something a bit sportier-looking but basically the same thing – the Kia Optima.

For those not in the know, Hyundai and Kia are the same company – the same conglomerate.

They’re the GM of Korea. 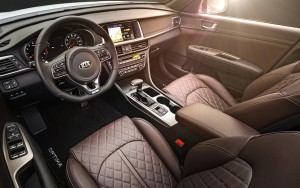 They’ve got the ‘tude, the swagger… and most important, the cars.

So the world turns.

The Optima is the Kia-badged (and styled) version of the Hyundai Sonata.

Or, the reverse. Whichever you prefer.

Both are mid-sized, mid-priced family sedans leaning toward entry-luxury that emphasize different things – sportiness for the Kia, luxury for the Sonata. But they’re fundamentally the same cars under the skin. 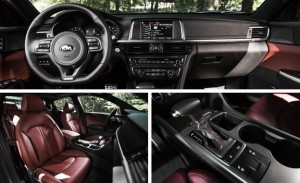 The idea – and it’s smart – is to lure away Camry prospects with the Hyundai and Accord/Mazda6 buyers with the Kia.

Whichever ends up getting bought, the business goes to the same outfit.

Base price is $21,990 for an Optima LX with 2.4 liter engine (no turbo) and six-speed automatic. You can upgrade the LX to a new 1.6 liter turbocharged four paired with an also-new seven-speed automated manual (the identical drivetrain is sold in Hyundai livery as the Sonata Eco) for $23,990.

Next up is the Sport, which is defined by its 2.0 liter turbocharged engine and (yup) sportier suspension tuning and trim. You also get red powder-coated brake calipers, paddle shifters for the six-speed automatic, more aggressive-looking exhaust tips and an upgraded gauge cluster. 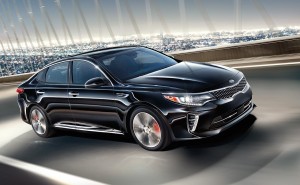 The top-of-the-line Optima SXL also gets the 2.0 engine but it’s tuned more for touring and is fitted out with all the conveniences that are optional in the lesser trims and also comes with its own special chrome trim and premium quilted leather seat covers.

The ’16 Optima gets a subtle but major overhaul.

It retains the previous car’s overall profile but is slightly longer and wider and roomier; it also gets new drivetrain options (the 1.6 liter engine and seven-speed automated manual).

Also, the rated horsepower of the optional 2.0 liter engine is down from 274 previously to  245 hp, but the redesigned Optima is slightly lighter than the previous model and so performance actually upticks  a bit.

However, the Optima – like the Sonata – accelerates about as quickly with the smaller 1.6 liter engine and gets better mileage, too.

More on this in a moment. 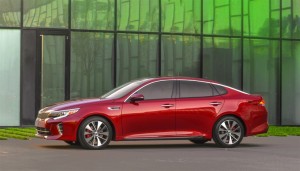 Three engines to choose from (vs. the typical two).

Backseat’s less cramped than it used to be.

Trunk is larger than it used to be.

All three engines are four cylinder engines; no optional V6 (as in Accord and Camry).

It’s not as quick as it looks.

Back seat is still tight vs. limo-like (in comparison) room in the back seats of the Camry and Accord. 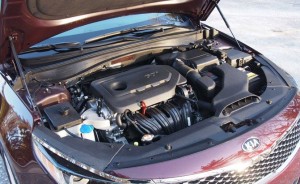 The Optima (like the Sonata) is available with your pick of three engines – an expansion of options from the typical two. They are, however, all four cylinder engines (two of them turbo-boosted) while rivals like the Camry and Accord offer a standard four cylinder or the option of a V6.

Kia/Hyundai – like a growing roster of automakers – is going with small fours (turbo-boosted, to maintain the performance expected by buyers) over larger V6s that made power the old fashioned way (by more pistons and more displacement) because of steadily increasing pressure to meet federal fuel economy mandatory minimums – CAFE, in the language of the federal bureaucracy. The standard is now 35.5 MPG and that is hard to meet with a V6, but feasible with a four. 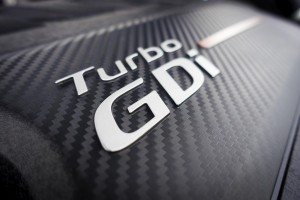 So, the base trim Optima comes standard with a 2.4 liter four with a 185 hp rating – stronger than the Camry’s standard-issue 2.5 liter, 178 hp engine and even-Steven with the Accord’s standard 2.4 liter, 185 hp engine. 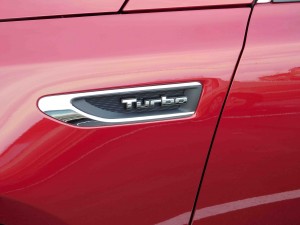 This version of the Optima can accelerate to 60 in about 8.1 seconds – slightly quicker than the base-engined Camry (which needs about 8.3 seconds) and slightly slower than the Accord (which can do the run in 7.8 seconds, quickest time in the class).

Now here’s where things get a little confusing. 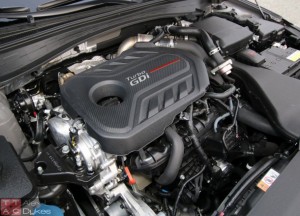 There are two optional Optima engines – both turbocharged. One (the 2.0 liter four) is marketed as the Performance engine; the other (a 1.6 liter four) the Economy engine.

But it’s not exactly so.

The “Top Gun” Optima engine in terms of advertised power is the 2.0 liter turbo four that is standard equipment in the sport-themed SX and the top-of-the-line SXL. It makes an advertised 245 hp, which is a downgrade from last year – when the same basic engine produced an advertised 274 hp.

So equipped, the Optima can do the 0-60 run in the low sevens. Which is not much speedier than the base-engined Optima with the non-turbo four and much less speedy than V6-powered rivals like the Accord and Camry, which are capable of getting to 60 in just over six seconds.

Gas mileage is pretty good: 22 city, 32 highway. But this is only slightly (negligibly) better than the V6-equipped (and much quicker) Camry’s 21 city, 31 highway and slightly worse (highway-wise) than the Accord V6’s 21 city, 34 highway. 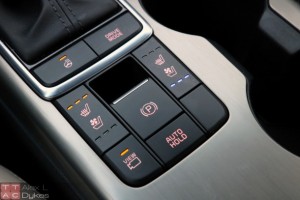 Meanwhile, there is the Economy option – the newly available 1.6 liter engine, which is paired with a seven-speed automated manual transmission. Though it carries a much lower advertised horsepower rating (178) this engine manages to scoot the Optima to 60 in the high sevens, a decent number (because it’s pretty close to the number delivered by the 2.0 engine)  and the fuel economy numbers are better-than-decent: 28 city, 39 highway – class best and close to the numbers you’d get if you were to buy a hybrid sedan.

The 1.6 liter engine (and engines like it) are the Wave of the Future. Expect them to get even smaller and more heavily turbocharged as Uncle’s fuel economy fatwas become ever-more-impossible to comply with.

Think I’m being dramatic? The CAFE standard will uptick to 54.5 MPG just nine years from now (2025) and – absent the advent of some miracle technologies – there is no plausible way six cylinder engines will make the cut and even four cylinder engines bigger than 2.0 liters are not likely to survive. 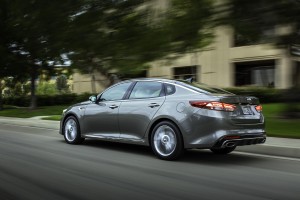 With three available engines, the Optima offers three different personalities – as opposed to the usual two in this segment.

With the standard 2.4 liter engine, you’ve got a solid A to B transportation appliance, very similar in personality to the four cylinder-powered versions of the Camry and Accord. There’s adequate Go, it’s not too slow.

It won’t excite you – but it won’t disappoint you, either.

Competence is the criteria here – and the 2.4 liter Optima delivers that as much as the others. The Accord does offer the prospect of a bit more verve in that you can get it with a manual – and the four cylinder Camry’s a bit slow-pokey in comparison. But there are no startling differences on this side of the aisle. 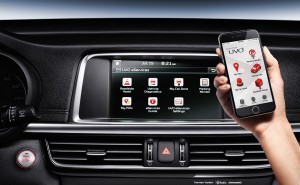 Differences are more obvious when cross-driving the 2.0-equipped Optima vs. the V6-powered versions of rivals like the Accord and Camry.

The Kia is outgunned – noticeably less quick – and while it has more torque (260 ft.-lbs.) and sooner (it’s full-on at just 1,350 RPM) courtesy of its turbocharger, the V6 Accord and Camry pull harder and don’t seem to be working as hard, even with the pedal to the metal.

The performance of the turbo 2.0 engine has – in my experience, test driving this and other Hyundai and Kia vehicles equipped with it – been something of a letdown in context of the advertised power/torque. Even last year’s more-potent-on-paper version didn’t outperform the on-paper-less-powerful versions of rivals like the V6 Accord and Camry.

To be clear, the 2.0 engine is not a bad engine. It propels the Optima with class-competitive swiftness. It’s just not as swift as the top guns in this class.

But, it does cost less. 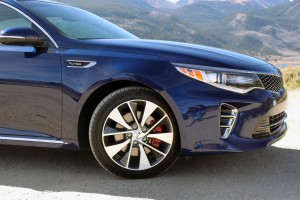 And here we come to the Wild Card. The third Optima engine.

It’s the newly available 1.6 liter engine – standard equipment in the much less pricey (vs. the V6 Camry and Accord) Optima LX.

The rated output of this engine – 178 hp and 195 ft.-lbs. of torque – belies the performance you get with this engine. Which may be a function of the efficient and very quick-shifting seven-speed automated manual transmission that’s uniquely available with this engine.

The 1.6 liter Optima can run to 60 in the sevens – and while that’s not as quick as the V6 Accord or Camry, it’s not much slower, either. It’s also pretty close to the performance you get with the 2.0-equipped Optima – and the mileage is much better. 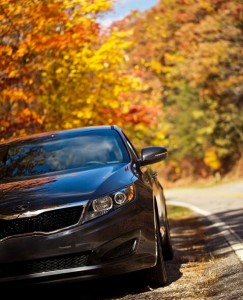 It’s the gem of the bunch – and not just because it’s the best value.

The Optima’s strongest hand has always been its attractive packaging.

It is an impressive-looking car. An expensive-looking car. This is not surprising given the man responsible for the Optima’s styling. Peter Schreyer – who used to work for Audi and now works for Kia.

Kia wanted their cars to look like pricey German cars – so they hired the guy who designed them.

The ’16 is an evolutionary refinement of the previous – and very well-received – Optima.

The changes are subtle but significant. 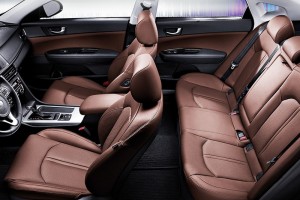 It’s longer and wider – and roomier inside. Especially the second row – which was, if not cramped, less roomy than the backseats in rivals like the Camry and the Accord. The old car had 34.7 inches of legroom in the second row; the new car has 35.6 inches. It’s still not as much room as the Camry (38.9 inches, class best) or the Accord (38.5 inches, close second) but it’s enough to be adult-viable. In this vein, headroom is upped slightly as well – to 37.8 inches from 37.6 previously. This is more than in Accord (37.5 inches) but still not quite as much as in Camry (38.1 inches). 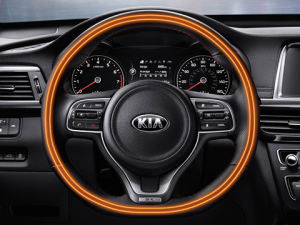 But inches here or there aren’t what make the Optima a standout in this segment. It’s the arresting visuals. The premium-car look of the thing. Park one next to a Camry or Accord, see what I mean.

They are not ugly by any means. But they aren’t exciting. Don’t turn heads. Elicit comments and thumbs-ups.

The Kia does.  People ask what it is. 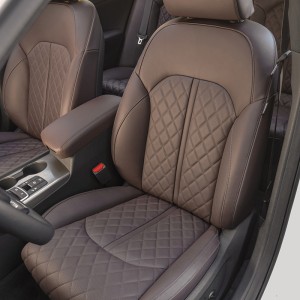 Though historically Kias and Hyundais have been the value proposition, that’s changing.

The Optima is still a bit less expensive (to start, at least) than its blue chip rivals – and it still has the best “whole car” (five years, 60,000 miles) and engine/driveline (10 years, 100,000 miles) warranty coverage you can get.

But you can also get things like quilted leather seats that look like they were pirated from a six figure BMW 7 Series – with three stage heaters and coolers. And heated rear seats. With privacy shades for the backseaters. A heated steering wheel. Those Dynamic Bending Headlights mentioned above – which track with the curves, in tandem with steering wheel movement. Also Adaptive Cruise Control, a nearly full-roof length panorama sunroof. Power-folding outside rearview mirrors.  Eight-inch LCD touchscreen. 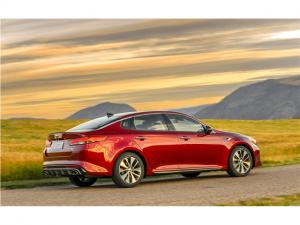 The availability of such in a $30k-ish car makes one wonder why people still buy $100k cars.

But the quilted (and heated) leather seats? You can use them every day.

If your default setting has been Camry or Accord, maybe it’s time for a reset.