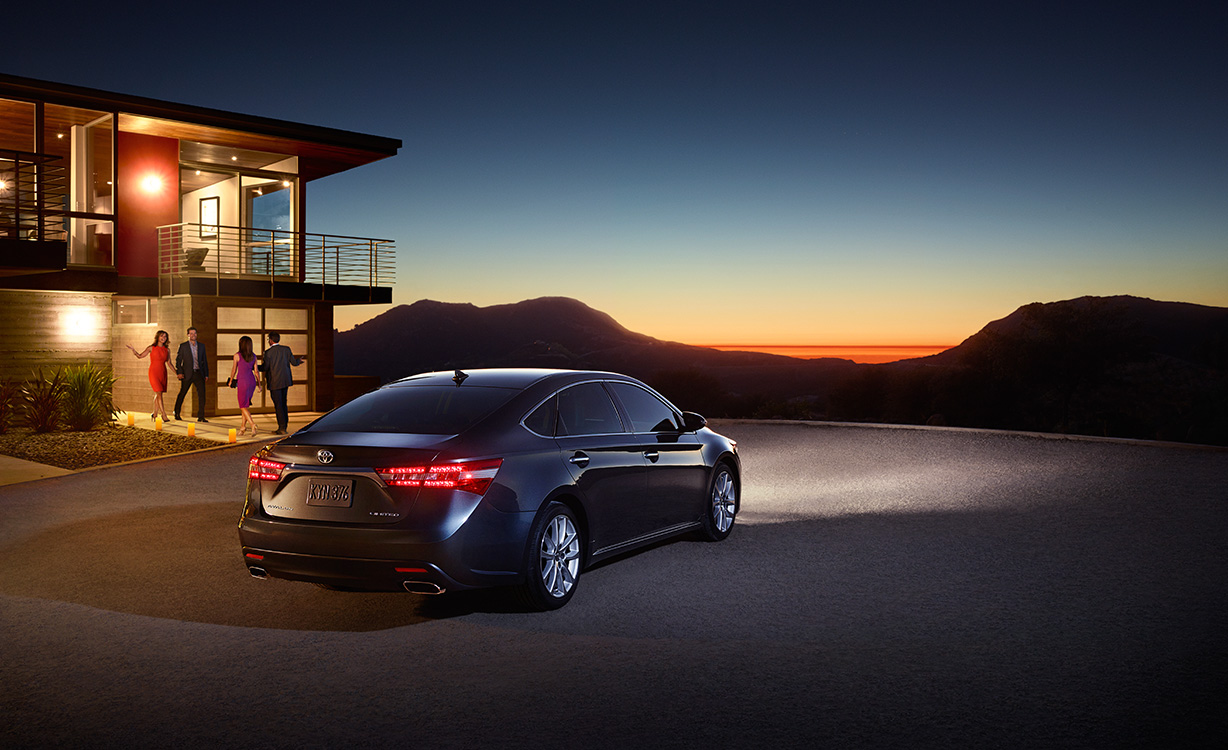 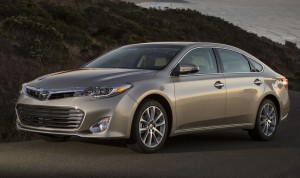 All three spring from the same basic platform – car industry jargon for a common chassis – and share major components, including the 3.5 liter V6 that’s available in the Camry and standard equipment in the other two.

This review’s about the Avalon version which – not surprisingly – is a little roomier than the  physically smaller (mid-sized) Camry but which – surprisingly – is actually a bit more roomy up front than the Lexus-ized version of this car, the ES350.

It (the Avalon) also has a bigger trunk and nearly the same (very generous) legroom in the second row.

The Avalon also offers Lexus-like features such as LED headlights, heated (and cooled) seats, power rear privacy screen, a seven-inch touchscreen (same size as the ES350’s) and the same suite of apps, including Siri Eyes Free and tunes piped through a premium JBL stereo, just like the ES350.

The Avalon is Toyota’s largest – and most luxurious – sedan. To get nicer (or larger) you’d have to step up to Lexus.

Which will, of course, cost you Lexus money. 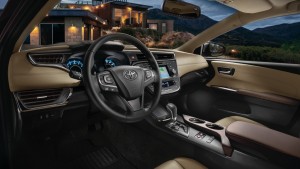 And the Lexus is actually the smaller car.

To get a bigger car (but still less room) you’d need to step up to the LS460 – Lexus’ top-of-the-line sedan – and now you’re talking serious money.

A top-of-the-line Avalon Limited – which comes with more luxury amenities than the ES350, including tri-zone climate control vs. the ES350’s dual-zone, an 11-speaker JBL stereo, 10-way power driver’s seat (vs. the ES350’s eight-way seat), side mirrors with puddle lamps, leather (vs. “premium” vinyl) upholstery and 18-inch wheels (vs. 17s on the ES350) stickers for just slightly more than the lesser-equipped Lexus – $40,450.

Possible price-equivalent cross-shops include the Chevy Impala (which shares a platform with the Cadillac XTS) and other large – and posh – but not-luxury-badged FWD sedans like the Hyundai Azera/Kia Cadenza. 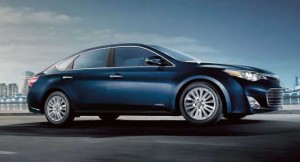 Changes for the 2016 model year include a new front clip for Touring trims and minor styling changes for other Avalon trims.

Oddly – and possibly risky – the Touring trim’s suspension has been firmed up. Historically/usually, “touring” means softer and more comfortable-riding.

But, non-Touring trims (XLE, XLE Plus and XLE Premium) get a suspension tuned for comfort. 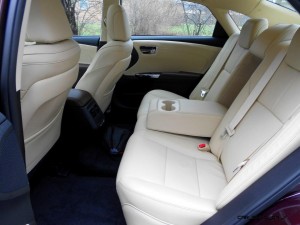 A Lexus in all but name (and price).

A big car… but not a huge car (like Impala).

Quicker (and roomier) than Azera/Cadenza.

Roomier in back than in a Lexus LS460.

Electronic assists are not intrusive (radar detectors not rendered useless by constant false alarms generated by the car).

Buttons and controls are all larger than typical and easier to use as a result.

Price overlap with the Lexus ES350 – without the prestige of owning a Lexus ES350.

Some Lexus-like (and Azera-like) amenities not available – such as a panorama glass roof or a heated steering wheel.

Re-tuned Touring suspension may feel too stiff to traditional Avalon buyers – while relatively low cornering limits may be not enough for buyers who want a genuinely sporty large sedan. 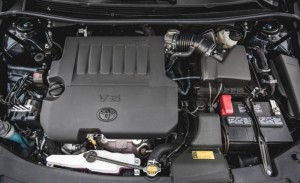 Unlike the Impala – which offers a choice of four cylinder engine (standard) with the option of a V6 – all Avalons, regardless of trim, come standard with the same engine.

It’s a 3.5 liter, 268 hp V6 – the same engine that’s optional in the Camry and standard in the Lexus ES350. As in those two, the V6 is paired with a six-speed automatic which – in the Avalon – has three driver-selectable modes (Normal, Eco and Sport) as well as a driver-selectable manual-shift mode.

Though the rated output of the Avalon’s V6 is less than the Impala’s optionally available 3.6 liter, 305 hp V6 (and the Azera/Cadenza’s standard 3.3 liter, 293 hp V6) the 0-60 acceleration capability of the Avalon is about as good as it gets in this class: 6.3 seconds, dead heat with the Impala and quicker than the more powerful (on paper) Azera.

A Chrysler 300 equipped with its optional 5.7 liter V8 is quicker than all of them – but it’s a rear-drive car and so an Apples-Oranges comparison. 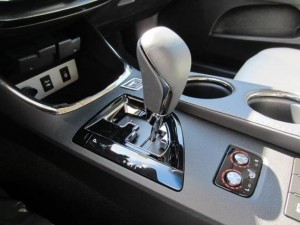 It’s not surprising that the Avalon’s quicker than the Impala – which is a bigger (and heavier) car. What is surprising is how much quicker the Avalon is than the Azera (and its corporate cousin, the Kia Cadenza), which is a more powerful car as well as a smaller car (closer to mid-sized while the Avalon’s full-size).

It also explains the Avalon’s slightly better fuel economy – 21 city, 31 highway vs. 20 city, 29 highway for the Azera. The Toyota also edges out the V6 Impala, which carries an EPA rating of 18 city, 28 highway – which is (again) not surprising given it’s a larger (and heavier) car.

Couple of things about the Impala, though. 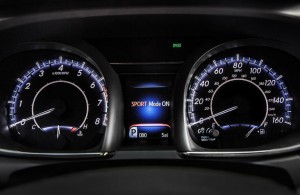 One, it is available with a four cylinder engine and while the mileage with this engine is no great shakes (22 city, 31 highway) and the acceleration is gimpy compared with the V6 Avalon’s, you can pick one up for just over $27k, sticker – which is abut $5k less than the base price of the least expensive version of the Avalon.

Two, Chevy offers a version of the Impala that can run on either gasoline or compressed natural natural gas (CNG). The mileage is not spectacular (17 city, 25 highway when running on gasoline; 16 city, 24 highway when you switch to CNG) but the advantage here is that natural gas is really cheap – even when gasoline isn’t. 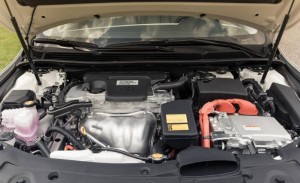 If gas prices tick back up to $3 or $4 a gallon, the CNG-capable Impala could be as economical to operate as a hybrid… but without the hybrid’s complexity (or gimpy performance).

The Toyota counterpoint is the hybrid Avalon – which is capable of 40 MPG in city driving and 39 on the highway. This is twice the CNG Impala’s city mileage and nearly that on the highway, too.

Few cars are as quiet inside as the Avalon.

This includes Lexus kin like the ES350. Drive both, see for yourself. Better yet, have someone else drive both while you sit – blindfolded – in each, not knowing which car you’re in before the drive. 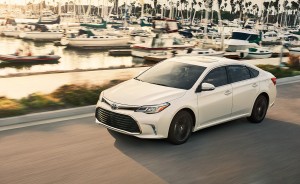 You will be hard-pressed to tell the difference.

Which is good for Toyota – not so much for Lexus. Good thing they’re the same outfit.

Then there’s acceleration. The Toyota’s quicker than the Lexus – notwithstanding both cars have the identical drivetrains. But the slightly smaller ES350 is about 100 pounds heavier than the Avalon (3,571 lbs. vs. 3,461 lbs.) and that accounts for the difference.

Few expect the Avalon – which does not look speedy – to be speedy. 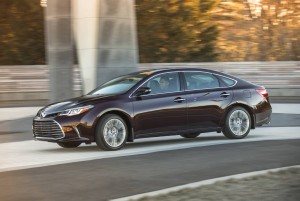 And because it’s so quiet at speed (fifth and sixth gear are both overdrive gears, which cuts engine revs at 80-ish to not much faster than idle speed) it is very easy to lose track of just how fast you’re going. Which is why it’s an even better thing that the Avalon is radar detector-friendly. In some new cars, the e-clutter produced by the in-car “safety” systems (such as blind spot monitors, lane keep assist, parking assist and automated braking) renders radar detectors functionally unusable because of constant false alarms. I was happy to discover that the Avalon’s systems did not interfere with my radar detector – which made driving the Avalon even more enjoyable.

Toyota has firmed up the ride of the Touring trim – which is odd given the Avalon’s all about comfort rather than cornering. The good news is it’s still not particularly firm by sport sedan standards (drive an Avalon and something like a Lexus GS350 back to back and you’ll grok what I mean). But it is firmer – and if you’re used to (and like) previous iterations of the Avalon, you may notice the change and not be happy with it. 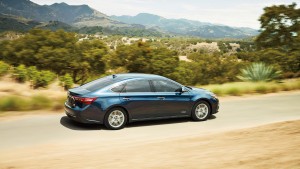 Touring models also come with 18-inch wheels – and stiffer sidewall tires. The base XLE, XLE PLus and XLE Premium trims have 17s – and these confer a softer ride.

The Touring trim’s firmer suspension calibrations do reduce body roll … if you’re cornering the Avalon at speeds most Avalon drivers will never attempt in a corner. Only car journalists throw cars like the Avalon into a sweeper posted 35 at 65.

Of course, it is because car journalists test driving Avalons that way will notice body roll – and bitch in print about it if they experience it – that Toyota cinches down the suspension in accommodation. It doesn’t make sense from the buyer’s point-of-view. But then, buyers are influenced by what they read… and it’s journalists who write… so… . 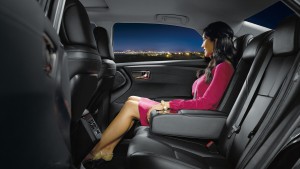 That said, the Avalon feels lighter on its feet than its rivals – because it is.

The others are fatties. And feel it.

But the Avalon’s wide-load turning circle is compensated for by a comparatively short hood/front end – which (from the driver’s perspective) makes the Avalon seem like a smaller car than it is. Especially relative to something like the Chrysler 300 – which has a coffin-length nose that seems to project ten yards ahead of the windshield. 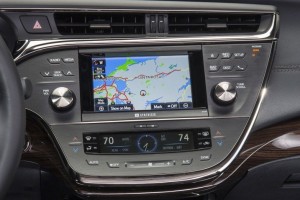 Also helpful – the exceptionally ergonomic controls, such as the large and meaty gear shift handle that conforms nicely to the shape of the underside of your hand – and the larger-than-typical buttons on the center stack (which  is actually a shelf that kind of projects outward toward the center console) that are big enough such that you rarely hit the wrong button – a common problem in cars with smaller buttons.

It used to be said – a long time ago – that doctors preferred Buicks even though they could afford Cadillacs because they wanted luxury (which Buicks had)  but not the gaudiness (which Cadillacs had). 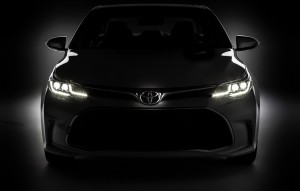 The Avalon is very Lexus-like in terms of its overall niceness, the equipment it comes with (and offers). But it runs a much lower profile than a Lexus. Even though its prices roughly straddle those of the ES350 – its brother from another mother (so to speak). It is a car for the person who wants the comfort – and the luxury feel – that would come with an ES350.

But not the attention that comes with the Lexus badge.

On the outside, the Avalon is the biggest of the three. Longer overall even than the more prestigious Lexus ES (195.3 inches vs. 193.3 inches). Both cars share the same 111-inch wheelbase, though. 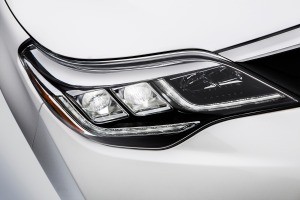 The Avalon has slightly more front seat legroom (42.1 inches) vs. the Lexus (41.9 inches) and just slightly less backseat legroom (39.2 inches vs. 40 for the ES350). The Camry – smallest of the brothers on the outside (190.9 inches long overall; 109.3-inch wheelbase) has nearly as much space in both rows (41.6 inches and 38.9 inches, respectively) notwithstanding it’s a mid-sized car vs. the full-sized status of the Avalon. 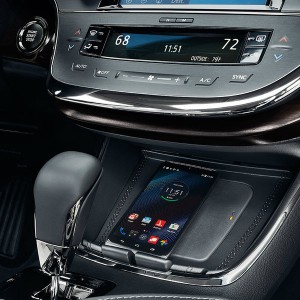 But the Impala’s trunk (18.8 cubic feet) can’t be matched by anything else in the class.

The Avalon’s standard LCD touchscreen gets the latest version of Toyota’s Entune software/functionality – including smartphone-style finger pinch and swipe inputs. The stereo has a 20 minute cache that allows rewinding of satellite radio broadcasts – which is super helpful given SiriusXM’s occasional loss of signal when you’re driving in hilly/mountainous areas with dense tree coverage.

The USB connector ports – and the Qi wireless charging pad for your phone – are mounted conveniently ahead of the gear selector, where you can see (and easily access) them. 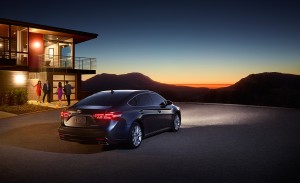 You can get (Limited trims) ventilated seats (in addition to heated seats) but you can’ t get a heated steering wheel – one of the few omissions of Lexus-like amenities. Another is the panorama roof – which there isn’t.

If you’re looking for a fancier Camry – or maybe a less pricey Lexus ES350 –  an Avalon could be just the ticket.