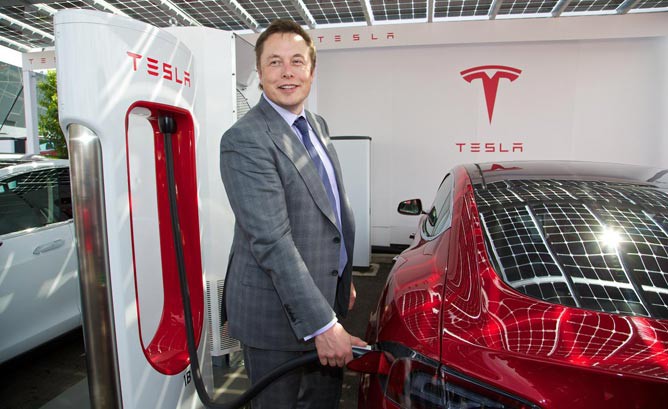 It’s depressing when even Jalopnik – a car site that’s supposed to be into cars – throws a bukakke party for the new Tesla 3.

Which is a car in the same way that this is an airplane:

Elon Musk’s latest four-wheeled exercise in rent-seeking will reportedly be “sold” (fundamentally dishonest word; I’ll explain) for about $35,000 to start. Which is a “deal” – sort of – when compared with the other Tesla, which has a starting price just under $70k.

Jalopnik writes (if it can be described as such):

The “writer” (sorry, I can’t help myself) then goes on to abuse the “shit talkers” (that’d be me) who “howl all day” about the electric Edsel’s range and recharge issues – which have not been solved. 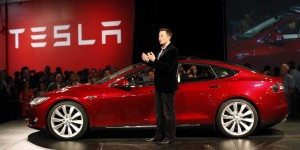 As per usual, this article – pretty much all the articles – parrot Tesla’s press kit talking points about the car’s potential range, which is “up to” 300 miles. Well, sure. You might also earn “up to” $100,000 a month working from home, using our multi-level marketing scam. Just call 1-800-BULLSHIT and sign up now.

It amazes that so many people still fall for the “up to” schtick.

The editorial laziness, the engineering ignorance – or the bought-and-paid-for shilling is truly spectacular.

Ok, sure. The car might indeed go “up to” 300 miles… if you live in a nice warm place like southern California…. if you drive on mostly flat roads and like a Clover (gimpy acceleration, stick to within a few MPH of the speed limit) and avoid using electrically powered accessories like the headlights and heater and air conditioning. 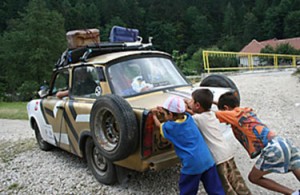 Granted, it’s not sexy. But it’s also not subsidized.

If, however, you live in a place that has hills … or gets cold… or you like to use the heat and headlights… or you drive your $35,000 to start “luxury performance” electric car in an un-Clover manner… well, your mileage will vary.

Because I am shilling for Big Oil, cannot embrace new technology (which is actually very old technology).

Well, except that the Jalopnik flak inadvertently agrees with me. He writes:

“One thing odd tick (sic) we did encounter, however, is what happens to a Tesla battery if you leave it unplugged overnight… on a cold night, you can see a drop of up to 40 miles from where you left it.”

So, you’ve got a $35,000 car that loses 40 miles of range just because you left it sitting. Isn’t that like having an old gas-engined jalopy with a pinhole leak in its gas tank? Check King Soopers Ad and Piggly Wiggly Ad. Except, of course, you didn’t have to spend $35,000 on the leaky jalopy. And even if the tank leaks dry, you can still pour in a 5 gallon jug of gas in about 5 minutes or less.

Which brings me to the Other Thing: 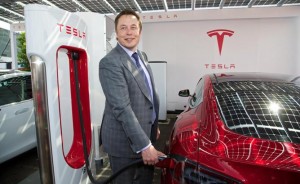 The mass market acceptance of the new Tesla will depend on a whole new rent-seeking project:

The establishment of a network of Tesla “supercharger” fast-charging stations all over the country.

Guess who’s gonna pay for that, too?

And I guess it’s just more “shit-talking” on my part to point out the hilarity of describing as “fast” a recharge time that’s still “about half an hour or so.”

I’m the “shit talker” for boggling at the idea that people are going to be happy about waiting around for half an hour to forty-five minutes to get back on the road again?

We’re talking waits-to-get-going that are 150 times the typical 5 minute refuel with a gas-engined car. And which you’ll have to do more often because the Tesla doesn’t go nearly as far on a full charge as a gas-engined car goes on a full tank.  (I’m a car journalist; the car companies send me a new car to test drive each week. But only rarely an electric car. Why? Because they can’t make the 250 mile trip in a day, unless they’re piggybacked down here on a flatbed.)

Yeah, sure. If you don’t count the elsewhere emissions – including that dread gas, C02 – emanating from the utility plants that generate the electricity the Tesla runs on. Or the earth-rape for the rare metals needed for the cars’ battery packs, not to mention the emissions produced manufacturing them. 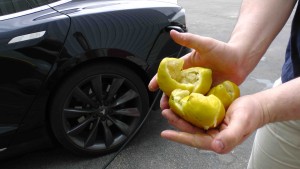 The one potentially positive aspect of this story is that if Elon Musk can line up enough rich suckers to buy the “inexpensive” Model 3, it will be slightly harder for him to dig his hands into your pockets and mine (via Uncle) to “help” him – via subsidies – manufacture his crony capitalist conveyances.

But that’s about as likely to happen as the Chevy Volt becoming a best-seller.

And in defense of the Volt, it could at least make a 400 mile road trip without 45 minute pit stops to recharge every 150 miles or so. Because it carried along a portable gas-fired generator (an internal combustion engine), which made it a serviceable car, albeit a grossly overpriced one.

The Tesla 3 has no such lifeline. When it runs out juice, you’ve run out of luck.