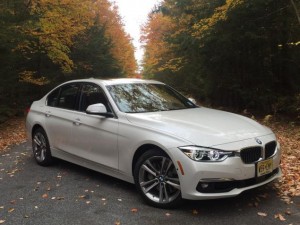 Why advertise what you’re up to? I mean, if you plan to actually do it as opposed to just thinking about doing it…?

Well, maybe a white wrapper… like this one. This innocent-looking all-white BMW 340i they sent me.

It’s an upmarket sedan, obviously. But that is nothing uncommon nowadays. What’s not obvious – what’s not made a huge issue of – is what this particular BMW can do.

Zero to 60 in in the mid-fours, for instance.

That is hot enough to singe a Hellcat. 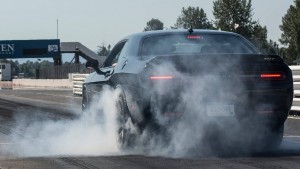 Only about half a second’s difference between the two at the end of the run.

This BMW only has half that.

Well, so they say. 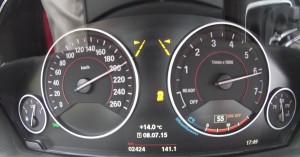 It is said BMW under-rates the power output of its engines.

In a straight line or otherwise.

The 3 is BMW’s mid-sized luxury-sport sedan/wagon; the subject of this review will be the 340i sedan – which is the new name for what used to be the 335i sedan. The raise-you-five actually raises you 20 (horsepower) … at least … vs. last year. 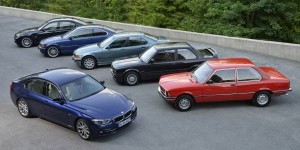 And much ups the car’s performance.

This is less than immediate-obvious cross shops like the Benz C450 AMG (which starts at $50,800).

And the Three gives you also more performance. 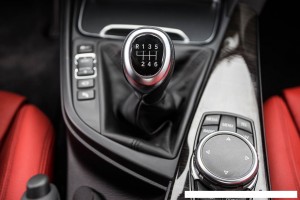 You also get a choice the Benz does not offer. To go automatic… or go manual.

The Benz (and another possible cross-shop, the much-less-speedy but slightly less expensive Lexus IS350) are automatic-only.

And so, incidentally, is the Hellcat.

While the turbo four-powered 320i and mid-range 328i remain functionally the same as last  year – and keep their designations – the six cylinder-powered 335i becomes the 340i. Engine output is increased by a supposed 20 hp – from an advertised 300 to 320. 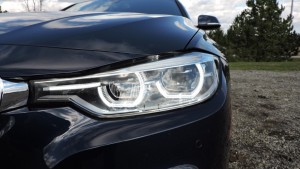 The new 340i also comes standard with additional amenities, including a 16 speaker ultra-premium Harman-Kardon audio system and LED headlights (these are available optionally with the 320i and 328i).

All 2016 Threes get minor exterior and interior styling tweaks and an updated suite of apps, including BMW’s Online with MyInfo system – which pipes real-time news and info directly into the car.

Not an obvious ripper.

You don’t have to buy the automatic – or AWD – to get the ripper engine.

Gives up nothing on luxury – or tech – to less-quick (and more expensive) rivals like the Benz C450 AMG. 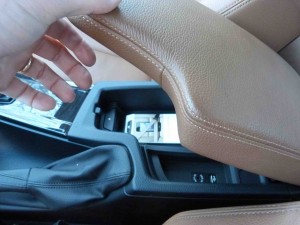 Easy to spend Hellcat money on one (my test car’s sticker was about $50 short of $60k).

Easy to get yourself into real trouble with one.

BMW was one of the first car companies to buy whole hog into small engines made big when needed via turbocharging. Most Threes (the 320i and the 328i) are powered by a 2.0 liter four that makes – respectively – 180 and 240 hp. 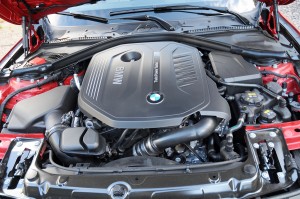 Now, that’s not a huge bump – from last year to this year. But here’s where things get interesting.

So, something’s fishy… in a very good way. 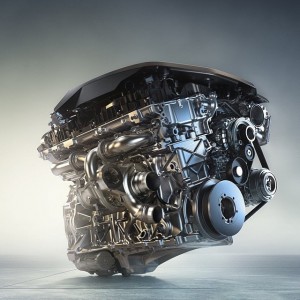 Also, good – spectacular, really – is the 340i’s potentially near-economy car fuel economy: 22 city and 33 with the optional eight-speed automatic (RWD version). Those numbers would have looked good on a Civic not all that long ago – and even today, they’re not all that far from the numbers delivered by a new Civic.

Which will not explode to 60 in under 5 seconds, either.

You lose a few MPGs if you stick with the standard six-speed manual transmission: 20 city, 30 highway. But these are still impressive numbers given the other number.

Context: The Dodge Hellcat – which can explode even more explosively to 60 (in just 3.9 seconds) also has an appetite for gazzuline that would appall Mad Max: 13 city, 22 highway.

Remember: The Hellcat’s only about half a second quicker to 60. 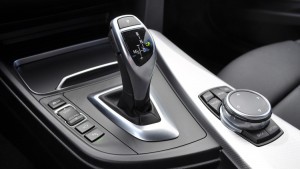 But the Hellcat has the excuse of being a full-sized lunker. The BMW is mid-sized. It’s also a sport sedan whereas the Dodge is what Arnold in his Terminator prime would have been if he’d been a car.

How about the direct cross-shops?

The obvious counterpoint is the C450 AMG version of the Benz C-Class sedan. It’s also got a turbocharged six (though a V6 instead of an inline six) and its 362 hp sounds like a winner. But the Benz is hobbled by a much higher curb weight – 3,748 lbs. – and it comes only with an automatic transmission and only with all-wheel-drive. 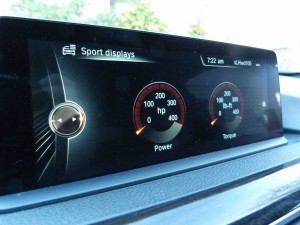 Don’t mess with a Hellcat in that one. 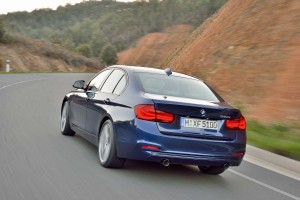 Ever drive an old muscle car with lots of engine – and a loose throttle return spring? The 340i’s accelerator pedal is …sensitive. It translates intention into action instantly.

And there’s a lot of it.

Or even half a second.

The six has the double advantage of six cylinders and turbocharging – which is torque plus more torque. A bigger engine is already at an advantage, torque-wise. Adding a turbo not only boosts the total torque output, it makes the torque swell sooner. The six’s 330 ft.-lbs. (comparable to the torque output of a 4-5-ish liter V8) peaks at 1,380 RPM. 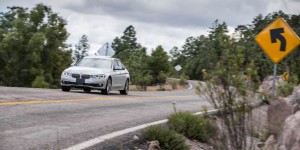 What that means is sucker punch acceleration … the guy in the lane next to you being the sucker.

Even if he happens to have a Hellcat. How’s your reaction time? If it’s a little better than his, if you get The Drop on him – you’ve got him. Maybe you won’t walk away from him. But you’ll annoy him severely by preventing him from walking away from you.

The hilarious thing is all of them look like they’d be quicker – the AMG Benz with its fierce squat and powder-coated brake calipers; the Lexus with its skin stretched tight over bulging flanks like an Amazon Anaconda squeezing the life out of a deer. 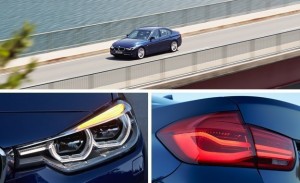 And – numbers aside – the BMW  is more emotionally satisfying. The unique pitch of its straight six engine; the opportunity to shift for yourself. Hoon-Friendly electronics (the Lexus’ and the Benz’s aren’t; Big Momma steps in early and often).

Select Sport+ mode and throttle tip in becomes even more sensitive; if you have the automatic, shifts firm up, the adjustable dampers cinch down – and you are ready to do Very Illegal Things and – unlike the Hellcat pilot – probably get away with it.

You will definitely have to stop for gas (if not cops) less often. I love the Hellcat but even the advertised 13 MPG (city) is as optimistic as hoping for snow in Phoenix. It’s possible, maybe. If you drive it like Al Gore hypermiling a Prius… but then, what’s the point?

Which helps when the road bends. 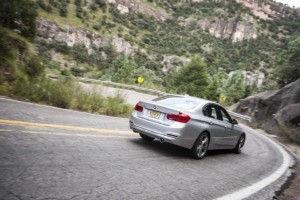 Not that either the Benz or the IS (or the Hellcat) haven’t got lots of lateral grip.

The BMW just feels lighter on its feet – because it is.

You can one-finger (well, one hand) it around the apexes. It takes more effort to do the same in the others, especially the Mercedes. The Lexus IS is better in this respect (maybe in part because it is only slightly heavier than the BMW) but it doesn’t pull as hard coming out of the apexes as the BMW does.

Note also that Lexus downgrades you to a six-speed automatic if you want the AWD.

And the RWD version comes only with the eight-speed automatic. 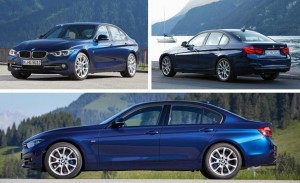 It’s said that imitation is the most sincere form of flattery. If so, BMW should be very flattered.

Take a look at almost any current (or recent) mid-sized sedan… luxury-branded or not. The overall shape is… familiar. In some details (the shape of the rear quarter glass, for instance) the flattery is so enthusiastic it’s like the difference between McDonald’s and McDowell’s (for those who remember this Coming to America reference).

If you’re running from Roscoe, all you really need to do is find a large parking lot – any shopping mall will do – and just… park it. You are one of many. No, officer, it wasn’t me back there… I’ve just been doing some shopping… you have me confused with someone else. 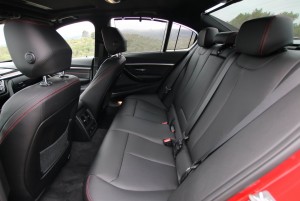 Meanwhile, the Benz C450 and even the Lexus IS350 stand out a little more – and that makes them a riskier proposition for risky business.

But illegalities aside, let’s consider practicalities – a criteria not usually associated with BMW sport sedans.

And yet, it is the more practical car of this trifecta. 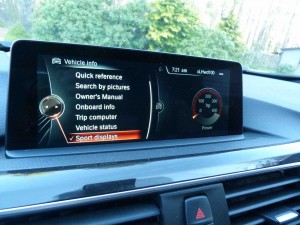 The Benz C has about the same room in the backseat (slightly more legroom, 35.2 inches; slightly less headroom 37.1 inches) but – in power/performance-comparable trim (C450 AMG) it is priced $5k higher to start – no small change even at this price point. You could buy the six-speeded 340i and the Track Handling package and still be out the door with a decent bit of money left over for track day fees and tires. 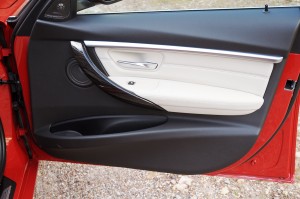 Though it is a new and fully modern car in terms of the technology and features it has – including an LCD dynamometer showing you horsepower and torque output as well as peak hp/torque achieved, the ability to use your phone to lock the car remotely or turn on the climate control – it is also happily retro in some other areas. The door tops, for instance, are low enough that you can almost rest your elbow on them with the window glass rolled down. Most modern cars have doors so high you feel as though you’re sitting way down low, bathtub-style.

In addition tot he claustrophobia factor, this also makes it harder to see to your left and right… in those other cars.

Not in the Three. 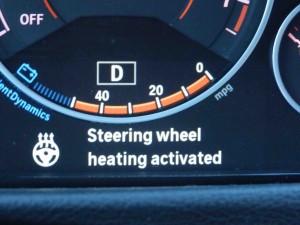 Also “period” (in a good way) is the main gauge cluster, which consists of large circular/analog speedometer and tach, with traditional BMW fonts. To the right of this is a nearly 9 inch LCD display (the base 320i and 328i come with a smaller 6.5 inch screen) which is controlled via a rotary/push knob and secondary buttons mounted just behind the gear shifter. Which – if you opt for the automatic – is a fully drive-by-wire toggle-style shifter that you tap forward and back to engage the ranges.

Everyone has heated seats now. But a heated steering wheel – that’s money. Order the Cold Weather package and you’ll never regret it. 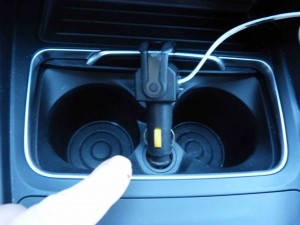 In a car like this, a radar detector is don’t-leave-home-without-it. The problem is the 12V power point is both awkwardly located in between the two round holes for drink cups located toward the front of the center console – and it’s too shallow to provide a positive connection.

My V1 would go dark without my noticing it – or because a coffee cup jostled the pigtail connector.

It didn’t happen to me during my test drive, but it’s inevitable that – due to the location of the power point in between the places where you put drink cups – there will also be spillage.

Which will further erode the connection. 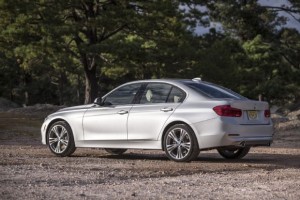 The center console armrest is fine, but there’s next to no storage underneath it.

While the Three has plenty of room for legs and shoulders and heads, covered cubbies are insufficient.

These are minor irritants, though, when the package itself is considered.

I love this car. It’s just the ticket for doing the things you’d be inclined to do with a Hellcat, but with more discretion  – and for about $20k less, too.

Just don’t buy a red one…