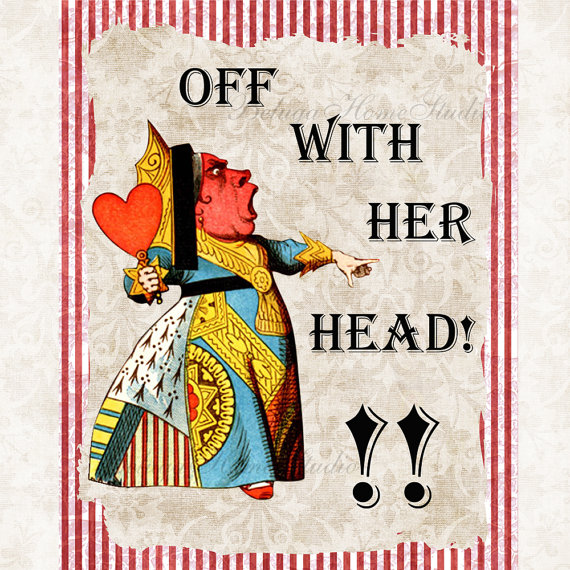 Sentence first, verdict afterward! – the hysterical shriek of the red queen in Lewis Carrol’s Alice in Wonderland. It’s great fiction, but an ugly reality when it comes to dealing with the IRS. 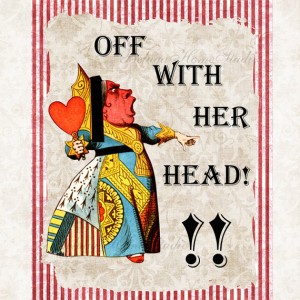 Many people are unaware that they need not be convicted of anything for the IRS to simply seize their property – bank accounts, real estate, etc.

Suspicion alone – founded or unfounded – is all it takes.

You are presumed guilty until you prove yourself innocent.

You can either write a check for whatever the IRS claims you “owe” and hope that satisfies them. Or risk  punitive actions such as penalties and fines heaped on top of that and the possibility of them seizing everything you own in the meanwhile – while also paying for a lawyer out of your own pocket to defend yourself.

This puts tremendous, frightening – and largely unaccountable – power in the hands of a federal agency not known for playing nice.

You may recall the recent revelations that the IRS targeted conservative groups (and individuals) whose politics it didn’t like for special handling – as the Germans used to call it.

You may not have heard that the IRS has been farming out its auditing investigations to private (for-profit) law firms. These law firms have every incentive to take their time (billable hours) and also to go after people aggressively, whether there is any legitimate (legal) reason to do so or not.

The target – for now – is Microsoft – but it could be anyone, once the principle is established.

Putting tax investigations into the hands of private, for-profit accounting firms is not unlike putting traffic enforcement in the hands of private, for-profit red light camera companies. In both cases, the motivation is money – not due process. It’s a well-known scandal that red light camera “vendors” deliberately shortened yellow signal intervals so as to increase the number of people who “ran” red lights – and could be dunned for money.

How eager do you suppose private tax-investigators would be to ferret out supposed “violations” of the tax code?

And the potential for abuse is much higher because it is much harder to hold private entities accountable.

After all, you can’t vote them out.

The IRS also alters  – at its whim – the statute of limitations for prosecuting certain tax cases.  Bet you hadn’t heard about that, either.

Ohio Sen. Rob Portman has introduced legislation to reign in some of these excesses – in particular, the IRS’ use of mercenary private sector tax lawyers to do its work. If the bill passes, practice would be – should be – explicitly forbidden.

Taxpayers would also be given the legal right to have their cases heard by an Appeals board before the matter goes to tax court. This would take some of the pressure off people accused by IRS investigators of owing money prior to the IRS having proved they do, in fact, owe the government money.

Punishing people before they’ve even had a chance to formally defend themselves against charges levied against them – let alone been convicted of anything – is profoundly at odds with everything America is supposed to be about. It smacks of banana republic kleptocracies where if they want your money, they’ll just take your money. That ought to repel us, as Americans. If we’ve broken the law, hold us accountable. But not before it’s been demonstrated that we have, in fact, broken the law.

The IRS should also have to respect the statute of limitations – something  that is a given when it comes to any other criminal investigation. Shouldn’t the same principle apply to tax law?

Fairness requires that the law be clear – and clearly defined. Changing the law after the fact (ex post facto laws) was one of the “long train of abuses” cited by Jefferson when he wrote the Declaration of Independence.

No one likes paying taxes – and the rightness of having to pay them at all is something that can be legitimately be debated. But it’s not debatable – or shouldn’t be – that no one should be held responsible for things they’ve merely been accused of doing. Nor be denied the right to appeal. Nor be charged with a crime after the statute of limitations has expired.

That’s for Alice in Wonderland and the Red Queen.