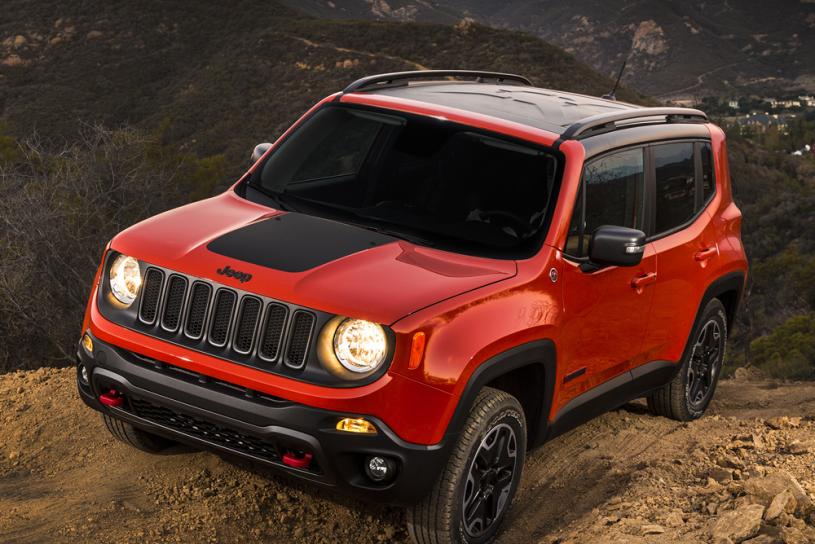 I was suspicious, too. 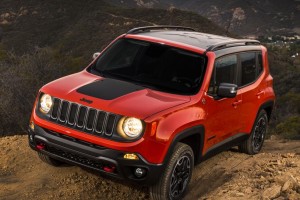 Whoops, I done spilled the beans.

But it’s ok. Though the Jeep Renegade is related to Fiats (500L and X) it isn’t just a re-bodied and rebadged Fiat. 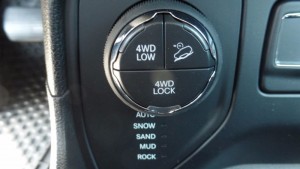 And the “Trail-rated” stuff?

Is that really legit?

Can you take this thing off road  – and come back without an assist from a real 4×4?

Surprisingly, the answer is… yes, you can.

About the only thing this thing has trouble leaving behind is a gas station… . 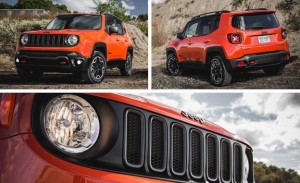 The Renegade name was originally used back in the ‘70s when it denoted a trim/equipment package available as an option on the CJ (“Civilian Jeep”) series, the ancestor of today’s Wrangler.

The current Renegade is a model in its own right – and also very differently laid out than either the classic CJ or the current Wrangler – both of which are based on rear-drive/part-time 4WD layouts similar to what you’d get in a truck while the Renegade is based on a  FWD/part-time AWD layout that’s similar to the layout of most current cars.

However – in the Renegade Trailhawk – it’s no ordinary AWD system. Because it does have Low range gearing. Just without the two-speed transfer case (wait a minute and I’ll spill).

It is also the first Jeep vehicle with Italian roots. 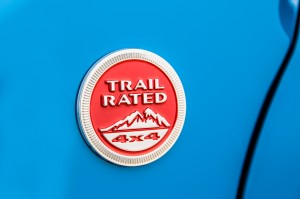 The Renegade and the Fiat 500L and X are corporate kin – and share engines as well as some of their under-the-skin chassis and other components.

All are compact-sized, five-door/hatchback crossover SUVs.

However, the Renegade – being a Jeep – offers more off-pavement capability and the Trailhawk version has real-deal off-road capability, including a gear-reduction feature that works like a two-speed transfer case’s 4WD Low range. It also comes with multiple driver-selectable Terrain modes – very similar to the set-up you’d find in much more expensive (and very real-deal) SUVs like Land Rovers. 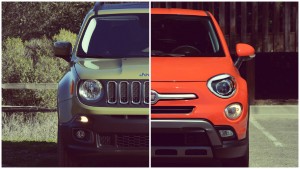 While the regular Renegade competes with other small crossovers like the Subaru Crosstrek ($21,595 to start) the only other small-ish SUVs that can out-tough the Renegade when the mud gets deep and the trail gets steep are models like the Land Rover Discovery – which starts at $37,455 – and the Renegade’s in-house competition, the Wrangler Rubicon – which has even more capability (including Dana 44 axles fore and aft) but also carries a Land Rover-esque starting price of $36,995.

That leaves the Renegade Trailhawk as the bargain-priced rock-crawler of the bunch. 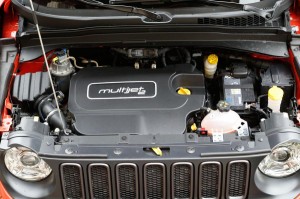 For 2017, the Renegade Trailhawk and Limited trims come standard with a built-in (and removable) cargo light and there’s a new upgrade audio rig and standard automatic wipers.

Unfortunately, the diesel engines (yes, plural) that are available in Renegades sold in the UK  and Europe will not be offered here.

Not even one of them.

The problem being it’s hard to make a diesel U.S.-emissions compliant and reasonably priced. This is why VW – the only company that sold them – “cheated.”

And it’s why there are no longer any affordable diesel-powered new cars available for sale in the United States. From VW or anyone else.

The Mr. Universe of its class. Nothing else offers this much off-road capability (or towing capacity) for this modest a price.

More back seat (and cargo) room than its Italian cousins.

More passenger room than light-duty crossovers like the Crosstrek. 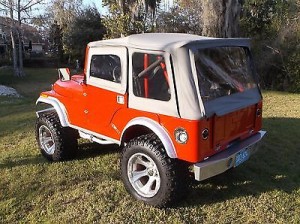 Automatic-only (Trailhawks; other Renegades – those with the standard 1.4 liter Fiat-sourced engine – can be had with a manual).

Gas engine-only. No diesels (and no almost 50 MPG) for us.

The Trailhawk – being heavier than other Renegades because of its heavier-duty equipment and mandatory AWD system (which Jeep calls “4WD” … which is true… but also slightly misleading; bear with and I’ll explain) comes only with the larger 2.4 liter four cylinder gas-burning engine that’s optional in the lesser trims. 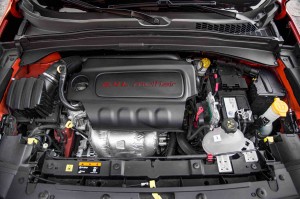 This is so because the base 1.4 engine is turbocharged while the Trailhawk’s 2.4 liter engine isn’t. The turbo boosts the torque output of the littler engine – and it’s kind of odd that Jeep decided not to boost the torque of the larger engine, especially in the Trailhawk – which could use the assist.

Though it’s not a big vehicle, it is a heavy one – almost 3,600 lbs. empty. That power-to-weight ratio is not very good.

Not surprisingly, it takes a while to get going – about 10 seconds to 60 – and that’s best case, with just the driver and not loaded with passengers and stuff.

Loaded, you don’t want to know. 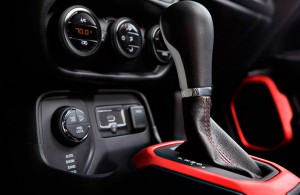 The advertised mileage – 21 city, 29 highway – sounds ok, but I only averaged 22.1 during my weeklong test drive.

Wait till you hear what the diesel we can’t have gets… .

A nine-speed automatic is standard equipment. In the Trailhawk and – unique to this model – it has a gear-reduction feature for low-speed slogging through mud or climbing/descending steep grades. It effectively mimics the 4WD Low range of a traditional, truck-type 4WD system.

Which the Renegade doesn’t have.

It has a different system that does similar things. 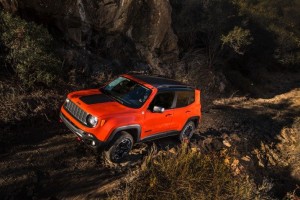 Like a truck-type system, the Jeep’s system can be engaged and disengaged. The difference is that when you disengage the Renegade’s “4WD” system, the engine’s power goes to the front wheels. In the Wrangler and other SUVs that have truck-type 4WD, when you shift into 2WD, it’s the rear wheels that are powered. Historically-semantically, the truck-type systems have been referred to as “4WD” while the FWD-based systems have been called “AWD.” Either way all four wheels are powered.

The other functional difference is that the Trailhawk does not have a separate two-speed transfer case, so there’s no lever to pull up to engage/disengage 4WD low. Instead, you turn a knob to change Terrain modes. Rock Crawl mode engages the gear reduction feature. You can also lock the power-split 50-50 (front to rear).

Capability almost always comes with compromise – especially when cost is also a factor. 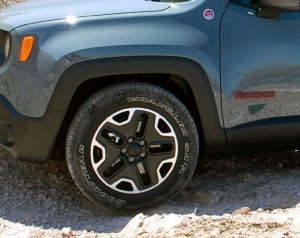 What you’re looking at here is a vehicle that can go places none of its same-priced (or even close-in-price) competitors can and which can do things they can’t (such as tow a small trailer) but which is also a bit lacking when it comes to its guns.

And which also drinks a lot of gas.

The lack of guns could be remedied by adding a turbo. Like the Land Rover Discovery – which has a turbocharged 2.0 liter engine that makes 240 hp (and 250 ft.-lbs. of torque) and so gets to 60 in about 7.6 seconds, almost three seconds sooner than the Trailhawk can deliver. The Discovery also has passing power, which the Trailhawk doesn’t. You will have to adjust your driving style to deal with this. Become adroit at estimating time/distance relationships; learning to get the drop on those you plan to pass.

If not, you probably won’t.

The Trailhawk has no reserve power to call up if a Situation arises – like another car cresting a rise in the opposite lane, with you still trying to finish your slow-motion pass. 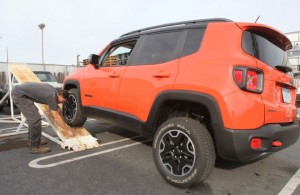 But to be fair, the same was equally true of the old CJ … which had a V8.  Also, the Trailhawk costs $10k less than a Land Rover Discovery (turbocharged engines – and prestige-brand SUVs -tend to be expensive) or a Wrangler Rubicon.

So, you get what you paid for.

Which is probably 85 percent or so of the Disco’s ad Rubicon’s real-deal capability. You might not pass many cars on the road, but when the road ends, not many cars (or even SUVs) will pass – or even be able to follow – you.

Until you run of of gas. With just a 12.7 gallon tank and running maybe 22.1 MPG, that happens soon and frequently.

It’s a got-damned shame that we’re denied the 2.0 liter turbodiesel that’s available in Renegades everywhere except the United States. It has the turbo – and the torque – that are just the ticket for a heavy SUV that needs down-low grunt. And wait until you hear about its mileage… .

Thank Uncle for that. 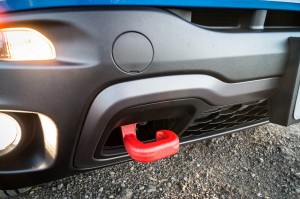 The Renegade shares its underthings (most of them) with the Fiat 500L and X, but all the exterior panels are different.  There’s a Wrangler-esque vertical bar grille and old-school-looking round headlights (but without the old school sealed beam suckiness) and “Jeepy” tail-lights out back, with depressed Xs in them that are supposed to remind you of military Jeep gas cans.

Trailhawks differ from regular Renegades, too. You get the “trail rated” badges (naturally) and those three cast-iron tow hooks (two up front, one in the back) which are powder coated a contrast color to make them stand out. Other unique-to-the-Trailhawk items include the hood’s center section, which is left matte (flat) black and red anodized interior trim plates with matching stitching for the seats.

You also get a real (full-size) spare tire – not a donut – which is a potential life-saver (or at least, a tow truck-avoider) off road, as well as an upgraded LCD display, which is Chrysler’s UConnect system (used in pretty much all Chrysler products) and it’s top-drawer. Nice looking, large graphics, easy to use. 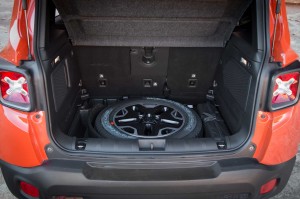 The upside is more-than-usual (and lots for a vehicle this size) headroom and shoulder room in both rows: 41.1 inches/40.5 inches and 55.9 inches/55.1 inches, respectively. I’m six feet three and had to jack the driver’s seat up several notches to not feel like a member of the Lollipop Guild.

In the Crosstrek, you’ve got 39.8 inches of headroom up front (ok) and 37.7 in the rear (not so ok). It’s also a tighter squeeze, sideways-speaking. The Subaru’s got two inches less shoulder room in the back seat (53.1 inches). 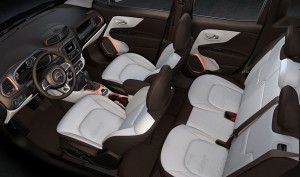 Both have about the same second row legroom, though: 35.1 inches for the Jeep and 35.4 for the Crosstrek. Both are ok in this department. (If you want more than ok as far as backseat legroom, you could look at the similar in shape Kia Soul – which has 39.1 inches of legroom in its second row – but the front-wheel-drive-only Kia isn’t even farm league as far as off-road capability goes.)

Interestingly, the Jeep’s got more second row legroom than its Italian cousin, the FIat 500X (34.8 inches) as well as more carago capacity (50.8 cubic feet vs. 32 cubic feet for the Fiat. Which also lacks the off-road capabilities of its American cousin.

It’d be unreasonable to expect a real-deal off-roader to be easy on gas – or sports car quick. That said, it sucks that the turbodiesels – two of them! –  Jeep can sell to the Europeans isn’t Uncle-approved for sale to us. 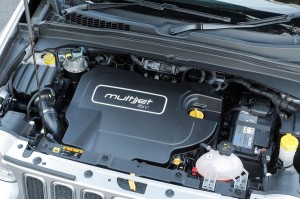 Here’s what they get but we don’t:

How ‘bout them apples?

Interestingly, the 2.4 liter gas-sucker that’s all we get isn’t available at all in European-spec Renegades. Because it sucks, literally.

Because over there, gas costs about four times per gallon what it costs us. 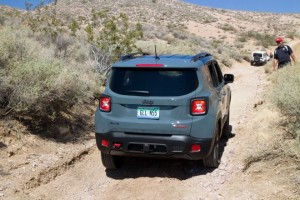 The optional MySky roof is neat and so is the Trailhawk’s small footprint and relatively low price. It reminds me of the old Chevy Tracker GM sold eons ago – which was also little and fairly cheap to buy but quite capable and (most important of all) a bunch of fun.

It’s Pravda (truth). Those “Trail Rated” badges are not a con. This Jeep may not have a two-speed transfer case but that doesn’t mean it’s not a proper Jeep – and can go places nothing else in its price range should even think about.