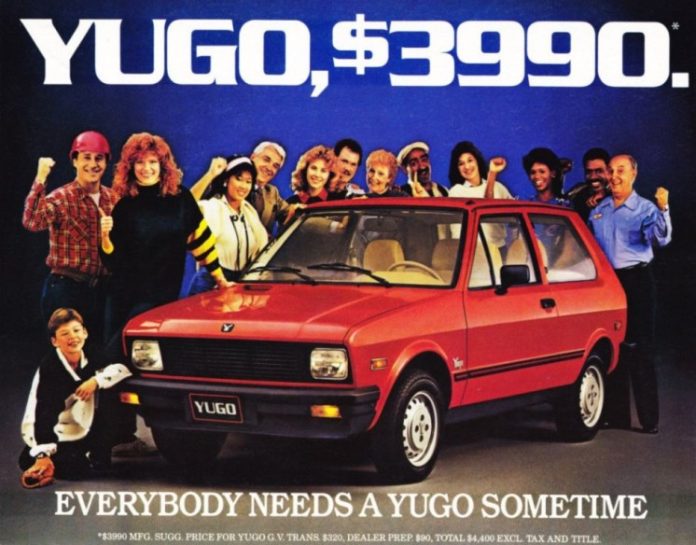 The late and very great Brock Yates coined the term.

They don’t make them anymore – not really. Modern economy cars are not shitboxes.

A shitbox is something like an ’80s-era Ford Escort or – even better – a Hyundai Excel or Yugo.

The Chevette is a contender. A Citation even more so.

Things on four wheels with the hearts of worn-out lawnmowers and embarrassing names like Champ and Protege and Aspire (the car that hopes one day to be a car).

Zero to 60 times in the 15-30 second range, with top speeds around 85 mph. God help you if you hit something. Or something hit you. Three-speed automatics and four-speed manuals, no overdrive. Doors that closed with less solidity than the bi-fold metal dividers you find in single-wides. A speedometer and a gas gauge, nothing more.

They leaked; rust began to bubble before the warranty expired. They sputtered and stalled. They made pathetic sounds and looked even more so.

The least of them can reach 60 mph in about 9  seconds and most will do at least 115 on top, which is more speed than most late ’70s muscle cars had.

They come standard with air conditioning and are fitted out with a complete set of instruments and almost always not-half-bad stereo rig – usually with a CD player and four speakers.

They are far from shitty – or even boxy.

Some are nice enough in their own right that you’d think about buying one because you like it, not because you can’t afford something better.

You have to be at least in your mid-30s today to understand how utterly the landscape has changed. Old enough to have driven or at least seen a Datsun B210, a Toyota Starlet, Subaru Justy, an early K-car or Plymouth Champ. 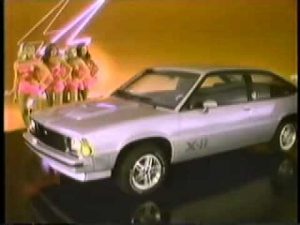 Thirteen inch steel wheels and four lug hubs and the cheapest, skinniest tires this side of a Pee Wee Herman’s bicycle. So underpowered that top speed runs and 0-60 times were both more or less the same things. The finest Soviet bloc materials on the inside; carpets if you were lucky.

All the crashworthiness of  a brightly painted cardboard refrigerator container. If you hit something, you’d feel it. Hit a tree , and it would be the very last thing you’d feel.

But they did have their charms.

With early onset tire squeal came an opportunity to hone your driving skills.

Anyone who spent some seat time parking brake U-turning a Starlet has one up on a driver who hasn’t had the experience. Without ABS and with barely marginal stopping power, one learned all about following distances and planning ahead.

You kept sweats and other warm extra clothes in the trunk, too – because either the heat didn’t work or the car was so drafty it didn’t matter if it did. In summer, you were shirtless – layers of electrical tape keeping the seat springs from jabbing you in the balls too much.

A friend in high school had an especially wretched little Subaru. Reverse crapped out, but the forward gears still worked. So we would Fred Flintstone it out of the 7-11 parking lot.

But as much as we cursed it, it gave us lots of story fodder.

I can’t think of a single modern economy car that’s memorable in the way the old stuff was. They rarely break down and none of them are dangerous. Few are unpleasant to drive. They have AC, adequate stereos. Decent seats. More and more of them either have or offer GPS and satellite radio. 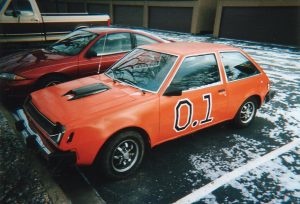 Driving cross-country in one would not be like crossing the Atlantic in the 16th century aboard a rickety, scurvy laden Golden Hind.

But I doubt we’ll have anything much to say about them 20 years from now – and that tells me we’re the poorer for it, somehow. Especially today’s kids. The Shitbox Experience has come and gone like real Coke with cane sugar, lawn darts and catalytic converter test pipes.

Brock would grok this.