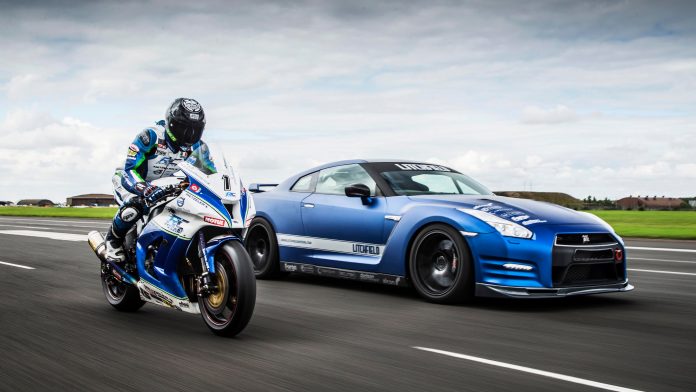 Lots of reasons to love motorcycles, but the economics always make me smile. For less than the cost of the least expensive new car you could go faster than you could in almost any exotic car. Park it in your apartment, if you like.

And get better gas mileage, too.

That’s my kind of equality. 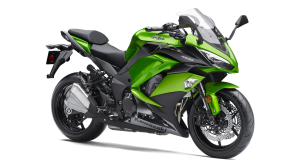 Guess which is the quicker?

It’s not the Versa.

It’s not even close.

And the Kawasaki is just beginning to stretch its legs. Keep the throttle rotated and it will achieve speeds few cars are capable of reaching – 170 plus, no fuss – and the bike can reach them a lot sooner, making them more accessible. A fast bike can jump from 100 to 150 in the blink of an eye – literally. Very few cars can do that. They need room, even the really strong ones. 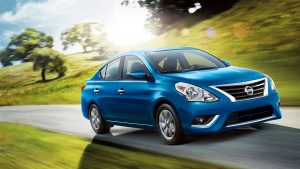 Because Power to Weight.

The Ninja’s power-to-weight ratio outclasses a new Corvette – which has a 460 hp V8 (nearly four times the power of the Kawasaki’s four) but it weighs about 3,300 pounds, which takes some of the edge off all that power.

A Corvette will not wheelie.

It also beats the Corvette to 60 and is quicker through the quarter mile. On top, it’s closer – because the car has an aerodynamic advantage over the bike. But you can’t have everything – and to have a Corvette, you’ll have to have $55,450. Which pretty much rules out most people. 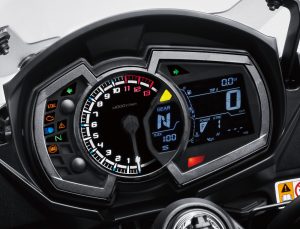 But for the price of a Versa, you could buy that Ninja. And almost anyone can afford a Versa.

Which, by the way, only manages 31 MPG in city driving and 39 on the highway. Despite its ferocious performance capabilities, the bike does better: 40-45 MPG.

It is like having your Prius – and not driving it, too.

Or, having to find a spot to park it.

A motorcycle fits almost anywhere, including an apartment. Get a ground level unit and roll your steed into the living room, where you can admire it. You will never have to worry about leaving it outside.

Bikes are also much easier to maintain than cars, because most of the usual maintenance things are accessible. You don’t need a floor jack or a lift to change the oil, for instance – and very few tools. There are no belts on a bike (unless it is a big cruiser, with a belt-drive to the rear wheel – but that’s a different thing) and most don’t need much beyond a new chain/sprockets every now and then and a set of new tires – of which there are just two and even if they are very high-performance tires, their cost to replace is much less than the cost per tire of high-performance car tires. Maybe $150 each for Ninja tires – which is cheap for a an ultra-performance tire. Go price one of the Corvette’s four tires, to see what I mean. 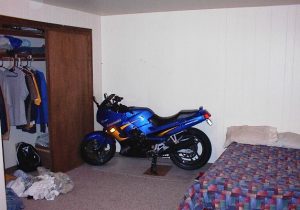 There is, of course, a catch. There is always a catch.

It is the cost to insure a bike. Especially a fast one. More so a new one. It is pretty typical for a policy on a bike like the Ninja 1000 to run $2,000 annually or even more (if you’re young and male).

But, there is an end run. Several of them, actually.

First, avoid buying the bike new. Buy it when it’s a year or so old and pay cash for it. Bikes depreciate quickly, so that $12,199 new Ninja 1000 will cost you maybe $8,000 or so a year away from new. Invest the difference in insurance. And do not buy full coverage; just the bare minimum liability. This is not stupid. If you crash, the cost of plastic – the bike’s bodywork – is so high they’ll total the bike anyhow. But won’t refund the shekels you spent for “coverage.” 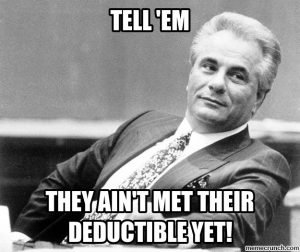 But the best end run is to buy something slightly older, without the reputation for wild living. The Ninja is a known offender. It is the name as much as what the bike can do that results in insurance rape. But my ZRX1200 – also a Kawasaki sport bike and with an even bigger engine than the Ninja and more power (141 at the wheel) only costs me about $75 every six months to cover.

Because it is considered – according to the insurance mafia’s arbitrary classification system – a “standard” (or “naked”) bike. The absence of plastic fairing is all the difference.

I have another bike – much older – that is an even cheaper thrill. Bought it for $2,000 and redid the engine to make 130-ish hp (more than the new Ninja) for about $2,000 in parts plus my labor. That’s less than half the cost of a new Versa and barely a down payment on a Corvette.

Plus, the insurance mafia regards it calmly as just an old bike – and the cost to insure it is not even half what I pay to cover the ZRX.

There are still a few ways to game the system – and enjoy what’s been mostly taken away from us when it comes to things on four wheels.

Just try to keep it quiet.

No need to unduly alarm the Clovers.