When you hear “minivan,” probably the first thing that pops to mind is not Mercedes.

But in Europe, Benzes are dominant in the commercial/work fleet – everything from taxis to buses to other types of haulers.

For about the same as you’d pay to drive home in  a Dodge minivan – and a lot less than you’d pay for a Chrysler minivan – you could be driving a Mercedes minivan. And not just that. The Metris is a rear-wheel-drive minivan… 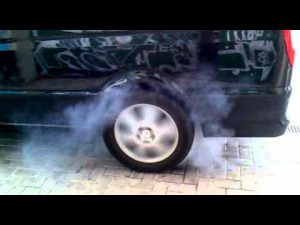 It’s the only minivan that can do a burnout.

A minivan – same basic silhouette and about the same overall dimensions as a Chrysler Pacifica, Toyota Sienna or similar full-size minivan – but unlike them, the Metris does not have its engine mounted sideways and powering the wrong wheels.

If, that is, you like to smoke the tires!

Or, pull anything substantial. 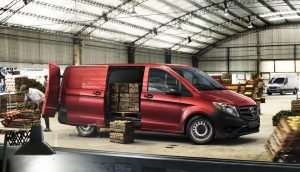 Base price for the Worker/Cargo version of the Metris (no seats other than for the driver/front seat passenger) is $25,995. A loaded Passenger (seven or eight seats, depending on which configuration you go with) stickers for $32,900.

Though it is a minivan, it is still a Mercedes minivan – and so is available with Mercedes-level equipment, including a seven-speed automatic transmission with toggle-style shifter, just like in an E-Class sedan, a heated windshield and automated parallel parking.

The budget-priced Worker version of the Metris is new for 2017. 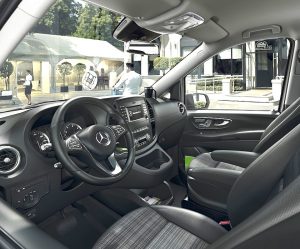 It’s a minivan. But it’s a Mercedes minivan.

RWD layout is burnout and tow-friendly.

Much tighter turning circle than some of the other large vans; easier to maneuver and park.

Costs less as it sits than non-prestige-brand minivans from Toyota, Honda and Chrysler.

No AWD option – so the RWD Metris will suck in the snow.

No V6 option, so the Metris isn’t as speedy as a Sienna, Odyssey or Pacifica (which all come standard with V6 engines).

No diesel option – which the Metris (any minivan) ought to offer, because it’s the way to go for hauling and towing and mileage, too – which is you’d think would matter to minivan buyers. And it does. But Uncle’s jihad against diesels trumps those considerations.

Add a few options and you’ll be paying Mercedes money for this minivan.

The Metris is also the only minivan that’s turbocharged. 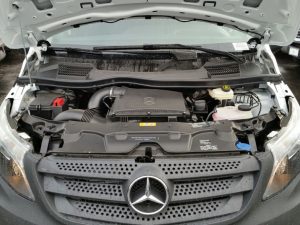 The Benz’s four has low-RPM guts. Which is why – along with the more rugged rear-drive layout – it can pull so much more than any other full-size van, 5,000 lbs.

And that’s the standard tow rating, too.

You can also put as much as 2,502 lbs. of cargo inside the Metris. This is 1,000 pounds-plus more than the other vans are rated to carry around inside – notwithstanding their larger (and higher horsepower) engines. It’s because they are fundamentally car-based/light-duty vehicles designed chiefly for people-carrying, not cargo hauling or towing.

The Metris can do all that and carry as many as eight people, too.

It’s not slow, either.

Despite being not-light (4,222 lbs. for the stripped down Worker version) it still can haul its big self to 60 in about 8.6 seconds. The V6 vans are quicker (Sienna and Odyssey can get to 60 in in about 7 seconds) but the gap’s a crack, not  chasm. 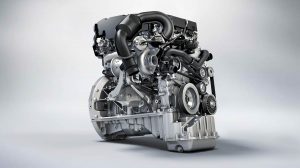 Same goes for the mileage.

There’s always a but.

As great as the rear-drive layout is for being Rugged, it is a Liability in winter and also in wet. The Metris is not the ticket for a snow-day trip. Engine up front – and light in the tail. The same great recipe for burnouts (and towing) is a recipe for fishtailing – and getting stuck – when the flakes are flying. 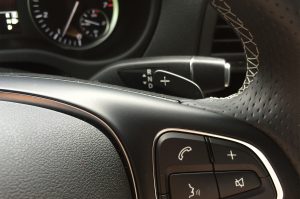 On this score, the FWD vans are superior – because they pull themselves along (rather than push) also because the weight of the engine/transaxle is right on top of the drive wheels, helping them to bite.

Some of the FWD vans – like the Sienna – also offer all-wheel-drive. So equipped, the Sienna is an outstanding snow day driver.

And that is the one thing the Metris can’t puff its chest out about. 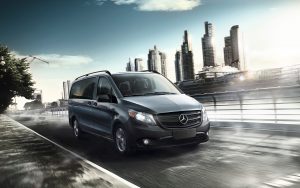 The last thing a minivan is supposed to be is fun. Expecting that is like expecting a good time at the DMV. Once every Halley’s Comet or so, you may find a cute girl behind the counter. But most of the time . . .

Except – more than you’d expect – this minivan. Allow me to elucidate.

It’s not just that it’s rear-wheel-drive and so the right tires are fed power. It’s also that Mercedes – Mercedes! – allows the traction control to be turned completely off anytime you like by simply depressing a button just the once. Other minivans – all of them – not only have the power going to the wrong wheels – if fun is wanted – any vestigial prospect for fun is strangled by traction control that can’t be turned off or programming that prevents the driver from simultaneously revving the engine while holding the vehicle stationary using the brakes, in order to roast the tires – which makes driving more . . . fun! 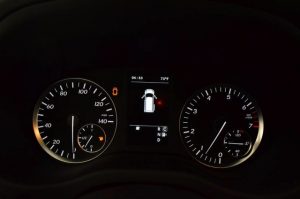 It is very fun to power brake a minivan – and disappear the thing in a cloud of tire smoke. You can do this in the Metris. You cannot do this in any other current minivan.

Beyond the joyful juvenalia of smoky burnouts, the Metris’ RWD layout is also better balanced than the nose-heavy front-drivers, which also have spongy suspension tuning and are long and tall and heavy. They lurch like a supertanker in a storm when worked hard in the curves – not that this happens much, of course.

The Metris is no AMG road burner but it does have less weight on the nose – and not just because the rest of the drivetrain (the transmission and axle) is spread out over the rest of the Metris’ length but also because that little 2.0 turbo four weighs less than the big V6s in the other vans.

This bus also sits really low to the ground – which counterbalances its height. 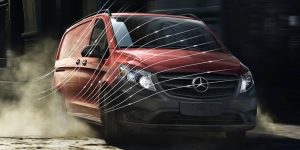 The Metris stands tall – 75.2 inches (vs. 70.7 for a van like the Sienna) but sits way low. There is just 4.3 inches of air gap between its underside and the pavement. This is almost two full inches closer to the pavement than the Sienna (which has 6.5 inches of clearance) and much improves its stability, particularly at high speeds – when air rushing under a vehicle has a tendency to lift it while air buffeting its body (especially a tall/boxy body) tends to destabilize it.

This low-to-the-ground profile is probably the result of Home Market Thinking. The Metris, after all, must deal with the Autobahn.

Which accounts for Crosswind Assist – to further keep the thing planted and pointed. And a Load-Adaptive Stability Program that adjusts the suspension for weight balance, to maintain the proper pitch (no nose high/ass-down attitude because you loaded a couple engine blocks in the back). 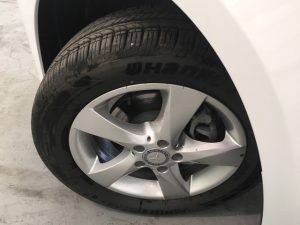 And high-speed stability aside, that hunkered down squat is very helpful when it comes to loading the Metris (more on this in a moment).

In the other vans – despite sliding side doors – it is sometimes hard to get in and out when parked at the mall, because the bus is just too Wide Load for the spot. You find yourself snugged up against the cars parked next to you and end up doing the sideways shuffle. The Metris gives you an extra several inches of side clearance. You lose some elbow room inside, of course. But the taller roofline makes up for the lost potential cargo room. 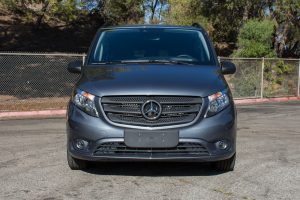 Some reviewers put the Metris in the same class as mini-vans like the Ford Transit, Nissan NV200 and Ram ProMaster City rather than compare it with full-size vans like the Toyota Sienna, et al. This is silly on several levels. 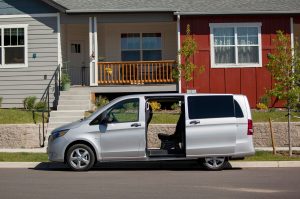 It’s true the Metris is powered by a four cylinder engine – as is true of the NV200 and Transit Connect – while the Sienna, et al, are powered by much larger (and standard equipment) V6s. But the fours in the mini vans are mopedian. The Nissan NV200, for instance. It also has a 2.0 liter four – but without the turbo. It makes a not-mighty 131 hp and 139 ft.-lbs. of torque and gets to 60 . . . eventually.

And cannot tow anything.

Some of the other minis can tow something – but generally not much. The Ram ProMaster City, for example, tops out at just 2,000 lbs.

And in any event, they are mini in size as well as power/capability – which the Metris isn’t on either score. 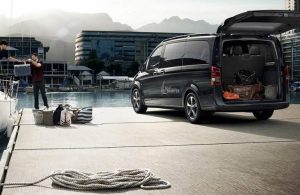 The Benz is also many notches up the niceness ladder. The NV200 especially is an extremely basic box meant chiefly for carting around a plumber or electrician’s stuff as he goes from job to job. The Ford Transit is nicer; in top trim, it is a plausible minivan, a conveyance for the family.

But a smaller family.

it has nowhere the interior space (or power/capability) that the Metris has. The Ram ProMaster van comes closest – in terms of size and capability as well as overall niceness, when ordered in top trim – but it’s not a Mercedes either.

The Metris is the only one that is. 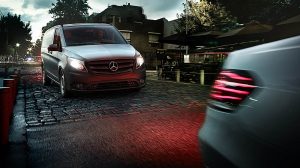 From behind the wheel, you could convince yourself that you are driving a GLK. Very similar dash layout, gauges and steering wheel.

The dash is a little on the hard plasticky-side, but much less so than the el cheapo Nissan NVs. You can get leather trim, three-stage seat heaters and a 5.8 inch LCD monitor for the GPS and audio systems.

The Toyota Sienna. Honda Odyssey and Chrysler Pacifica can be more luxuriously fitted out and offer things the Benz does not, such as rear-seat DVD entertainment systems and power sliding rear seats.

But they need those amenities. To keep your mind off what you’re driving. 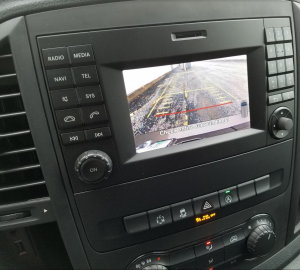 The low floor height makes getting in – and loading things – very easy. You could almost roll a full-size motorcycle into the back without ramps – and without having to remove the handlebars, due to the tall rooflline.

The Metris would be perfect if it could ordered with Mercedes’ superb BlueTec diesel engine. But Mercedes no longer offers a diesel engine in any U.S. mode . . . because Uncle.

They pulled them off the market because the EPA has gone Loony as far as positing completely unreasonable emissions standards which are not only becoming impossibly expensive to meet but also crippling the diesel engine’s main selling points: Much higher mileage than an otherwise-equivalent gas engine, along with simpler design/lower maintenance costs.

The EPA’s increasingly hysterical fatwas have had the effect of lowering the mileage of diesels – while also raising the cost of owning a diesel, via having to add Diesel Exhaust Fluid and more frequent service for other things. This puts people off, even people who buy Mercedes diesels and can afford the higher cost. 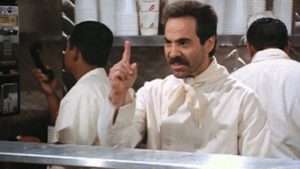 It’s a drag, because with the diesel four that’s available in European Benzes, the Metris would probably get 30-plus MPG on average, completely stomping the gas-burning Sienna, Odyssey and Pacifica – while also probably upping its maximum tow rating to 7,000 lbs.

That would make the Metris an alternative to V8 SUVs.

It tows, it hauls – and it fries the tires.

How many minivans can say as much?