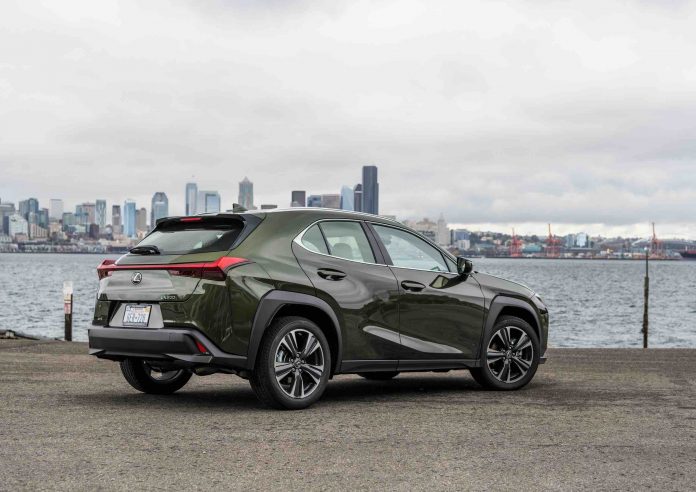 Lexus built the first luxury crossover SUV – way back in 1998, when it introduced the RX300. It’s hard to believe now, but before that year, there weren’t any crossover SUVs, period.

There were cars – sedans and coupes and wagons.

And there were SUVs – based on pick-up trucks.

The concept became immensely popular almost overnight – kind of like smart phones, which pretty much everyone now has, too. 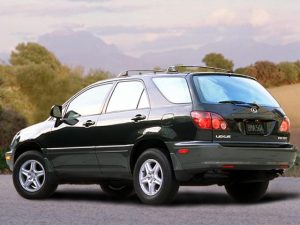 But Lexus didn’t have a subcompact crossover in its lineup until very recently.

The UX is the littlest brother of the better-known RX.

Both are crossover SUVs but the UX is a much smaller crossover.

It also comes with a much smaller engine – a 2.0 liter four cylinder and nothing larger – instead of a 3.5 liter V6, as in the RX. But it also comes with a smaller appetite: 29 city/37 highway vs. 20 city/27 for the bigger and thirstier RX. 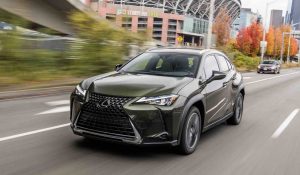 It doesn’t, of course, have as much room inside for passengers as its bigger brother. But like most crossovers, it has a great deal more cargo room than a car of the same overall size.

Surprisingly, it has more cargo capacity behind it back seats than its much bigger brother.

The one thing it doesn’t have is all-wheel-drive, unless you buy the hybrid version. Lexus specifically designed the non-hybrid UX to appeal to the urban driver, where snow is less of a problem than finding a place to park.

It also makes the UX the most fuel-sippy model in its class, because without additional parts that come with AWD – it doesn’t weigh as much as its AWD-equipped rivals, including the BMW X1 and the Audi Q3. 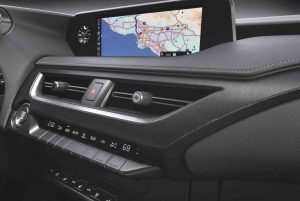 It’s also the bargain of the bunch, costing significantly less than its rivals.

All trims now come standard with the previously optional Blind Spot Monitor system and Rear Cross Traffic Alert.  The Enform suite of apps (including WiFi) has been updated as well.

Almost as much cargo space as an RX – for a lot less coin.

Standard run-flat tires could leave you stuck if you bend a wheel. 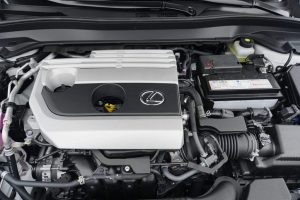 Regardless of trim, every UX200 comes with the same 2.0 liter four cylinder engine, which makes 169 horsepower.

If you do a lot of highway driving you may never make it back.

But you’ll make it up the driveway in winter, so that’s something.

Another unusual thing about this small crossover is that its engine isn’t turbocharged.

It’s not as strong as the turbocharged engines in some of the others in the class, such as the BMW X1’s standard 2.0 liter 228 hp engine and the Audi Q3’s standard 228 hp 2.0 liter engine (and standard AWD).

However, both of these rivals cost more than the Lexus – a lot more, in the case of the Audi. And both may cost you more later – because they have turbochargers. The additional pressure on the engine – and the additional parts – make this statistically more likely.

Lexus has built its rep on better-than-Toyota reliability – and it’s hard to get better than that.

Lexus does it by conservative engineering. It is one of the few – indeed, the only – luxury car brand that hasn’t hung a turbo off every engine it makes.

The UX may not be quite as quick as some of its rivals but it’s a good bet it’ll be running longer, costing you less overall.

And 0-60 in the high sevens, which the UX can deliver, is quick enough to not feel slow. 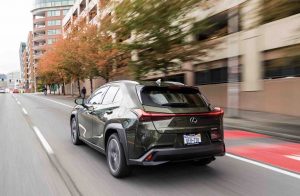 It may not be as competent in the snow, but Lexus isn’t touting its all-weather abilities. This one’s designed for the urban jungle, where being small and lithe is more advantageous than being able to clear a path.

Besides which, AWD is arguably oversold – especially when you consider the tires many AWD-equipped crossovers come with. The performance tires. These negate the traction advantage of having all four wheels powered since powering them doesn’t matter much when all four slip.

The truth – which the marketers prefer you remain unaware of – is that front-wheel-drive is pretty tenacious on its own, if you know how to drive – and even more so when the front wheels are shod with snow tires. Also a lot cheaper than all the equipment needed to power all four wheels. 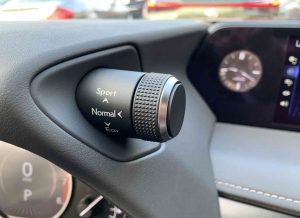 The hybrid offers four-wheel-grip if you want it – but the main reason to buy it isn’t traction but rather its stupendous fuel economy . . . if you live in the urban jungle. A 40-mpg-capable luxury crossover is a rare bird.

The standard CVT isn’t just a CVT. In addition to the usual continuously variable apparatus – a belt and pulley system that expands and contracts to vary the mechanical drive ratio for an infinitely variable set of driving circumstances – which is great for gas mileage – this box also has a conventional automatic’s planetary gearing, which is great for driving feel. The transmission has a fixed first (3.37) and second (2.24) gears that hands off to the variable belt system once you’re rolling.

Like the hybrid engine/motor thing, this gives you the advantages of two things without the disadvantages of the one thing by itself. In this case, the usual CVT sluggishness when you stand on the gas from a dead stop. Without losing the CVT mileage.

Lexus also programs the CVT to feel like a conventional ten-speed automatic by simulating 1-10 up and downshifts when in Sport mode, which also tightens up the steering feel of the electrically-assisted power steering system.

The UX comes standard with what Lexus styles Lane Tracing Assist, which is a kind of preview of automated driving tech to come. When engaged, the system can follow the road without your hands on the wheel – though a failsafe disconnects the system after a few seconds if you’ve taken your hands off the wheel. 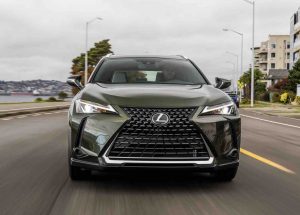 Though small, the UX has a huge “spindle” grille – the major visual identifier of Lexus vehicles vs. other brands’ vehicles. You either like it or you don’t but there’s no doubt about the UX’s parentage.

Just be careful with the shopping cart.

Though the UX is almost two feet shorter overall than its bigger brother, the RX350, it has more cargo room – 21.7 cubic feet – than the RX does behind its second row (18.4 cubic feet).

It also has about twice the cargo room of a subcompact sedan the same overall size, which accounts for the declining interest in small sedans.

A clever tiered storage system makes the most of the space it has, too. 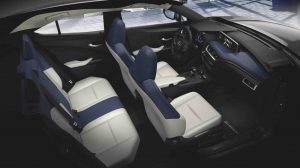 Front seat legroom (42 inches) is ample but the back seats are tight (33.1 inches) both in actual terms and relative to the room the backseaters get in the A3 (36.1 inches) and the X1 (37 inches). This is surprising given that both of these are slightly larger – well, longer – vehicles than the UX.

It’s a case of function following form. Lexus focused its efforts on making the UX look sleeker than the usual crossover by extending – and lowering – the shell. It’s not as practical inside the shell as a result of this, but it also doesn’t look the same as all the other shells. 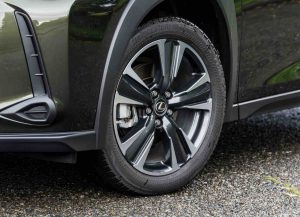 While you can’t get more engine, you can get more sound.

The optional F Sport package includes an augmented sound generator that makes the 2.0- liter engine sound fiercer by piping in the sound of more power through the audio system. This is also perhaps a preview of things to come, as cars become more simulated than actual.

Though generally well-equipped, some features that ought to be standard at this price point – like a hands-free liftgate and memory settings for the driver’s seat – are extra.

All trims come standard with 18-inch run-flat tires, which means you can keep on driving even if the tire is punctured. That’s the good news.

The bad news is that the absence of a spare wheel means you’ll be stuck if one gets damaged, as by a curb strike or from hitting a really bad pothole.

If you like the RX but want a third less RX, the UX might be the right-sized Lexus for you.