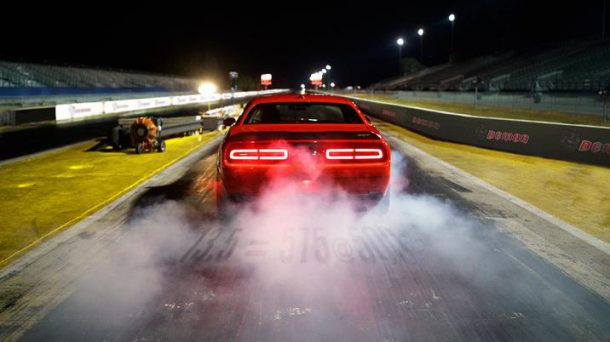 Because the principle at stake is critical.

If it is acceptable to chip away at a right because of this – then surely that will follow. It is like the income tax, which people were assured would apply only to “the rich” when it was first proposed.

Now, of course, it applies to everyone.

Because the principle of taxing people’s earnings was accepted. Once that was accepted, it was hard to make a principled argument against taxing anyone’s income.

Which brings us to Larry Vellequette.

This guy – a writer for Automotive News – is having a conniption fit over the Dodge Demon.

He believes it is too powerful, too fast; that it is irresponsible for the government to allow people to own it.

And it is extremely quick – capable of a single digit quarter-mile run.

His argument amounts to the same argument used to peddle “sensible” restrictions on the right to possess firearms. Someone might run amok – ergo it must be presumed that everyone will run amok.

Does anyone need a rifle that holds more than one bullet? Arquebus, anyone?

A current-year V6-powered family sedan like the Honda Accord has that much and it is quicker and faster than most Ferraris and Porsches were back in the ‘70s.

Do families need such performance?

A modern liter class sport bike is at least as quick as the Demon – and they are priced such that almost anyone can afford to buy one, too.

No air bags, either. 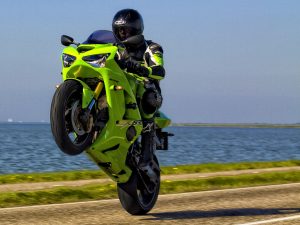 Vellequette “…take(s) great issue with the nearly treadless Nitto drag radials that come standard on the $86,090 Challenger SRT Demon.” He sweats their single-minded design, which – though DOT street legal – makes them not-so-great in wet and wintry conditions.

Why not also “take issue” with the “summer” ultra-performance tires that are just as single-minded and compromised and also commonly available as factory equipment on numerous other cars?

And have been for years?

How about the ultra-soft, ultra-performance tires installed on liter-class bikes? These last maybe 2,000 miles and are designed for high-performance use only. Of course, people who ride sport bikes realize this and don’t ride in the snow – just as as people who buy the Demon understand it is not an AWD minivan and don’t expect it to perform like one in poor weather.

Why the selective umbrage? It is based on specific ignorance.

Vellequette quotes the paperwork that comes with the Demon: “Drag tires are not recommended for driving in wet weather conditions where there is a risk of hydroplaning.” He also mentions the very short tread life, a function of the soft compound used to make the tires.

The same warnings accompany “summer” tires – as well as other purpose-specific equipment. Why no warblings from Vellequette about that?

He also “takes issue with the Demon’s launch control” – which is an electronic feature that numerous other performance cars, including the current Chevy Corvette, the Camaro, the Ford Mustang and many others also have and which does exactly what it sounds like it does: It uses the car’s electronic systems – in particular, the traction/stability control system – to modulate the engine’s power delivery for the smoothest/quickest launch and maximum acceleration.

In other words, it is a de facto safety system, designed to keep the car under control vs. fishtailing all over the road.

Vellequette regards this as “unconscionable.”

I find his ignorance even more so – almost as much as his condescending pre-crime control-freakism.

Vellequette favors “ . . . a two minute delay before the launch control would be fully engaged.” That way, the driver could launch the car in an uncontrolled manner. 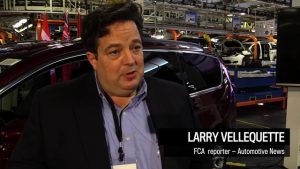 This guy – an automotive journalist writing for a publication called Automotive News – does not grok what launch control is. Much less how it works. His worry is that with launch control, “consumers” – loathsome word, suggestive of Jabba The Hut-like creatures gorging at a trough – will be able to “unleash the Demon’s full horsepower every time they pull up next to a Corvette or a Tesla.”

Well, Larry (who clearly unleashes his unrestricted appetite at every press event chow line) here’s some news for you: The Demons’ full horsepower is “fully available” with the launch control off. The system merely optimizes the rest of the car to take fullest advantage of it. It is designed specifically to limit wheelspin – which is the enemy of acceleration – in order to keep the car pointed in a straight line rather than going sideways.

In other words, the car is safer with the launch control engaged.

The words of Dr. Evil from the Austin Powers movies come to mind: Why must I be surrounded by idiots?

Larry goes on to bemoan “… amateurs who endanger the motoring public every time their manhoods (are) challenged at a stoplight.”

Sounds like Nancy Pelosi talking about firearms, doesn’t it?

And he is just as dangerous.

If the suggestion that a car more powerful/faster than people “need” (that “need” to be determined, one assumes, by experts such as Larry Vellequette) must not be allowed isn’t stomped to below pavement level before it gets a chance to grab traction, a vile principle will have been established and before long, we won’t be allowed to drive anything more potent than a Prius.

Which, for the record, also has substantially more power and speed than anyone “needs.” It can do at least 115 MPH (trust me). Given that no one needs to drive faster than about 80 MPH – the highest legal speed in the U.S. – why should anyone be allowed to buy such a potentially dangerous car?

Or for that matter, a V6 Accord.

It’s time they got an earful from us “consumers.”