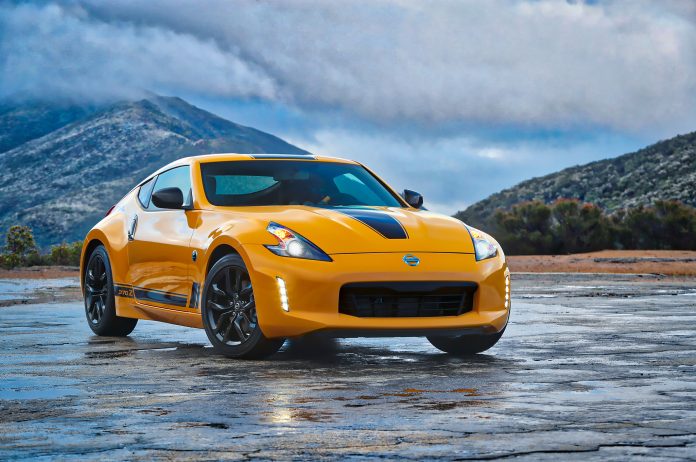 Over the course of its long life, Chevy has almost cancelled the Corvette at least twice.

Ford once gave thought to dropping the Mustang.

Wisely – as it turned out – neither car was given its walking papers when sales temporarily drooped. The people in charge were savvy enough to see the bigger picture; they realized the importance of the presence of these halo cars in the lineup to the sales of their other cars – even when the halo cars weren’t moving particularly well. 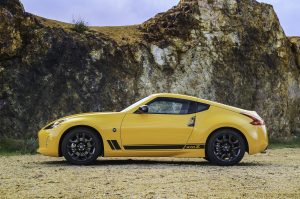 A shiny new Corvette looked good as the centerpiece of a dealership’s display. Even if it didn’t sell, it  brought in people who drove home in new Malibus. Mustang aspirations got people behind the wheel of Fiestas.

Their halo cars come – and go.

Word is that the 2018s will be the last of them. For awhile, at least. 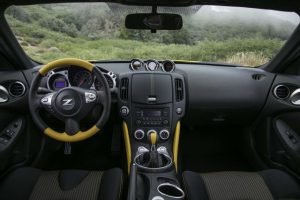 The 370Z is Nissan’s two-seat high-performance sport coupe/convertible – the scion of a line that dates back to the iconic 1969 240Z.

It occupies a slot in between more powerful – and more expensive – high-performance coupes/convertibles like the Chevy Corvette and modestly priced but not nearly as powerful sports cars like the Subaru BRZ/Toyota 86 and Mazda Miata/Fiata (the Miata-based Fiat Spider 124). 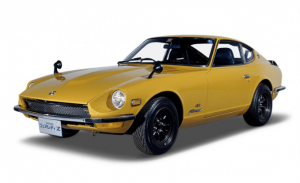 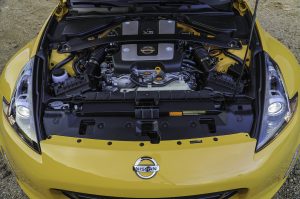 A Heritage Edition – available in Chicane Yellow or Magnetic Back – is now available.

It is meant to remind buyers of the early Z cars, especially the original ’69 240, which was also done up in a similar yellow/black paint scheme.

All Zs get revised programming of the drive-by-wire throttle system to make the engine feel more responsive, especially during part-throttle transitions. 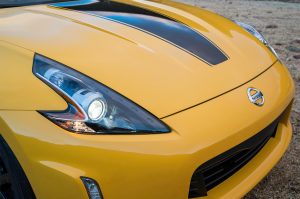 Inside, the standard audio system gets upgraded to six speakers from four previously.

Much quicker than a BRZ, 86 or Miata/Fiata.

Less pricey than a Corvette.

Nissan’s 3.7 liter V6 has an excellent track record for reliability and low-cost upkeep.

If the rumor is true and Nissan cancels the car after the 2018 model year, you’ll own an icon – the last of the line. 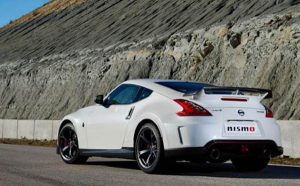 Other than the new Heritage Edition styling and the powertrain tweaking, it’s almost exactly the same car this year as it was five years ago.

370Z are powered by a 332 hp version of Nissan’s 3.7 liter DOHC V6, paired with either a six-speed manual or (optionally) a seven-speed automatic. The manual is available with computer-controlled, throttle blip/rev-matching downshifts for smoother (and quicker) gear changes. The automatic s available with paddle shifters and learning algorithm software that tailors shift feel/timing to your driving – as you drive. As you get more aggressive, the shift action becomes more aggressive.

The optional Nismo package ups the V6’s output to 350 hp. 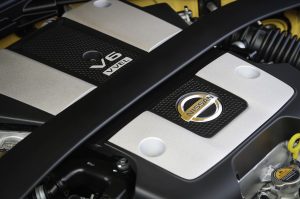 The Nismo’s extra 18 hp not making much of a difference as far as the stopwatch goes.

While hp determines ultimate top speed, it’s torque that gets a car moving.

The Nismo Z does sound tougher, though – due to the lower-restriction exhaust that comes as part of the Nismo enhancements – which also include higher-capacity brakes, strut tower bracing, track day-ready suspension calibrations and a pretty wild-looking GT-R supercar themed body kit with slats and air diffusers. 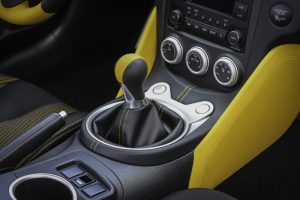 Gas mileage is 18 city, 26 highway with the six-speed manual transmission.

While not terrible for a high-powered sports car, these numbers are about the same as the numbers posted by higher-powered supercars like the current Corvette – which comes standard with a 455 hp 6.2 liter V8 and gets to 60 in just under four seconds.

The Corvette is no lightweight, either – 3,428 lbs. at the curb for the coupe. But its huge V8 produces 465 ft.-lbs. of torque – not far from twice the torque produced by the Nissan’s V6.

That’s why it gets going as quickly as it does.

But on the other side of the coin, the Z massively outguns the under-engined (and under-torqued) Subaru BRZ and its badge-engineered brother, the Toyota 86 coupe. Their tiny fours (no turbos) make just a bit more than half the torque made by the Nissan’s V6 – a scrawny 156 ft-lbs. – and not until a stratospheric 6,400 RPM. 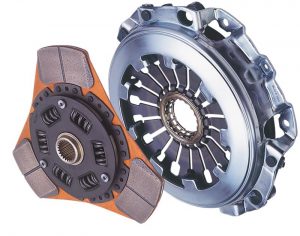 And their fuel economy, though higher, isn’t all that much higher: 21 city, 29 highway with the manual transmission.

Put another way, you get 127 more hp, 122 additional ft.-lbs. of torque – and get to 60 a solid second-plus earlier (a difference that is very seat-of-the-pants noticeable) at the cost of 3 MPG in city driving and 3 MPG on the highway – a difference that isn’t noticeable unless you are really keeping track of it.

Those are the upsides.

The Z began life as a sports car – light and agile more than quick. Arguably, it was the original Miata. A well-built alternative to the high-powered but clumsy American stuff – and the poorly built Italian and British stuff. 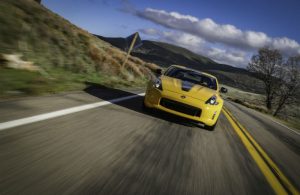 It couldn’t run with the V8 muscle cars of the time in a straight line – but in the curves, it could leave them floundering. The original Z car was also inexpensive, wife-drivable and commute-friendly. It had good brakes – rare, in the early ’70s – and got good gas mileage, too.

This car sold like funnel cakes at the state fair.

As the 70s rolled on, the 240 became the 260 and then the 280ZX. It got heavier and less agile and more expensive. At one point, they even added back seats.

Then came the 300ZX – including one with twin turbos. It was even heavier and though it was a ripper, sales flagged. That car got cancelled. 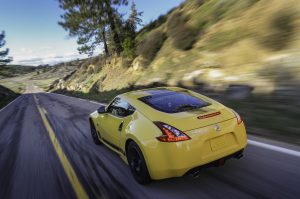 The current 370Z is caught in between worlds. It is closer in many ways to the original/minimalist 240Z than to the gaudy 300ZX. But it is still trying to be at least partially a high-powered GT (like the Corvette) that is also still a sports car.

Thus the problem – as far as sales.

Though you can buy one for under $30k – and that’s not too far away from the price of a BRZ or Miata/Fiata – it’s very easy to pay closer to $40k.

And that puts the car too close to the Corvette.

Engine/power/acceleration stack-ups ensue. We know who wins that one. 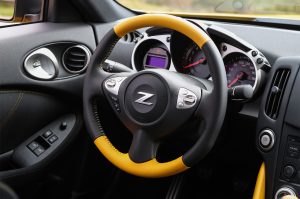 And even though you can buy a Z for under $30k – and get more engine/power/acceleration than the BRZ and Miata offer – you’re still getting a much heavier, more aggressive-feeling (and looking) car that’s a very different kind of car than a BRZ/86 or Miata/Fiata.

This is not my personal opinion but rather the verdict of the market, as expressed by sales. So far this year, about 400 Z cars find homes each month. That works out to about 8-10 per state. For perspective, Chevy sells about 2,500 Corvettes each month. Mazda is closing in on the millionth Miata. 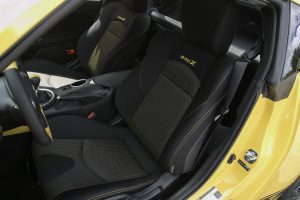 It’s a shame because the 370s is a lot like a front-engined Porsche 911 – and for a lot less money. It has the cornering reflexes of a chased rabbit and there is enough power to leave the line with both tires making smoke (forget about this in the BRZ/86).

The engine will spin to almost 8,000 RPM – the free-revving enhanced by an ultra-lightweight carbon fiber driveshaft.

The action of the six-speed manual is as mechanically gratifying as the action of a custom Kimber 1911 .45 with a 3 pound trigger. The throttle blipping/rev-matching downshifts will make you feel – and look – like a pro. The steering is laser-sight accurate, the chassis willing, the grip threshold seemingly limitless. 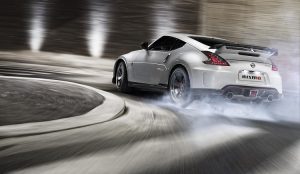 And yet, it doesn’t have the following you’d think it would.

That might be the sweet spot Nissan hasn’t managed to hit dead-on since the days of the 240/260Z. 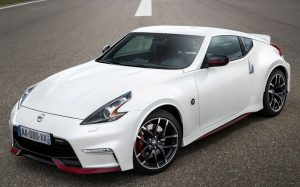 The more compact size of its V6 (vs. the Corvette’s V8) allows a relatively short nose – and the wheel centerlines being more than six inches closer makes it look (and feel) much more compact than the Corvette – which is a pretty big car.

The Z’s proportions are much close to those of the BRZ/Toyota 86 – which are 166.7 inches long overall and ride on a 101.2 inch wheelbase. But the Z has about an inch more headroom (38.2 inches vs. 37.1) and though it doesn’t seem like much of a difference, for taller drivers, an inch (plus or minus) can be a deal-breaker. 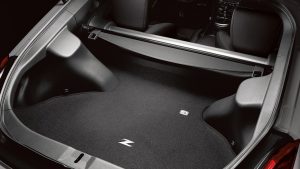 Naturally, the trunk is tiny: 6.9 cubic feet. But the liftback layout (like Corvette) makes it feasible to carry unwieldy objects. Also, Nissan includes storage bins and cubbies sprinkled here and there, including behind the front seats – and while they may not have much room individually, collectively (if you’re creative) you can pack a Z with more stuff than you’d expect. For example, several cups of coffee – a feat made doable by the large, molded-out lowers built into each door panel.

The vibe of the interior is Dark Knight serious. Matte black and nickel finishes. All-analog primary gauges dominated by a centrally mounted tach with the speedo off to its right. On the dashtop and canted toward the driver are three secondary gauges, including oil temperature (but oddly, not pressure). 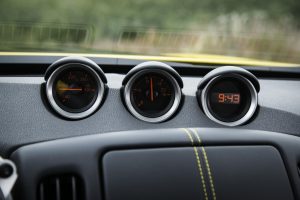 Secondary controls (AC, heat, fan speed, stereo) are hand-operable without looking at them. Forward visibility is good, but the view to the sides and rear is what you’d expect given the squeezed-back side glass and steeply sloped rear glass. 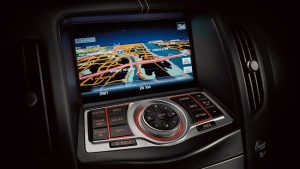 If you want something in the middle – more performance than the base car but not quite as expensive as the Nismo – go with the Sport package. It adds the upgraded brakes (14 inch powder-coated calipers in lieu of the otherwise standard 12.6 inch calipers), ultra-light 19-inch wheels with “summer” high-performance tires plus a limited slip differential and a deeper chin spoiler.

Remember: It’ll still be about as quick as the more expensive Nismo version.

Nissan is on the right track, I think, with the Heritage Edition – as a concept. 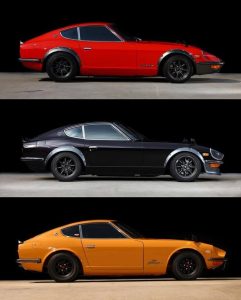 A lighter car would be even better.

It would be interesting to see a cafe racer version of the Z – like the Heritage Edition as far as the visuals, but shorn of price and weight-padding equipment that have fluffed up the Z-car’s price tag and added four figures to the car’s curb weight since the days of the 240Z.

Imagine a 2,800 lb. Z with a $26k price tag. It would make cars like the BRZ/86 look silly, cream the Miata/Fiata – and make a Corvette look like an overpriced Viagra-mobile.

I think that car would sell. 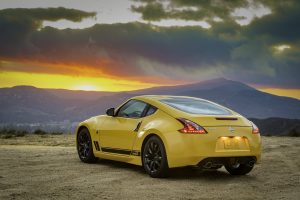 Better than funnel cakes at the fair.

The Z car deserves a reboot – not retirement.

Hopefully Nissan will realize this and not turn out the lights.