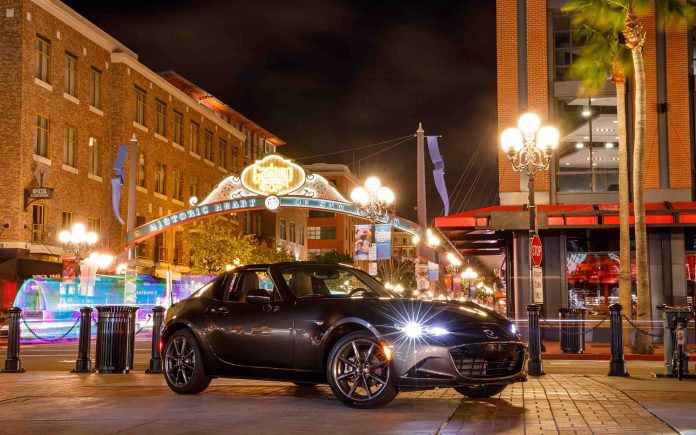 The one thing wrong with the Miata – for some people – Mazda just fixed.

That thing being the Miata roadster’s convertible top. Not everyone likes a soft top – including some people who really like the Miata.

Soft tops, though much improved in terms of protection from the elements – still don’t offer much in the way of physical security from the element. A switchblade grants instant access to the car – and whatever’s inside the car.

But it’s not just that. 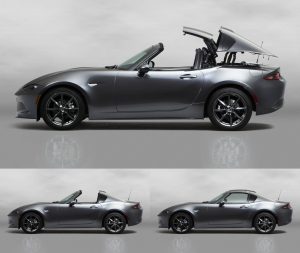 Convertible soft-tops are harder to keep looking good; park a convertible outside in the elements for a few years and the top tends to stain – and the stains can be a pain to get rid of.

Also, some people just don’t like driving with the top down. They are Hardtop People.

Well, Mazda’s got the Miata for them.

Maybe for you, too.

The RF – Retractable Fastback – is a new version of the Miata roadster. Instead of a fold back convertible soft-top, the RF has a sliding back hardtop section. When in place, the Miata is a sport coupe with a more physically secure roof. 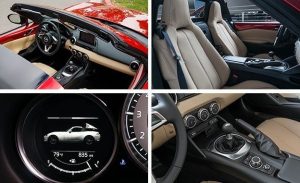 Otherwise, the RF is functionally and mechanically identical to the soft-top Miata. Both have the same engines, same transmissions and share identical interiors and general specifications.

The RF’s base price is higher – $31,555 for the Club trim with six speed manual transmission; adding the available six-speed automatic bumps the sticker up to $32,855.

A top-of-the-line Launch Edition (with the automatic) stickers for $34,925.

The RF version of the Miata is new.

The Miata’s mechanicals – which both versions share – were completely updated last year.

A Miata for people who prefer a hard top.

Feel better about parking it on the street.

Easier to keep it clean – and looking good.

No loss of trunk space.

RF or not, the Miata is arguably one of the top two or three  sports cars ever made.

Almost a $7k bump to not go topless.

The bar-none worst power point location of any car ever made. You might not even be able to find it. If you do, good luck reaching it. 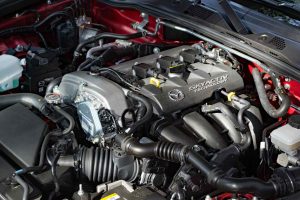 Last year, the Miata was all-new and one of the new things about it was a changed powerband. The engine is the same size as it was before – a 2.0 liter DOHC four  – but it’s been retuned – and here’s where it gets potentially dicey.

When you first scan the specs, you might be disquieted to discover that the current version of the 2.0 liter four – an engine revered for its revvyness – now makes less power and lower down: 155 hp at 6,000 RPM vs. 167 hp at 7,000 RPM previously.

Have the Miata’s incisors been filed down? 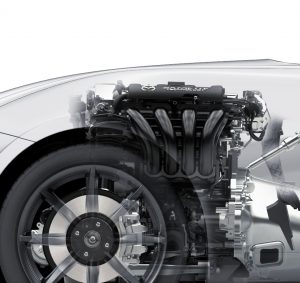 Not if its bite is the measure.

The Miata is quicker than ever – with the roadster (soft-top) capable of getting to 60 in six flat vs. 6.7 for the previous-gen. Miata.

Part of the reason for the performance uptick is a curb weight downtick. The current Miata, redesigned for the 2016 model year, weighs 2,332 lbs. vs. 2,480 lbs. for the previous Miata roadster – a difference of 148 lbs. 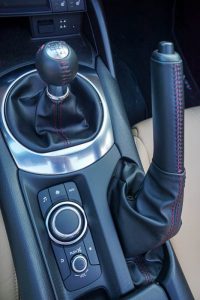 Not a bad box at all, but the six speed’s tighter gear spacing gives a leverage advantage, especially in a light sports car with a small, revvy engine.

Speaking of that. Don’t believe the tach. While the redline might appear to begin earlier – according to the red hash marks north of 6,600 – the engine will still happily spin to 7,000-plus, as before. The rev limiter doesn’t curb your enthusiasm until right around 7,200 RPM.

But here’s the really interesting thing:

The RF, as it turns out, is 150 pounds heavier than the roadster. Put another way, the RF is almost exactly as heavy as the previous generation Miata roadster. And yet it is still much quicker – which is testimony about the importance of the torque difference and the leverage advantage of the six-speed transmission. 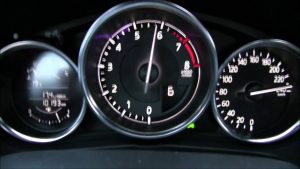 Another thing in our favor is that the Miata – RF or roadster – is a very economical car to drive. Its gas mileage – 27 city, 36 highway for the soft-top with the six speed manual and 27 city, 34 highway for the RF with the same transmission – is with a couple of MPGs of cars like the Toyota Corolla and Honda Cvic – and while those are great cars, they’re . . . economy cars.

The Miata – RF or roadster – is the antithesis of that.

Yet, it is still economical to drive  . . . every single day.

There may not be such a thing as a free lunch – but the Miata comes really close. 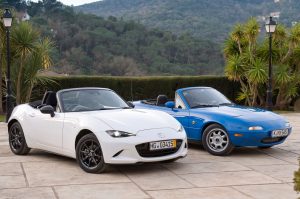 It is going on 30 years now. That’s how long the Miata has been around. And there are lots of Miatas still around. Nearly 1 million of them of them have been produced since the first one, way back in 1989.

That is stupendous for a two-seater fun car.

It is a function of the car being more than merely fun.

Consider how many other fun cars have come – and gone. And do not last as long. Either in production or on the road. How many ’90s-era Corvettes do you see around? Or for that matter, how many other sports cars from the ’90s?

Miatas abound for several reasons – perks that come along for the extremely excellent ride. We have touched on two. The roadster’s almost unbelievable affordability – and the Mazda’s economy car mileage, roadster or RF. 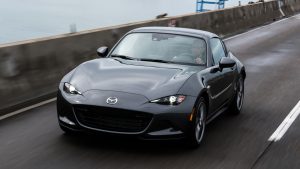 Another is the Miata’s unkillability. It is a car that you can treat like a weekend SCCA racer every single day and it (paraphrasing Kyle Reese in the original Terminator) absolutely will not blow up, ever. Hell, it’s hard to get the thing to burn oil.

There are Miatas out there with 150,000 miles that drive like Miatas with 15,000 miles. It is incredible. And it explains why there are so many. They don’t attrite. They just get better.

Which brings us to this RF. 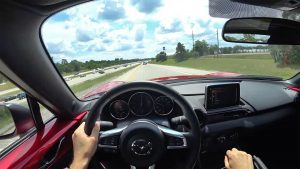 It’s a bit quieter inside with the targa top in place – and also with it stowed, because the only open section is the roof section. The RF’s side/sail panels remain in place and that dramatically reduces wind swirl vs. the roadster with its top down. It reminds me a lot of my high school ’78 Camaro with T-Tops . . . minus the leaks (and squeaks).

And also, the work.

With T-Tops, you had to stop, get out, pull the tops off, and stow them in the trunk. In the RF, you just press (and hold down) a switch. The sail panel section cantilevers up and rearward, making room for the roof section, which stows underneath. And you can do this with the car moving – up to about 6 MPH.

Targa top or soft-top, the Miata is 190 proof fun without the hangover. 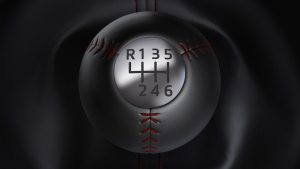 The engine is brilliant – and tractable. Power (and torque) enough for the stop-and-go grind, made even more agreeable by an easy take-up clutch and outstanding visibility all around you. But when traffic dissipates – or you feel like leaving traffic behind you – grab a downshift and let the engine sing its song, all the way to 7,000 or so. Stab the clutch, grab the next gear. The power hits and the car’s rear does a pleasant little left-right stagger step, accompanied by the cheery chirp of the tires as they regain full grip. 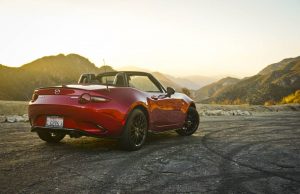 Then, a downshift as the next curve approaches; feather the brakes just a bit to settle the thing in its groove and then kick it in the ass again, hard. Full power at the apex, the engine orgasmic now.

And so, almost will you be, too.

It is your boon companion, sheetmetal musketeer – up for any adventure, just the two of you.

No matter how bad a day you’re having, if you take a Miata for the drive home, it won’t end badly. Therapy and drugs are oversold. 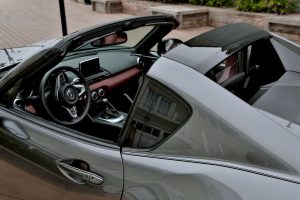 Opinions will vary but in my sight, the RF is a better-looking Miata than the Miata roadster. The sail panels have a Ferrari 308-ish vibe to them and whether the roof section is in place or stowed, the lines just seem right.

Also, the artistry of the up/down ballet would have impressed DaVinci.

Particularly that not an inch of trunk real estate is sacrificed when the roof section is retracted.

Which is good because there isn’t much to spare. 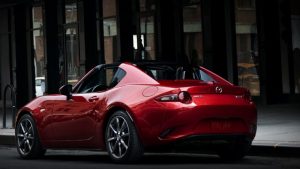 Both the RF and its soft-topped sister have 4.6 cubic feet of trunk space. This, for reference and scale, is about half the space available for stuff in the backside of (wait for it) the Fiat 500 micro-car (reviewed here).

This lack is one of the few not-practical things about the Miata. It goes with the two-seater sport car layout.

And for two, the Miata is just right. Cozy – and roomy – which sounds like a contradiction but isn’t. There is more legroom (43.1 inches) in the Miata than in most mid-sized and several full-sized sedans. At the same time, everything is close at hand. The cockpit envelopes you like a body suit  . . . like a motorcycle riding suit.

This feeling is enhanced by the sport bike-like instrument cluster, which is happily analog and not digital. 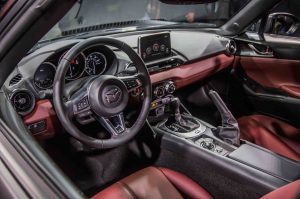 On the center console – just aft of the couldn’t-be-more-ergonomically-inspired gear shifter – is the manual pull-up emergency brake lever. A sports car without that – and with an electronic parking brake – has been badly gimped and its owner ill-served.

No such worries here.

The RF’s trim structure is a bit different than than the soft-top’s. No Sport trim. The RF starts with the Club trim, can be upgraded to Grand Touring and offers a unique-to-the RF Launch Edition, of which only 1,000 will be made. 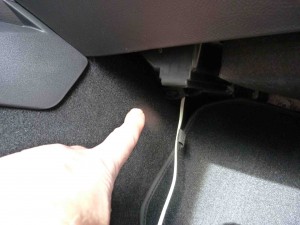 No car review is compete without at least one complaint. Okay. Here it is – and I had to dig deep for it:

The Miata – whether RF or roadster – has an almost-unbelievably inaccessible 12V power point. The thing is located way deep in the passenger side footwell. It is literally almost impossible to see it and if you wanted to plug in a device – a radar detector, for instance – you will have to get on hands and knees and go spelunking.

It’s the most perverse power point I have ever had to deal with in 20-plus years of test driving new cars. 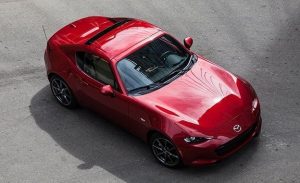 But other than this?

Don’t look at me.

When all you can find to complain about is the location of the power point, you have a handle on the automotive filet mignon that’s just been served up. Whatever they’re charging for this thing, you’re getting a deal.