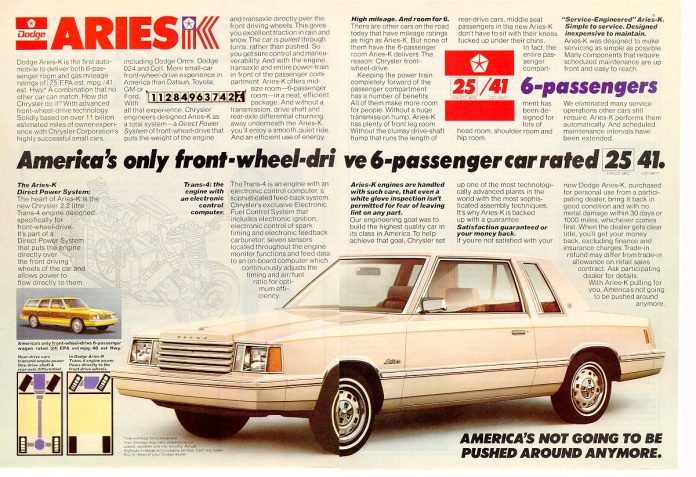 Lee Iaccoca gets blame – or credit – for the 1981-1989 Dodge Aires and Plymouth Reliant K-cars, but unlike the minivan, this one’s really not his fault.

He simply took the ball and ran with it.

Though Iaccoca touted the virtue of K-cars aggressively once on board as Chrysler’s newly installed chairman (after having been fired by Henry Ford II), the K-car had been in development since the late 1970s. Management realized that  battling the surge of high-quality Japanese imports with vinyl-roofed Volarés and Cordobas decked out in “rich, Corinthian” leather probably wasn’t cutting the mustard. These weren’t bad cars, actually. Just the wrong cars for the times. 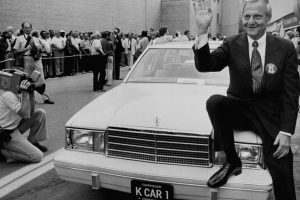 They were automotive Aurochs, beasts engineered for very different times.

The change in scenery that took place between 1970 and 1981 – the year of the K-car’s launch – was dramatic. And not just at Chrysler. The entire American car industry did a parking brake 180 – converting pretty much its entire inventory from heavy-rollers with V8s and rear-wheel-drive to much smaller – and much smaller-engined – front-wheel-drive cars, both to meet changing buyer wants . . . and new government demands.

Corporate Average Fuel Economy (CAFE) standards were as much responsible for the transitioning of the industry as market forces. In 1975, the government issued a fatwa decreeing that every car company’s entire fleet of vehicles must average a certain mandatory minimum miles-per-gallon. It was the first time that the government intervened between car buyers and the gas pump.

Failure to make the CAFE cut meant “gas guzzler” fines for the offending car/company. These of course were passed on to buyers, making it increasingly harder to sell big – and bigger engined – cars.

The CAFE standard was initially set at 18 MPG for passenger cars but was on schedule to rise to an impossible 22 MPG by 1981 – and then again to an even more impossible 27 MPG by 1984.

And under the hood? 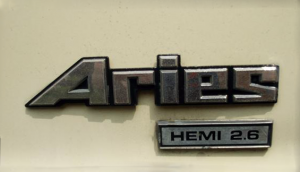 This was the ’81 K-car’s highest performing engine.

Chrysler’s own engine – the 84-horsepower 2.2-liter “Trans-Four” – the
“trans” not meant in a Bruce Jenner way, but as a reference to the engine’s transverse, or mounted sideways-in-the-engine-bay position – was the K-car’s standard engine. It would entertain its owners with an erratic, surging idle caused by the problem-prone computerized spark-control unit that resulted in the engine’s timing jumping by 2 to 5 degrees – as if the lock-down bolt on the distributor shaft were loose except it wasn’t. 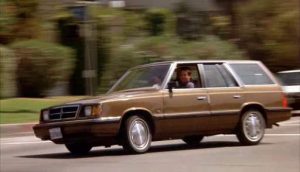 When Chrysler switched to a slightly less crude Throttle Body Fuel Injection (TBI) system in the mid-1980s, it created another form of in-car amusement. As one contemporary reviewer wrote: “Chrysler’s TBI motors had a rather steep throttle tip-in, meaning if you tapped the rather stiff gas pedal, you got a lot of revs. Starting an automatic K-Car without jerking your passenger’s neck required a bit of practice; with the five-speed’s clunky shifter and abrupt clutch, driving smoothly was nearly an art form.”

Luckily, not much harm could come from a car that didn’t go very fast.

There was no pistol grip shifter. No Air Grabber hood scoop option.

But you did get an 85-miles-per-hour “federal” speedometer – which was about right, given the K-car’s top speed. 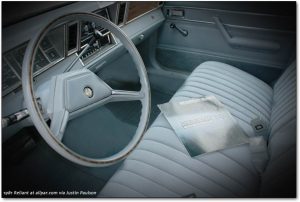 The other thing you got was three times the mileage delivered by the big block Mopars of the early ’70s.

Mind, that was with a carbureted engine and a transmission without overdrive gearing. It was nothing less than spectacular. Consider that today – almost 40 years later and with all the advancements in technology – very few new cars can manage 40 or better on the highway.

You also got six-passenger capacity in a car that was smaller on the outside than a current-era five-passenger compact sedan, such as a new/2018 Corolla. This went for the two-door version of the K-car as well as the sedan. It was made possible by three-across bench seats in both rows – no center console dividing the real estate. Also, the front-wheel-drive layout did away with the space-hogging hump in the floorpan that characterized rear-drive cars of the era (as well as our era).

You could get a manual transmission in the thing, too – including the sedan.

This then was this car that lead to Chrysler’s return from the abyss and enabled the company to go on to bigger and better things  . . . like the minivan.

The K-car is the object of many jokes and was as exciting as granny panties, but it was that kind of time. Inflation was running amok; people were paying double interest on loans and gas cost more then – adjusted for inflation – than it does today, more than 30 years down the road.

A ’70 Hemi Charger was exciting. In the way that a weekend in Vegas with the guys is exciting.

But come Monday, a K-car in the garage made a lot more sense. 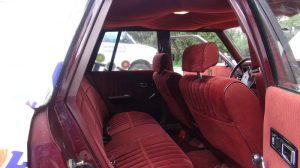 Instead, we have over-priced, over-teched, space-inefficient cars that are larger on the outside and have less room inside. This includes today’s front-wheel-drive cars, which no longer have flat floorpans or three-across bench seats. The flat floorpans went away as a result of the Sporty Cult that requires even minivans to be “sporty” – which means they are lower to the ground. Which means, to make clearance for things like exhaust pipes and such, even FWD cars now have drivetrain tunnels – and lumps in the floorpan – just like RWD cars.

Bench seats went away for the same reason. Not “sporty.” 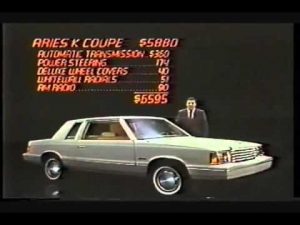 Even though interest rates are single digit today, people are more in hock than ever. Gas may be cheap, but new cars are absurdly expensive.

One wonders whether the tooling for the K-car still exists.  If it does – and if it weren’t for Uncle and his rain of fatwas – probably the lines could be cranked up again and brand-new 50 MPG-capable 2018 K-cars, updated with overdrive transmissions and a few other worthwhile technological improvements  – this excludes eight air bags and back-up cameras and such – could be built and sold at a solid profit for the manufacturer for around $6,000 MSRP.

Makes a helluva lot more sense than a Tesla – or even a Corolla.

Which no doubt explains why it’ll never happen.