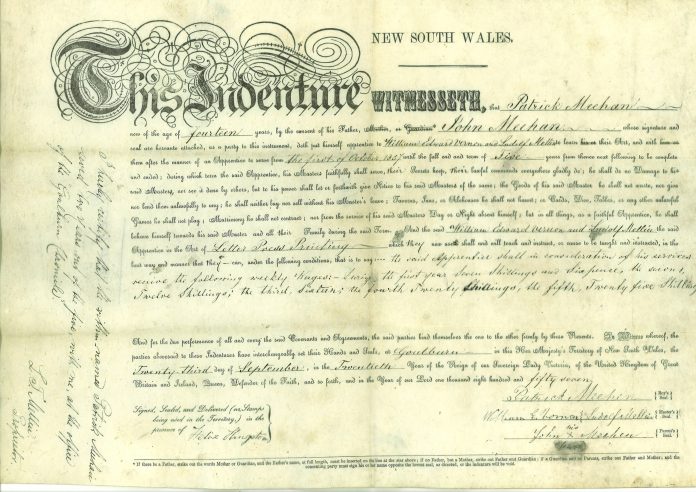 The more I work on the ’72 Beetle – aka Sexual Chocolate, the car I am helping my teenage protege learn to work on – the more I realize why most teenagers have lost interest in cars.

The Beetle is not just easy to work on, it is very cheap to work on. This matters to teenagers, usually. Which is why cars like the Beetle were so appealing to teenagers – and young people generally.

A car is no longer fun when you are indentured to it. When it is constantly bleeding you of sums you’d rather spend on other things.

Or sums you simply haven’t got.

A car like the Beetle is not an indenture contract on wheels.

For that sum, he got a viable and fun car he can deal with. Sound body – good floorpans, no welding to do – and a mechanically healthy drivetrain whose operations he can fathom.

There was some jerry-rigging to undo/correct, such as a huge vacuum leak as a result of the “modifications” performed by the previous owner – but this was fixable as opposed to replaceable.

Not much money, anyhow.

The Beetle’s intake – the center section – is made of cast iron, which can be welded if it is damaged. You cannot weld a plastic intake manifold – which most new cars have. If a plastic manifold cracks, you have to replace it. This generally costs a couple hundred bucks, which is a sum most teenagers do not possess.

The Beetle’s manifold was fixed for . . . nothing.

Well, some welding wire and 10 minutes of work. That plus $10 for a set of new boots (to connect the aluminum end pieces) and a pair of gaskets to connect the works to the engine. The physical installation involved tightening one 13 mm bolt to hold the center section in place and four more 13 mm bolts (two on each end) to secure the end pieces. That plus tightening the clamps that hold the boots which connect the center section to the end pieces constitutes the entirely of rehabbing and installing the entire intake system.

Add two more 13 mm bolts if you need to remove the carburetor. 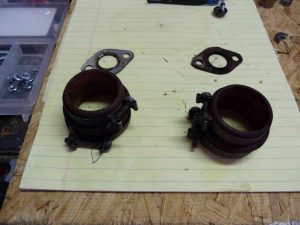 The whole thing – everything – can be removed and re-installed in half an hour with a 13 mm wrench and a flat bade screwdriver.

By the side of the road, if need be. At night. In the rain. By a teenager.

This is appealing – in addition to being cheap.

Thanks to Uncle, the cars available today and recently are not. Which makes them much less appealing, especially to the young – who usually lack both money and tools.

You may have heard of the Hierarchy of Needs. It is a pyramid of things human beings need in order to feel like human beings. At the base of the pyramid is simple physical safety. At the apex is self-actualization, which comes into being as the result – in part – of competence and mastery.

It used to be the case that a kid acquired those things by mastering his first car. Not just learning to drive it but to fix it. The little things first. Spark plugs, fan belts. But by the summer you graduated from high school, you might be an old hand at pulling an engine or putting in a clutch. You definitely knew how to change a tire – unlike the teenager in this makes-your-teeth-ache video:

The cars coming off the line today are undoubtedly technological miracles – magical, almost, in terms of the things they can do. But they are also remote, forbidding things from which we are profoundly alienated – because we do not understand their workings, cannot deal with them. They take us where we need to go, in great comfort and rarely causing us  trouble. But when trouble does arise, we are helpless as H.G. Wells’ fictional Elio. We call for help, someone comes – just like the kid in the video above. 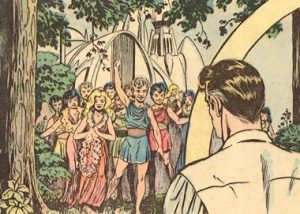 I showed my protege how to solve the problem of the Solex 34 carburetor’s accelerator pump linkage not quite clearing the alternator that had been installed by the prior owner, in place of the factory-installed generator. It was a simple matter of reversing the cam/rod such that their free movement was not impeded by the alternator’s larger-diameter housing. Right as the rain; good as new. Such field expedient solutions are generally not possible with modern cars. Even fiddling with the ignition timing to other than exactly factory specifications can result in OBD (On Board Diagnostics) code contretemps and “check engine” light syncopations.

Besides which you often need a scan tool to adjust a modern car’s timing. To do this job to the Beetle requires  . . . a 13 mmm wrench (to loosen the distributor hold down clamp) and a simple – and cheap – timing gun. About $40 vs. a lot more than that. And you can adjust the Beetle’s (and any other pre-computer car’s) timing in whatever direction you like – as much as you like.

Play with it – see how much the engine likes or doesn’t. 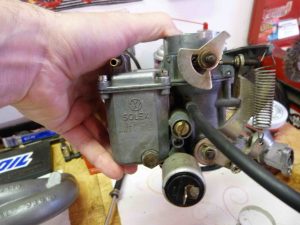 Same goes for the idle speed. Turn a screw in – or out. Tune the engine by ear and by feel. Want a snappier throttle? Install a lighter return spring. More – or less – choke duration is a matter of tension. Fiddle with the adjuster screws until it seems right. And when you get it just right – savor the flavor!

It’s a tactile experience – the difference between stroking the fur of a real tiger and watching a YouTube video about tigers.

My Beetle – the ’73 I used to own, when I was not much older than my protege is now – once suffered an engine fire, the result a fuel belch from the carburetor. This was a fairly common Beetle occurrence and part of the Ownership Experience – like the cable and ductwork “heat” system, which kept you just warm enough in winter to avoid frostbite but not too much worried about it because of the happy brain fog that came from mild carbon monoxide poisoning.

Anyhow, the Beetle backfired through the Solex carb and an auto da fe ensued. Luckily, I had a shovel close by and was able to pitch clods of dirt at the engine, which snuffed the flames.

But not before they consumed the wiring harness. 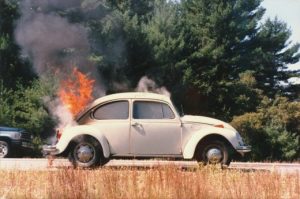 This would be fatal to a modern car. But a Beetle’s wiring harness amounts to a handful of wires – no sensors or computers connected to them. If you can get 12 volts from the battery to the starter, distributor and alternator – and you can rig this almost any way you like – the engine will run.

That plus removing the carb, turning it upside down and shaking out the dirt clods. The car needed a new fan belt, too. But otherwise, good to go.

Once, I was driving along and all of a sudden the engine just  . . . died. I popped the lid and immediately saw the reason why. The Solex 34 has a dime-sized plug on the backside of the casting. Mine had popped out and the gaping hole – and attendant vacuum – leak  made it impossible to restart the engine.

Luckily, I had a dime.

It fit the hole in the Beetle’s carb almost perfectly. I used the tire iron to press-fit it in place. Dab some RTV – room temperature vulcanizing – rubber sealant around the edges. Give it 10 minutes to cure. Back on the road, good as new. The carb still had the dime-plugged hole when I sold the car several years later – for about the same sum I had paid for it a few years prior.

The car took me places, gave me adventures. It made me me sometimes, but never made me feel helpless.

I suspect that the fact such cars are no longer made and have not been for going on a generation largely accounts for the increasing alienation of the current generation from cars. Perhaps indifference is the better word. One uses a smartphone but rarely becomes attached to it.

It is merely a  disposable thing, one much like another and useful a long as it is . . .   useful. There is no affection, no sense of horse and rider – your horse a special horse, unlike anyone else’s horse. Made special by its quirks and the random breakdowns and the things you engineered on the spot to get back on the road again.

That is Sexual Chocolate – the name given by my protege to his Beetle. Which became his not on the day he bought it but on the day he first began to work on it. And discovered that he could – and that it was good.