VW’s new truck – if they build it, which hopefully they will – won’t be the first one.

For a couple of years back in the early ’80s, you could buy a pick-up version of the Rabbit. It was even available with a diesel engine.

Of course, neither of these vehicles are pick-ups, even though they look like pick-ups. 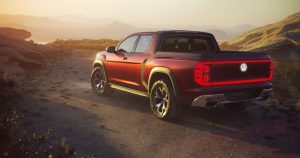 Both the concept Tanoak “truck” on display at the Auto Show up in New York and the Rabbit-based pick-up of the early ‘80s are in fact cars.

Front-wheel-drive, for openers – which automatically disqualifies either from entry into the Truck Club.

A front-drive truck is like a gentle Nazi or a fish that doesn’t swim. 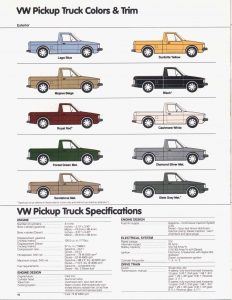 FWD is how most cars are built nowadays because it makes sense from a packaging perspective (engine mounted sideways, with the transmission and axle combined into a single unit and bolted directly to the engine) for more room inside the resulting car. It also lightens up the resulting car – which is a desirable thing when it comes to cars nowadays because it means better fuel economy – which the government requires even if buyers don’t particularly care – and less cumbersome handling as well as (usually) peppier pick-up, because there’s less weight to haul.

There is no heavy rear axle, nor similarly heavy leaf springs. These are truck things. And they are heavy. But they are also heavy-duty and exactly what you want if you intend to haul.

FWD/FWD-based vehicles – this includes “crossovers,” which are just jacked-up cars made to look like SUVs based on rear-drive trucks – have low tow ratings and aren’t built to handle the abuse trucks are designed to deal with.

They have all-wheel-drive, sometimes – but never four-wheel-drive, with a two-speed transfer case and 4WD Low range gearing.

Those are truck things. 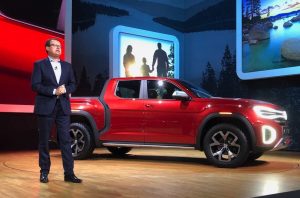 They always have smaller engines – usually fours and sixes.

All of which brings up something no one in New York talked about when VW brought out its Tanoak concept “truck.”

Why doesn’t someone bring out a real-deal car-truck? A latter-day El Camino? Or even a Ranchero?

Both of these looked like cars – but had much more in common with trucks than either the Tanoak or the Rabbit pick-up.

The El Camino (and Ranchero) had beds, just like the Tanoak and the Ranchero. But they also had V8s and solid rear axles and were rear-wheel-drive in their basic layout. 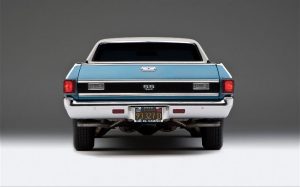 As trucks are laid out.

As cars were once laid out.

Back in the used-to-be days.

The default for most of the history of the American car until the mid-1980s was engine up front (mounted front to rear, not sideways) with a separate transmission bolted to the back of it that transmitted power to a separate rear axle mounted in the rear, via a prop shaft that spanned the distance.

Most of these cars were also beefy body-on-frame construction, again like trucks. 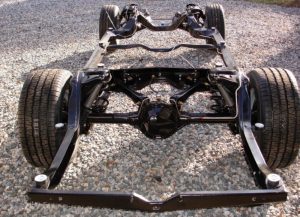 The El Camino of the ’60, ’70s and early ’80s came with (or could be ordered with) the same small-block V8 that powered Chevy trucks. In the early El Caminos, it was even possible to order a big block V8.

Then (in 1975) along came CAFE, the federal fatwa decreeing that all cars must use only so much gas, regardless of buying willingness to pay for gas. If a car used more than the fatwa decreed, fines descended.

Within a few short years, the typical American car became like the foreign car: Smaller, lighter – and based on a front-wheel-drive layout.

Body-on-frame and V8-powered/rear-drive American cars like the Chevy Chevelle/Impala/Caprice (which were the basis for the El Camino throughout its production run) received the Chicxulub Treatment. Like the asteroid that wiped out the dinosaurs, CAFE killed off rear-drive/body-on-frame and V8 powered American cars, or at least mostly so. The difference being that the Chicxulub asteroid was a natural event while CAFE is a government-created thing. 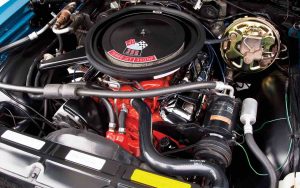 A few of the old stompers survived – kind of like Loch Ness, which is said to be a Plesiosaur – but only in the isolated backwaters of high-performance (e.g., Camaro, Corvette) and high-end (e.g., Caddy CTS, etc.).

Which is why the El Camino and Ranchero disappeared, too.

Which is too bad, because they make a lot more sense as cars that can do truck-ish things than either the proposed Tanoak or the actual Rabbit “truck.” The El Camino/Ranchero could pull and haul, things the car-based VWs aren’t suited for. Their beds are okay for the dog and light loads. For real work, you want a RWD-based layout and – ideally – a hunky V8 up front.

The problem is there’s no reasonably priced/mass market RWD/V8 passenger car platform to serve as the basis of such a thing. VW hasn’t got one, certainly.

The only one that comes close that’s still in production is the Dodge/Chrysler Charger/300, upon which the sun is already setting. It is doubtful these surviving Plesiosaurs will remain in production much longer; the CAFE Crunch is sealing their doom.

So, we’re left with “trucks” that aren’t really – but sort of look like it.

When Heroes Have Nothing Better To Do