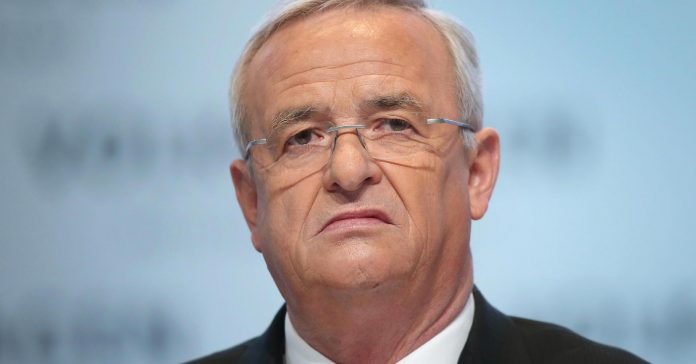 Former Volkswagen CEO Martin Winterkorn has been charged in federal court in Detroit with conspiring to mislead regulators about the German automaker’s “cheating” Uncle’s emissions tests.

Winterkorn, 70, was listed for the first time with five other German Volkswagen executives originally charged in 2016.

The indictment, filed in March under seal, was unsealed Thursday in U.S. District Court. In court filings, U.S. Attorney Matthew Schneider says the indictment was unsealed “because there is no longer a belief that unsealing these documents will compromise an ongoing investigation.”

The indictment alleges that Winterkorn specifically approved the efforts to mislead regulators. The Horror!

He has been charged with heavy-sounding “conspiracy” and “wire fraud.” In fact, his guilt is of the same species as that of the driver who uses a radar detector to “cheat” a speed trap.

“If you try to deceive the United States, then you will pay a heavy price,” he said.

Five additional defendants were indicted in January 2017, but have not been arrested and are free in Germany, where they can escape extradition to the United States as German citizens under the German Constitution. One other defendant, Giovanni Pamio, 61, an Italian citizen and former manager at Audi AG, has been charged and currently remains in Germany pending extradition, U.S. Department of Justice officials said.

In the indictment unsealed on Thursday, Winterkorn is alleged to have been informed in May 2014 and July 2015 of the efforts to cheat emissions tests in the United States. It further alleges that Winterkorn, armed with that knowledge, “agreed with other senior VW executives to continue to perpetrate the fraud and deceive U.S. regulators,” the Department of Justice (sic) said.

The indictment alleges that, at that meeting, Winterkorn did not order his subordinates, including Schmidt, to disclose the cheating, but instead agreed to continue to attempt to deceive regulators.

On Sept. 3, 2015, VW officially admitted that it had installed defeat devices in various 2.0-liter diesel vehicles sold in the United States. The company pleaded guilty to three felonies in March 2017 and agreed to pay $4.3 billion in penalties.