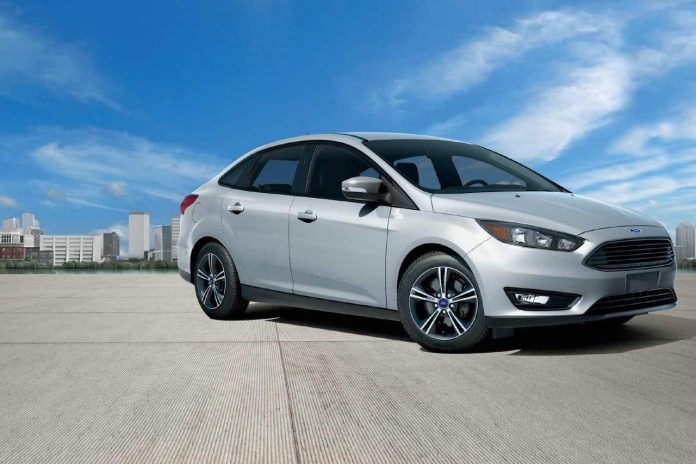 I often envy the original gangsters – guys like Brock Yates, for instance. He invented the affectionate term, shitbox. Or – going back even farther – Uncle Tom McCahill. The guys who wrote about cars when cars were different – often profoundly so.

They had material to work with.

It was literature, at times. And sometimes, scary literature. 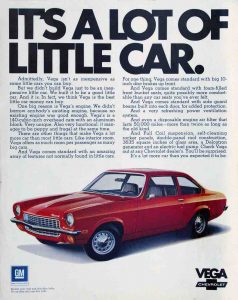 Try to imagine new cars like the Chevy Vega, as a for-instance. That a major car company would actually have the contempt for sound design – and for its customers – to put on the market a car with an aluminum engine without steel liners. The thing would burn a quart of oil every several hundred miles – within a few thousand miles of leaving the showroom.

There were also brilliant cars like the VW Beetle, which may have had Nazi antecedents, but so what? The air cooled, rear-mounted engine was as simple as a Briggs & Stratton law mower and almost anyone could fix almost anything that went wrong with it. Plus the thing had personality.

Every drive was an adventure. And that adventure was a deep vein of material; there was always something different to write about.

Fast-forward to now – and consider the plight of guys like me, the End Times car journalists whose brutal job is to try to explain what makes Crest different from Colgate on wheels. 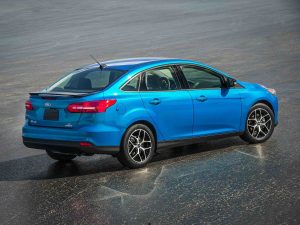 The Focus is Ford’s compact sedan and five-door hatchback.

What makes it different? Not much. Which isn’t very bad – or very good. I am casting around for something as I stare at this keyboard…  .

Well, there’s this: Ford has announced it will be discontinuing most of its cars – in favor of crossovers and SUVs – so that’s a difference. And that will probably make a difference as far as what you’ll pay for a new Focus vs. rival small sedans like the Honda Civic, Mazda3 and Hyundai Elantra – among others.

There are some other differences, too –  among them the Ford’s unusual (for the class) three cylinder engine – which is actually the optional engine. 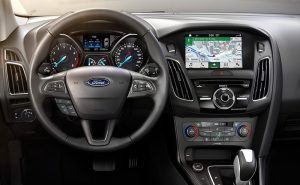 Also that it’s available with an automated manual transmission – which is fairly exotic stuff for a car in this price range.

At least, for Europe – where people still seem to like sedans. It is very possible that Ford will only offer the hatchback version over here. Because people here seem to not like sedans anymore.

There’s nothing bad about it. 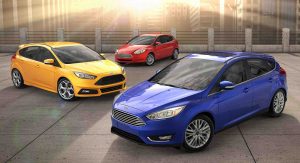 Base S trim is well-equipped with the necessaries (AC, a 4.2 inch LCD touchscreen, most power amenities, a tilt and telescoping steering wheel) but without the addled-driver/idiot-proofing “assists” that are becoming standard in so many new cars.

Nothing exceptional about it. 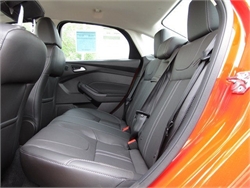 Newer rivals like the just-redesigned Civic match the mileage of the Ford’s optonal engine with their standard engine.

Tight back seat (33.2 inches of legroom – almost four inches less than the new Civics got).

The as-it-comes Focus is powered by a 2.0 liter, 160 hp four cylinder – available with either a five-speed manual transmission (standard) or a six-speed automatic (optionally). 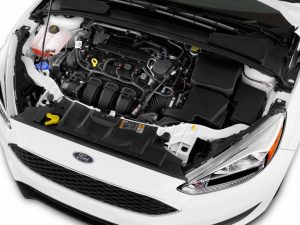 The Ford’s optional engine is a 1.0 liter three cylinder.

It’s smaller than most full-sized motorcycle engines – and has one less cylinder than most of them, too. 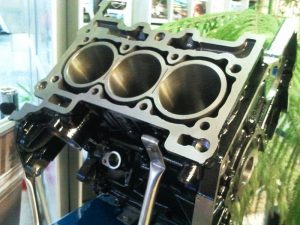 On the downside, the higher-mileage turbocharged three cylinder engine isn’t standard – and isn’t available in the lower-cost S trim version of the Focus sedan.

Two years ago, the Focus’ three-cylinder was tops in its class as far as mileage – but the others have caught up – and they don’t charge extra for the MPGs. 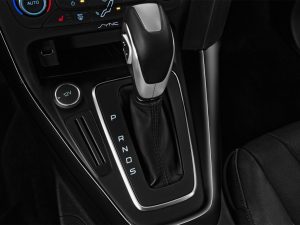 There is also a difference in terms of acceleration.

While the 1.0 liter EcoBoosted Focus with the optional six-speed automated manual is the most fuel-efficient version of the Focus, it’s also noticeably the slowest. This combo takes about 9 seconds to make it to 60. If you shift for yourself – with the six-speed manual (an upgrade over the five-speed manual that’s standard with the 2.0 liter base engine) you can gain back one full second – at the cost of a couple of MPGs.

The crossover SUVs which are driving sedans like the Focus to extinction are more versatile. They have more space, offer more capability – including (usually) available all-wheel-drive. Which for whatever reason is almost unavailable in most non-luxury sedans. 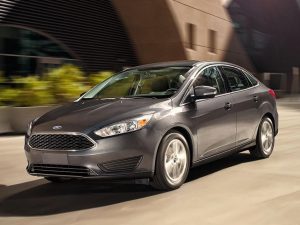 But crossovers are also compromised.

They ride high – which isn’t optimal for high-speed handling. And they’re heavier – which causes them to use more gas; this in turn puts pressure on their manufacturers to get rid of manual transmissions – since an automatic can usually be programmed to squeeze out an extra MPG or two over a manual. Which is a huge big deal given the pressure to comply with the government’s fuel economy fatwas.

Which is why almost all crossovers are automatic-only.

Sedans like the Focus sit lower – so you’ve got a lower center of gravity, which is a natural stability enhancer. They are lighter, so they sill perform decently with smaller engines while also posting good gas mileage numbers. That, in turn, makes it feasible for their manufacturers to continue offering them with manual transmissions. 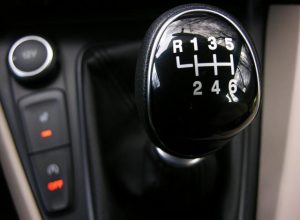 So what you’ve got here – and at Mazda and Honda, too – is a car that may not be as practical as a crossover but is more fun to drive, especially if you drive at a clip above the pace of the herd.

Keep in mind that even the base Focus is two-thirds or more a Focus ST – the high-performance version of the Focus. It hasn’t got the ST’s 252 horsepower engine or the suspension/wheel and tires upgrades.

But the basic car is the same car.

Unlike most crossovers, it corners flat – no uneasy feeling that you’re about to be cornering on two wheels because you entered that curve a little hot. And it’s noticeably more stable if you have to jerk the wheel hard left to avoid a deer that just jumped into the road.

And there’s another perk. It rides better than the ST – which is brutally stiff (which is probably why it hasn’t sold very well, despite how fun it is to drive… briefly). 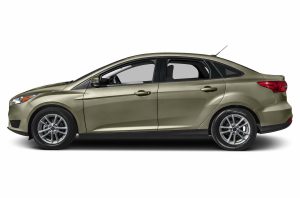 The Ford has best-in-class driver/front seat passenger legroom: 43.1 inches. But the backseat only has 33.2 inches of legroom – which is much less than in the new Civic (37.4 inches) and noticeably less than in the Mazda3 (35.8 inches).

But the Focus does have more backseat headroom than most of its rivals: 38 inches vs. 37.2 in the Honda and 37.6 in the Mazda. It doesn’t sound like a big difference on paper, but if you’re  six-footer, it can be a difference that makes all the difference. 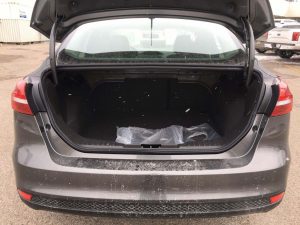 Which is probably why  the hatchback will survive the decimation that’s on deck.

On the other hand, you can upgrade to an 8-inch touchscreen that’s bigger and (arguably) nicer than the best-you-can-get in the Mazda3 (even top-of-the-range Gran Touring trims get the same 7-inch screen as the base trim). 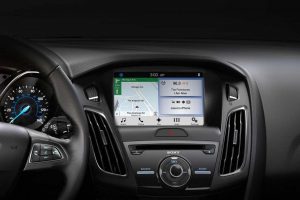 Additionally, Titanium trims get Ford’s unique exterior touchpad entry system, which you’ll appreciate if you ever misplace your key fob. Other niceties include exterior puddle lamps, heated seats and steering wheel – still an unusual feature in this price range.

The Focus also has an emergency brake lever – the kind you pull up to engage the rear brakes manually. This is a genuine emergency brake – as opposed to a parking brake that’s engaged electronically, by pushing a button. 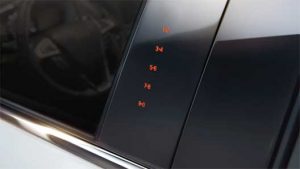 The pull-up emergency brake is something you can actually use to slow the car in a controlled manner if the main brakes ever fail, which you can’t do with the electric-activated button brake. It is impossible t modulate braking pressure manually; it is either On or Off.

More importantly, you can use the pull-up emergency brake lever to have fun with the car – by locking up the rear wheels and simultaneously hard-cranking the steering wheel to perform Secret Service-style 180s. 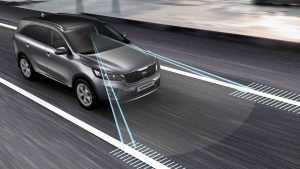 The base S trim happily lacks almost all of the annoying, peremptory saaaaaaaaaafety “assists” which are practically being force-fed to us by the government and the car companies.

For instance, the Lane Departure Warning and steering “assist.”

The premise is that people can’t be expected to keep their car in its lane, as that might interfere with checking emails or sending texts. So the car “assists” by steering itself back into line when it wanders off onto the shoulder or across the double yellow and into the path of opposing traffic.

But if you’re not checking emails or texting, the car countermanding your steering inputs  – as it will do even when it’s your intention to make a lane change but have failed to activate your turn signal (which you might not want to do if there’s no reason to do so, as when there’s no traffic anywhere in the vicinity) is as annoying as a mother-in-law who won’t shut up.

Thankfully, this system is optional.

But the soon-to-be-here 2019 Focus – which will be arriving at dealerships in a few months – will likely include things like Lane Keep Assist as standard equipment.

You have been hipped. 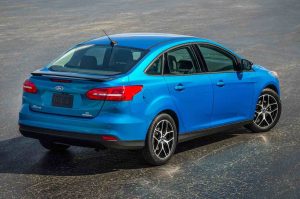 If you’re among the dwindling few who still like sedans – and don’t like naggy tech – better hurry.

The Virtue of the Fear Mask

Hershey Car Show Corona’d . . . But Not By The Virus 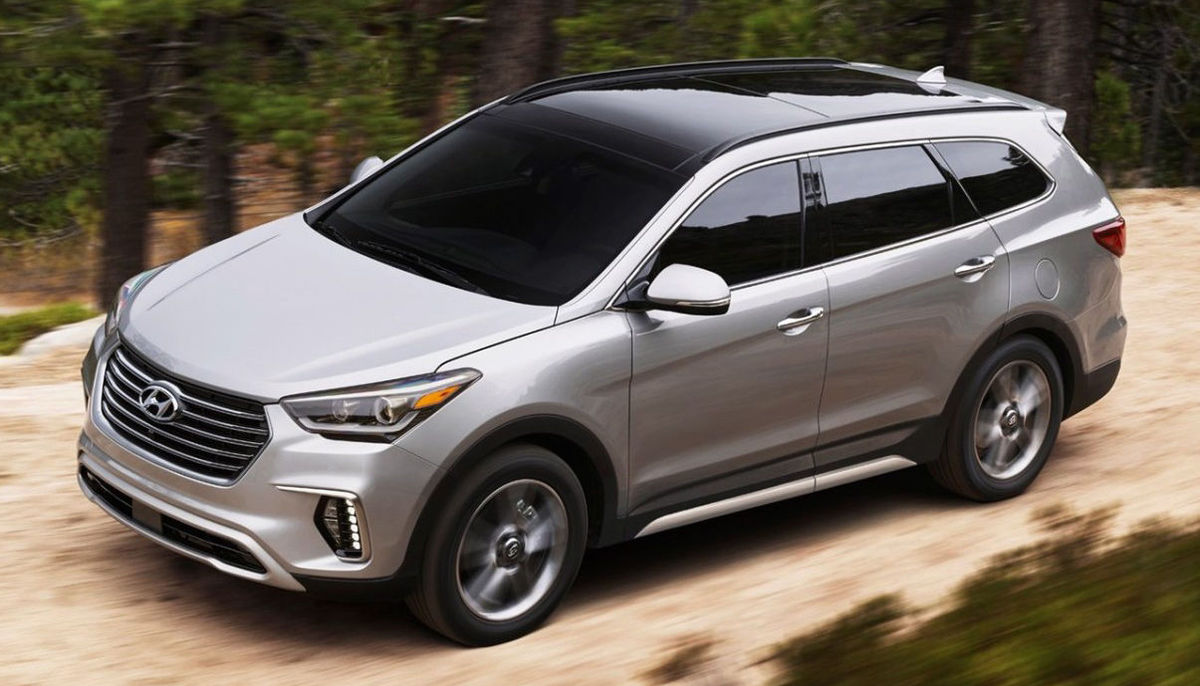