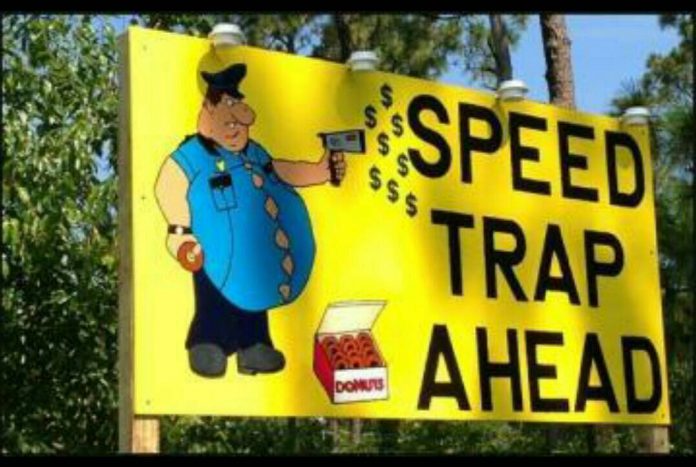 The main problem with speed limits is they’re not.

In a legal sense – yes. You are not legally allowed to drive faster than whatever the number on the sign is. But as a speed limit, the concept is idiotic.

Airplanes have speed limits. If you operate beyond the limits of the airframe, the plane will begin to physically disintegrate, stall or some other catastrophic thing.

These are speed limits which must be obeyed for actual safety – as opposed to keeping oneself safe from the predations of armed government workers (who will themselves “speed” in order to catch you in order to ticket you – proving that “speeding” isn’t unsafe, merely illegal… well, for us).

Because speed limits are mere legalisms, understood by all to be such – almost everyone drives at least as fast as the speed limit – luminous evidence that it is not a limit in the physical/mechanical or “safety” sense.

They are merely rules – which almost everyone ignores.

People get angry when they fall in behind a driver who is only going the speed limit. Almost everyone drives a little bit faster than whatever the posted limit is – as much as they think they can “get away” with.

As a practical matter, speed limits are the minimum speeds of travel on most roads.

This of course renders the term a species of illiteracy – unsurprising given the source. The same source that characterizes as “customers” people who are forced to hand over money for services they neither asked for nor use. 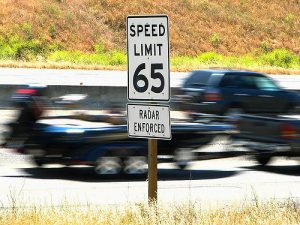 This is easily demonstrated.

Most highways on the East Coast of the U.S. have posted speed limits of 65-70 MPH. If you drive that slowly, you risk being run over by a tractor trailer and will have other cars running up your tailpipe. So you kick it up to 75 or so – which is illegal “speeding” but is actually the safe speed you need to drive to avoid being run over by traffic.

But how much faster than 75 or so is the safe limit? How would you know?

There is no one-size-fits-all answer, of course. Variables include the skill of the driver as well as the capabilities of the car. But paying attention to whatever the sign says is as value-less as heeding the warning label on mattresses about it being a high crime to tear it off.

The sleepworthiness of the mattress is not affected by the presence – or absence – of that label. 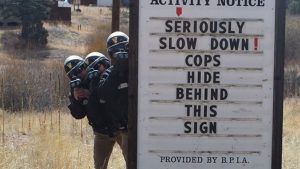 Just as the “safety” of your driving bears almost no relationship to your obedience to speed limits and actually becomes dangerous when you do obey them (as on the highway but not just there).

Speed limits would be useful as information – as opposed to pretexts for mulcting – if they served some genuine advisory purpose such that ignoring them actually did risk real danger and not just the kind that is visited upon us by armed government workers. They could and should work like signs warning drivers about deer crossing the road, to be on the lookout for fallings rocks, that the surface of a bridge tends to ice up before the rest of the road does.

Only a fool – or someone actually reckless – doesn’t at least almost stop at a stop sign. And irrespective of the fear of being mulcted by an armed government worker. Because to ignore that sign is to risk something much worse than extortion. It is dangerous to ignore a stop sign – which is why most people do not ignore them.

Speed limits could and should work that way, if people knew that ignoring them entailed a real chance of similar consequences. But speed limits are universally ignored precisely because the only real consequence of ignoring them is a roadside mulcting by an armed government worker.

The government would, of course, not reap as much revenue if speed limits actually were something other than legalisms, pretexts for separating safe drivers from their hard-earned money.

But  the roads would be a lot safer if drivers respected speed limits because those limits actually meant something other than being a pretext for separating them from their hard-earned money.