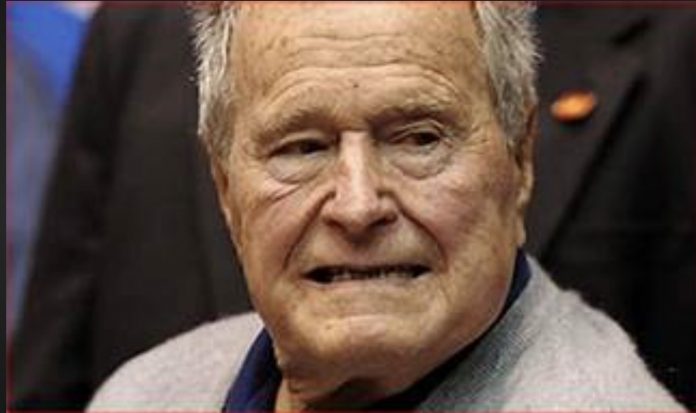 A bit of good news: George H.W. Bush is dead, finally. At least he’ll do no more harm. But the harm he did do was enough.

Like the Nazis his father did good business with, Bush wanted a New World Order – and spoke of it lovingly and often. And now it’s upon us, in no small measure because of his machinations and those of his frog-torturing, mass-murdering, war criminal son – who was elevated to the position from which he was able to commit mass murder solely on the juice provided by his connected father.

The entire Bush family is a crime syndicate that puts the Corleones to shame (with George W. Bush playing the role of Fredo).

Bush Sr. – who wasn’t in Dallas on November 22, 1963 and not a CIA officer at the time – was later proved to be both of those things. His leprous fingerprints are all over the termination of the last American president who wasn’t a wholly owned subsidiary of the military industrial complex.

The Bush family was also good friends with another family. The Hinckley family. And then a curious thing happened on March 30, 1981.

And the leprous hands assumed control of the tiller. The chastened Gipper knew where things stood after that.

In due course, the anointed one officially assumed the purple – and we got the No New Taxes his lips told us not to read.

He then worked with Clintigula to stomp Ross Perot, who told us all what was going to happen as a result of the “free trade” deals being stuffed down the throats of the American people like a pate de foi gras goose.

Now there will be a period of unction and prostration before the effigy of this quintessential political hack and fixer, who used this country like a Twink at San Quentin for the advancement of his loathsome family’s interests.

It is only because of the out-of-nowhere good fortune of the Orange One that we are not currently afflicted with another Bush’s hands on the tiller. We have that to be eternally grateful for, at least.

Meanwhile, the corpse of the creature will be displayed like Lenin and Stalin for the wailing and gnashing of teeth. But the guy who takes out the trash each week is deserving of infinitely higher esteem.

He, at least, does productive work and hasn’t killed anyone.

But it is not too late to make good use of the stringy old stiff. There are homeless cats that need to be fed. Possibly also some experiments could be performed that would yield scientifically valuable information – such as how long does it take various acids to penetrate the scaly skin of bipedal reptiles? How long to render one into so many gallons of viscous goo, to be flushed down the toilet and out to sea… the only fitting burial for the thing called George H.W. Bush. Never miss out a single deal from their range.

Good riddance rather than goodbye.

Hope is Not Lost