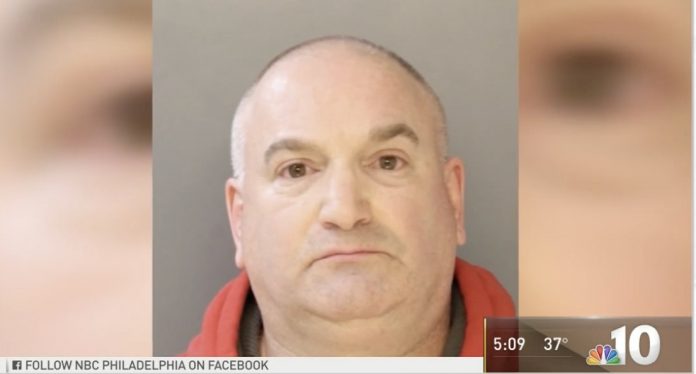 NBC news reports on the indictment of a Philadelphia, PA armed government worker – a detective – who is accused of serially raping/sexually assaulting male victims over the past 14 years… undetected, apparently.

Philip Nordo allegedly “groomed” his victims during ongoing investigations and engaged in conduct to make these men “more susceptible to his sexually assaultive and/ or coercive behavior,” a heavily-redacted grand jury report said.

He was denied bail. His next hearing is set for late March.

Nordo, 52, was fired in 2017 after serving 20 years on the force in some of the department’s most prestigious units including the Homicide Unit.

He first joined the police force in 1997 and was promoted to detective in 2002. Seven years later, he was on the Homicide Unit. During that time, Nordo “used his position of authority” to intimidate, rape and assault men associated with his cases. He then bullied them into silence, heavily-redacted report said.

In at least one instance, Nordo stared at and commented on a man’s penis while the suspect was under arrest. He also discussed having sexual relationships with his victims over the phone using code words, the grand jury found.

He asked incarcerated sources to tell him when so-called “homosexual inmates” were to be released “so he could have sex with them or sexually groom them,” according to the report.

Much of this behavior occurred during active investigations. He also volunteered to work closely with his victims, including transporting inmates and witnesses for other detectives. These encounters allowed him to identify new victims or conceal his relationships with existing victims, the report said.

He often targeted people who were already handcuffed or shackled, according to grand jury findings.

He also diverted up to $20,000 from the Mayor’s Office’s Crime Reward Program to his victims he favored. Nordo would pay off his victims using city money, according to prosecutors, with the detective submitting witnesses involvement in investigations to crime reward programs.

Victims alleged Nordo would display his firearm during these grooming sessions and would tell suspects no one would believe them if they reported the alleged incidents.

AGWs from Internal Affairs conducted an interview with the victim, according to the grand jury’s report. The victim was murdered 10 years later — a case that remains unsolved.

The status of the internal investigation remains unclear.

The Philadelphia Inquirer reported in July the district attorney’s office had agreed not to challenge the dismissal of charges in at least one murder case where Nordo had been accused of having inappropriate contact with several witnesses. A second suspect who had pleaded guilty to charges in the same homicide was granted immediate parole instead of being sentenced to potential decades in prison.