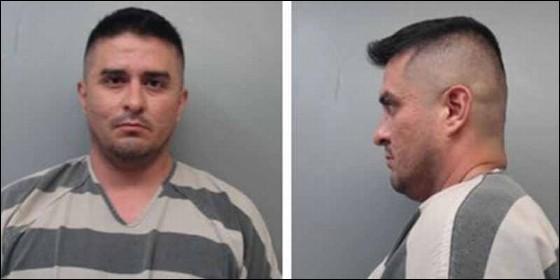 Here’s another AGW who enjoyed killing people off “duty.”

Juan David Ortiz, 35, confessed to killing four people between September 3 and September 15, according to a criminal complaint filed in Webb County, Texas.
Ortiz was charged with four murder charges and one unlawful restraint with aggravated assault with a deadly weapon, according to Webb County District Attorney Isidro R. “Chilo” Alaniz.
The bodies of four victims were found over the past two weeks, sheriff’s spokesman Eduardo Chapa told CNN. Chapa said investigators are not ruling out the possibility of more victims. An affidavit originally described the victims as three women and one man but the sheriff’s office later said that the victim identified as male was a transgender woman.
The victims were shot in the head, according to the affidavit. All of the victims worked as prostitutes, authorities told CNN.
“He was profiling certain kinds of victims,” Alaniz said, adding “the suspect was hunting for his victims.” The prosecutor says he feels comfortable describing Ortiz as a serial killer.
It was not immediately known whether Ortiz has an attorney.
This is not the first case of an AGW who turned out to be a serial killer. There’s BTK, for one. And there’s Joseph DeAngelo (here) for another.
It is very interesting that the profession of AGW attracts so many serial killers. But it ought not to be surprising that so many serial killers are attracted to the profession of AGW. It’s the same reason, basically, that draws child molesters to the Catholic priesthood.
In both cases, these lines of work offer both camouflage as well as access to victims.