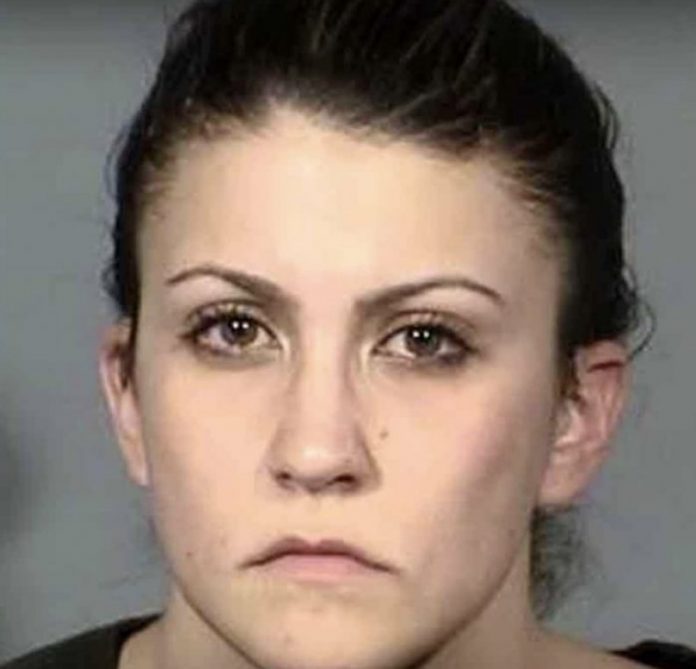 Some of you will be familiar with Ilse Koch – infamous wife of Buchenwald concentration camp commandant Karl Otto Koch. She was tried after the war for her sadistic treatment of the inmates.

She appears to have been reincarnated in the person of Las Vegas AGW Rachel Sorkow, who took videos with her cellphone as she forced a mentally ill man to dance for her, taunted a man as a fellow AGW force-fed him gummy bears, recorded herself demanding to see a handcuffed man’s genitalia and used every racial slur under the sun to berate and abuse her victims. Her conduct was so egregious she was actually arrested this month and charged with multiple felonies.

The videos surfaced as investigators were probing allegations that Sorkow was providing private information to associates from official police systems, police said.

Text conversations and records show that Sorkow searched for information on behalf of her associates that included background information on dating prospects, addresses and a non-redacted report on a child abuse investigation that named the children, police said.

Sorkow, 29, was arrested Tuesday on five felony counts of misconduct by a public officer, and one gross misdemeanor each of capturing the image of the private area of another person and indecent exposure, Metro said. She was relieved with pay in December and dismissed this week.

According to an investigatory report, Sorkow bragged to several people about one of the videos she took of forcing a mentally ill man to dance for her pleasure.

”I just want to see you dougie (sic) and twerk and then we’re good,” Sorkow is heard saying. “Come on!”

The mentally ill man was reportedly wearing a dress and Sorkow would rap while she forced him to dance.

In one of the conversations, according to the Sun, an unnamed Metro officer — who a couple of months later “intentionally” stopped the same man, sends her a message — “bahahaha ran into your boo lol shouted you out hah.”

She replied, “I have fun with these f*cks hahaha.”

In another incident, also caught on video, Sorkow has a man in handcuffs, who is forced by AGWs to eat an entire bag of gummy bears.

“Partners with the community, feeding criminals gummy bears,” Sorkow is heard saying on the video, which is an apparent reference to the department’s slogan.

The video shows another unidentified AGW shoving the gummy bears into the victim’s mouth. “Was that good, bro?” she asks. “Is that scrumptious,” the other AGW is heard saying.

When higher-up AGWs confronted her about the degrading acts caught on video, Sorkow had no problem admitting to them. She even laughed while admitting to it, according to her arrest report. “That’s not malicious, again, like … that’s just who I am, I like joking, I joke all the time.”

In yet another disgusting display, Sorkow is seen forcing a man to expose his genitalia.

The man was reportedly in handcuffs when he began kicking a patrol car. When he raised his legs, it would expose the man’s penis.

“Do it again,” Sorkow is heard telling him. “When (redacted) raises his right leg, his penis is exposed through the rip, making it clearly visible to Sorkow” and everyone else, police wrote.

Sorkow giggles and zooms her camera to the man’s groin area. “Do it again!”

After telling the man to expose himself, Sorkow then begins using the racial slurs. “What’s up my n****,” she is heard telling the black man.

“And what are black people?” she says as she has the man repeat the n-word.

Though charged with serious crimes, Sorkow was placed on paid vacation and released on an absurdly low $5,000 bond.