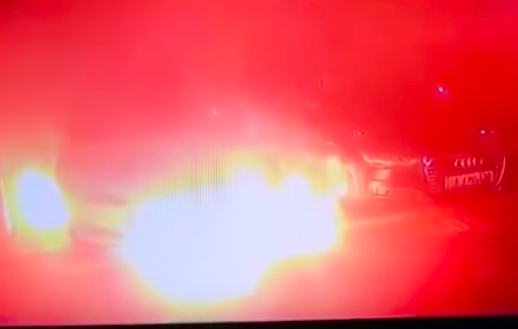 Well, this is toasty!

Video has surfaced of a parked Tesla Model 3 erupting into flames. These things can kill even when they aren’t moving, apparently.

This is a dubious “first.”

There have been cars that do not perform well in crash tests; there have even been crash-prone cars. But they were safe when standing still. Teslas apparently aren’t. This one just spontaneously combusted. And when it lit up, it took out at least three other cars parked within the orbit of the auto-da-fe.

Luckily, no one was killed.

This time. But how about next time?

Better to park outside – as far from your home and family as possible. And from your business. Or anything else you’d rather not see burned to charcoal.

Maybe there should be reserved spaces for electric cars, complete with automatic chemical fire extinguishing systems – which ought to be mandatory.

Cost is already no object when it comes to electric cars. Limitless money (other people’s money) has been hurled into the proverbial – and actual – electric car bonfire. More can’t hurt, right? 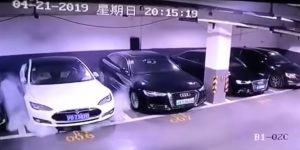 There are IC No Go zones  – premised on the allegation that internal combustion presents a danger to public (but never a specific individual’s) health. Well, here we have a type of car that is demonstrably dangerous; which has actually killed people and will almost certainly kill again.

Maybe there should be EV No Go Zones, too.

Schools and surrounding areas, for openers. Isn’t the saaaaaaaaaaaaaaaaaaaaaaaaaaaaaaafety of “the children” important? There is hystericized speed enforcement near schools, even when school is not in session, on the theory that a car traveling  at a rate faster than a man can jog poses an intense threat to any tot who might be in the area.

Well, what about a Tesla parked right outside a classroom, or anywhere near where kids might be playing? We have proof that these cars can explode without warning, spewing not just fire but toxic fumes.

How, pray, is this allowed? 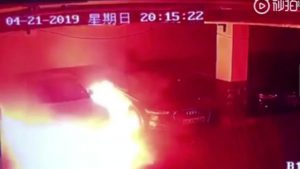 It is allowed because it jibes with the Agenda – on the same general reasoning that the Catholic Church covered up the doings (and diddlings) of pedophile priests, i.e., the “greater good.” It is important to preserve the sanctity of electric cars; to not scare people off.

But the fact is that EVs are uniquely dangerous. Tremendous voltage (400 volts or more) stored in a highly reactive battery pack that can – and has – caught fire without an external ignition source.

All it takes is a short circuit or physical damage to the battery pack itself, which triggers the short circuit.

Gasoline is inherently much safer. It only burns when vaporized – and only when there is an ignition source. A gas tank damaged in a wreck does not result in a fire unless there is a spark. Liquid gas can be dripping out – and so long as there’s no spark, there is no fire. 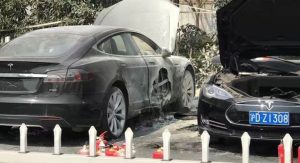 Gasoline is stable. Diesel even more so. It is almost impossible to ignite diesel without compression and heat. You can throw a match onto a puddle of diesel and it usually won’t burn.

But lithium-ion battery packs can – and have – just lit up. Even when the car they are in wasn’t hit by anything. Like the cell phones which have taken down airplanes. They, too, just went into thermal overload and now we’re cooking.

Tesla, as usual, is denying there’s a problem.

“We immediately sent a team onsite and we’re supporting local authorities to establish the facts. From what we know now, no one was harmed,” Tesla said in a statement.

Well, sure. No one was harmed – because (fortunately) no one was nearby. Or sleeping in any of the cars parked nearby. If they had been, they would have been hurt – a point the Teslian statement misses. 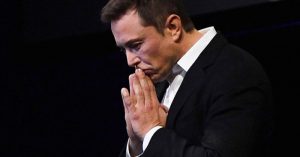 There have been at least 14 instances of Tesla cars catching fire since 2013, with the majority occurring after a crash.

“The car fire is just another data point of continued difficulties,” Roth Capital analyst Craig Irwin wrote in an email. “Not a lot of good news for Tesla these days.”

Indeed. Shares were down 4 percent when the news of the Shanghai fire erupted.

Tesla will report its first-quarter results tomorrow; the company has pre-emptively stated it will post yet another in a series of losses going on now for the past almost 15 years.

Amazing what crony capitalism can do.

But that’s just the point. The crony part. Tesla survives because it does not have to abide by the rules of capitalism – the prime directive of which used to be: Make a profit by convincing enough people to give you more money for an item than it cost you to make it.

It is much easier to take money  by serving the interests of the busybodies and control freaks who constitute “the government.”

They want us in EVs, no matter how much it costs us – and even if it kills us.

On Us vs. Them