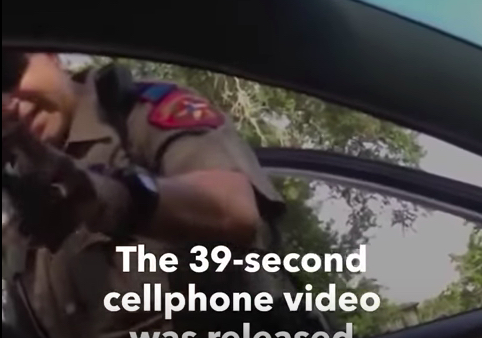 A video of the assault perpetrated upon motorist Sandra Bland by an armed government worker more than four years ago has surfaced. It’s video taken by Bland of her Hut! Hut! Hutting! at the hands of a Texas AGW who used his gun and badge and threat of murderous violence to “pull over” Bland for supposedly failing to signal before she changed lanes.

This minor infraction escalated into an ultra-violent Hut! Hut! Hutting when Bland declined to obey the AGW’s order to stop smoking . . . in her own car. Something which isn’t illegal but represented defiance of the AGW’s Authority.

Bland was arrested and caged – and dead three days later, under circumstances that remain murky to this day.

The AGW was initially indicted for perjury regarding the made-up charges, but these were eventually dropped.