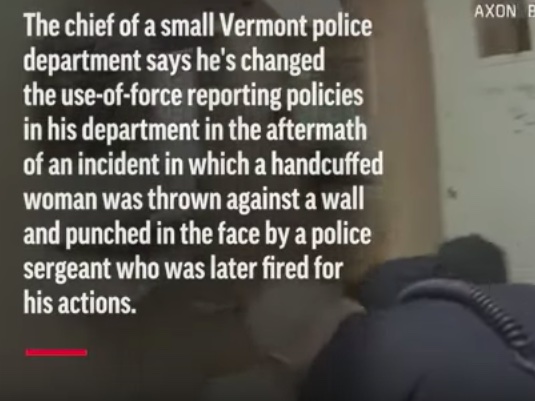 Another video has surfaced of another armed government worker punching out a victim – a woman – with her hands literally tied (manacled) behind her back.

The woman, who had been arrested for something or other, can be seen in the video below sitting in a jail cell, her hands cuffed behind her. She is upset and kicks at the door to her cell. This infuriates the AGW, who decides to tune her up for being disrespectful of his Authority.

First, he pushes her – full force – against the cement wall, warning her to “listen to me real good” (this AGW having never mastered elementary school grammar, which probably accounts for his government employment).

When the woman – who is crying at this point and says, “he hurt me” – doesn’t assume the proper attitude of submission, the enraged AGW rushes into her cage and delivers a right hook to the woman’s face. The woman is completely exposed; she cannot put up her hands to ward off the blow – her hands being manacled behind her back.

It is important to note that at this moment, all the woman is doing is sitting on the bench and crying . . . and, of course, not being sufficiently submissive in attitude.

Two other AGWs assist their colleague, a “sergeant” – in air quotes to emphasize the stolen valor of civilian government workers who aren’t in the military but award themselves ranks.

Neither intervenes to protect the woman from a criminal assault by their psychopathic “sergeant,” for reasons of either poltroonery, indifference or camaraderie.

The woman is left to sit, her face bloodied from the violent assault of a “man” who lost control of himself and punched out a handcuffed woman who posed no conceivable “threat” to his “safety” but had affronted his childish sense of importance.

Ultimately, two of the three “heroes” lost their government jobs . . . with this government employer. They are not barred from seeking employment as armed government workers with another “department” in another state – notwithstanding that they are clearly guilty of having committed a criminal physical assault.

Neither “man” was arrested or charged with anything.

Yet had the woman – or anyone else – punched an AGW, she would have almost certainly been charged with felony assault upon an “officer” and faced not just prison but lifelong repercussions as a convicted felon.

The double standard is halting.

Speaking of which. You may have read or heard about the mayor in California who has proposed that all gun owners be required to carry liability insurance – because they “might” harm someone with their gun.

The proposed law does not apply to AGWs, who are specifically exempted from its provisions. Because AGWs never harm people with their guns.